Masses of vehicles move slowly on the Montrose Ave overpass at the 1-90 Kennedy Expressway and the I-94 Edens Split the day before Thanksgiving in Chicago, Illinois. (Photo by Patrick Gorski/NurPhoto via Getty Images)

There will be little chance of escaping the crowds on the road, at the airport and even on the rails this Thanksgiving.

More than 55 million people are expected to travel 50 miles or morefor the holiday this week, according to AAA. That would be the most Thanksgiving travelers since 2005 and a nearly 3% uptick from last year.

Wednesday and Sunday will be the worst days for the road with traffic delays 3.5 times longer than normal in major metropolitan areas the day before Thanksgiving. 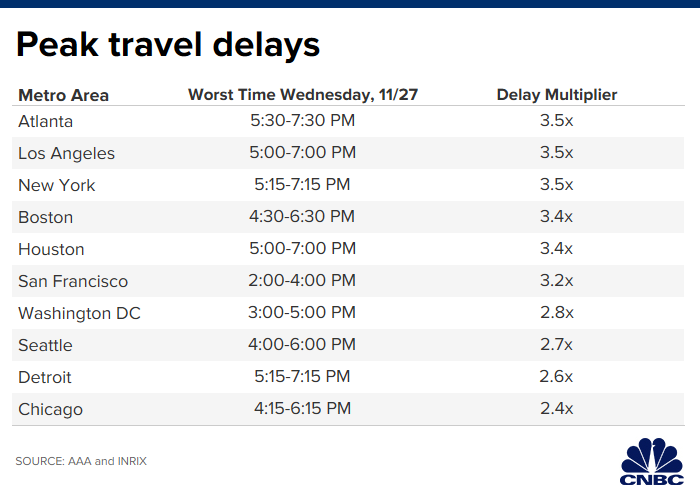 While taking a train may seem easier than traveling by road or air, this is the busiest week of the year for Amtrak too. Amtrak is expecting a volume this week similar to last year’s record of more than 846,000 passengers — and is deploying every working train car in its fleet to meet the surge in demand.

New York’s Penn Station, an Amtrak hub, saw an almost 58% increase last year from normal passenger traffic on the Wednesday before Thanksgiving and an almost 54% increase on the following Sunday. In Chicago and Boston, the number of passengers rose by more than 80% on those days when compared with normal volume. The best way to keep track of possible delays is to use Amtrak’s train tracker and show up early in case of long wait times, said Amtrak spokesman Jason Abrams.

Ride-hailing apps such as Uber and Lyft also expect a spike in demand.

To avoid any unexpected surge in prices, Lyft recommends using their scheduled rides feature to lock in a predicted rate based on average fares at that time. For the 43% of riders who use Lyft to get to the airport, Lyft also partners with Delta and Hilton to give passengers extra Delta SkyMiles or points in the Hilton Honors rewards program.

Inclement weather threatens to throw another wrench into Thanksgiving travel plans, with heavy rain and snow expected across the central U.S., plus northwest California and southwest Oregon. Heavy snow has already started to impact Ohio, Pennsylvania, Massachusetts and Vermont.