Earth may not be the best planet for life — with some exoplanets orbiting distant stars having the potential to host a more diverse and abundant array of life.

This surprising conclusion came from US researchers who used a NASA climate model to explore the most habitable exoplanets — those outside our solar system.

The team found that planets with more dense atmospheres, slower rates of rotation and the presence of continents all lead to more efficient ocean upwelling.

This, in turn, creates a more potentially hospitable ocean for alien life.

The findings might help focus the future of our search for life on other worlds.

Earth may not be the best planet for life — with some exoplanets orbiting distant stars having the potential to host a more diverse and abundant array of life. Pictured, an artist’s impression of the various exoplanets in the TRAPPIST-1 star system

Geochemist Stephanie Olson and colleagues at the University of Chicago used software developed by NASA to model the likely conditions on different types of exoplanet — in particular, their climates and potential ocean habitats.

‘NASA’s search for life in the Universe is focused on so-called Habitable Zone planets, which are worlds that have the potential for liquid water oceans.’ said Dr Olson.

‘But not all oceans are equally hospitable — and some oceans will be better places to live than others due to their global circulation patterns.’

The researchers were able to use their models to determine what kinds of planets were most likely to be able to develop and sustain a variety of life.

‘We have used an ocean circulation model to identify which planets will have the most efficient upwelling and thus offer particularly hospitable oceans,’ Dr Olson said.

‘These are the conditions we need to look for on exoplanets,’ said Dr Olson.

‘We found that higher atmospheric density, slower rotation rates, and the presence of continents all yield higher upwelling rates.’

From this, the researchers conclude that Earth may not be the optimum planet for life — and more hospitable worlds may exist elsewhere in the cosmos.

‘This is a surprising conclusion,’ said Dr Olson.

‘Conditions on some exoplanets with favourable ocean circulation patterns could be better suited to support life that is more abundant or more active than life on Earth.’ 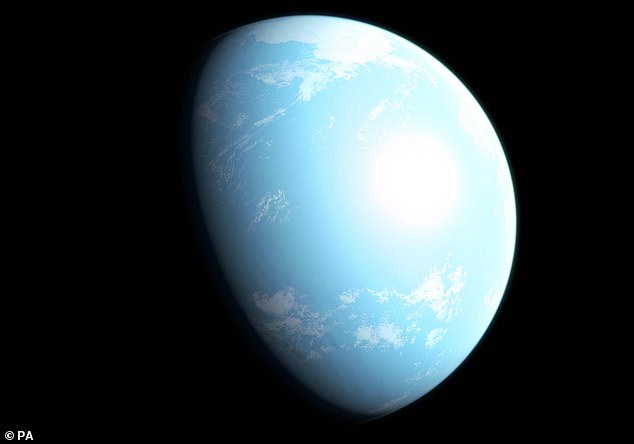 The team found that planets with more dense atmospheres, slower rates of rotation and the presence of continents all lead to more efficient ocean upwelling

Inherent limitations in our astronomical technology will always mean that life itself will be more common than detectable life.

Given this, Dr Olson said, our search for life elsewhere in the universe would be best targeted at those habitable planers which are more favourable towards varied and globally-active life.

‘Those are the planets where life will be easiest to detect–and where non-detections will be most meaningful,’ she added.

At present, we have not developed telescopes powerful enough to identify appropriate exoplanets and test the researchers’ conclusions — but Dr Olson is hopeful that this will soon change.

‘Ideally this work this will inform telescope design to ensure that future missions — such as [NASA’s] proposed LUVOIR or HabEx telescope concepts — have the right capabilities,’ she said.

‘Now we know what to look for, so we need to start looking.’

‘We expect oceans to be important in regulating some of the most compelling remotely detectable signs of life on habitable worlds,’ said earth scientist Chris Reinhard, of the Georgia Institute of Technology, who was not involved in this study.

‘But our understanding of oceans beyond our solar system is currently very rudimentary,’ he added.

‘Dr Olson’s work represents a significant and exciting step forward in our understanding of exoplanet oceanography.’

The full findings of the study were presented at the 2019 Goldschmidt conference, which was held in Barcelona from August 18–23.

HOW DO SCIENTISTS STUDY THE ATMOSPHERE OF EXOPLANETS?

Distant stars and their orbiting planets often have conditions unlike anything we see in our atmosphere.

To understand these new world’s, and what they are made of, scientists need to be able to detect what their atmospheres consist of.

They often do this by using a telescope similar to Nasa’s Hubble Telescope.

These enormous satellites scan the sky and lock on to exoplanets that Nasa think may be of interest.

Here, the sensors on board perform different forms of analysis.

One of the most important and useful is called absorption spectroscopy.

This form of analysis measures the light that is coming out of a planet’s atmosphere.

Every gas absorbs a slightly different wavelength of light, and when this happens a black line appears on a complete spectrum.

These lines correspond to a very specific molecule, which indicates it’s presence on the planet.

They are often called Fraunhofer lines after the German astronomer and physicist that first discovered them in 1814.

By combining all the different wavelengths of lights, scientists can determine all the chemicals that make up the atmosphere of a planet.

The key is that what is missing, provides the clues to find out what is present.

It is vitally important that this is done by space telescopes, as the atmosphere of Earth would then interfere.

Absorption from chemicals in our atmosphere would skew the sample, which is why it is important to study the light before it has had chance to reach Earth.

This is often used to look for helium, sodium and even oxygen in alien atmospheres.