An Ebola vaccine has been approved by European drugs regulators in a move hailed as a ‘triumph for public health’.

The so-called Merck vaccine was given the green light this afternoon and is likely to get a full marketing licence from the European Commission within a few weeks.

It is already being used under emergency guidelines to try to halt the deadly outbreak currently ravaging the Democratic Republic of Congo.

The vaccine, developed by US drugmaker Merck and Co, has been given to more than 237,000 in the Congo.

In trials, it’s been proven to be 97 per cent effective at protecting against the rapidly spreading virus, which is fatal in half of cases. 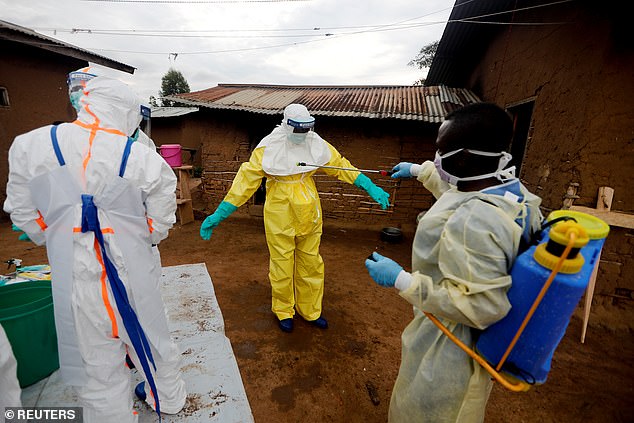 The vaccine has already saved lives in the Democratic Republic of Congo where Ebola has killed more than 2,157 people. Pictured, a healthcare worker in Beni, DRC 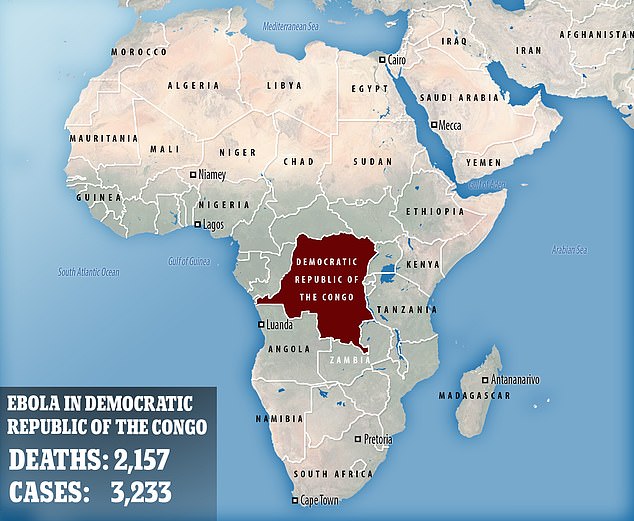 The DRC is battling the second largest Ebola outbreak in history, after a 2013-16 epidemic in West Africa that killed more than 11,300.

It is now also being reviewed under a fast-track system by regulators in America.

The World Health Organization (WHO) said the advancement was a ‘triumph for public health’ that would save many lives.

WHAT IS THE MERCK VACCINE?

It’s been more than 97 per cent effective, according to a preliminary estimate published by WHO.

Data release by WHO in April 2019  — the first to be released on how the vaccine is working in the outbreak — suggest a ‘very impressive’ performance.

Only 71 out of 90,000 at-risk people who were vaccinated went on to develop Ebola.

During the same time period, 880 cases occurred among at-risk individuals who had not received a jab.

A total of 56 of those people developed symptoms fewer than 10 days after being vaccinated, suggesting the vaccine had not yet had time to fully protect them.

It is believed it takes about 10 days for immune protection to develop after vaccination.

It was created by scientists at the National Microbiology Laboratory in Winnipeg, Manitoba, Canada, which is part of the Public Health Agency of Canada (PHAC).

‘This vaccine has already saved many lives in the current Ebola outbreak, and the decision by European regulator will help it to eventually save many more,’ the WHO’s director-general Tedros Adhanom Ghebreyesus said in a statement.

The Congo Ebola outbreak has killed more than 2,157 people since the middle of last year.

It is the second largest Ebola outbreak in history, after a 2013-16 epidemic in West Africa that killed more than 11,300.

The Merck vaccine, which the company has now brand-named Ervebo, is likely to get a full marketing licence from the European Commission within a few weeks.

Until now it has been called the rVSV-ZEBOV vaccine, and began being administered when the outbreak began last August.

It was chosen because, in 2015, it was proven to be safe and effective in a study of more than 16,000 people in Africa, Europe and the US.

The jab protects against the Zaire strain of the Ebola virus – the one that most commonly causes outbreaks.

A ‘ring vaccination’ approach traces people who may have been in contact with someone newly infected with Ebola.

Merck said in a statement its priority now was to get regulatory approval of its Ervebo manufacturing site in Germany so that licensed supply of the vaccine ‘can be used to support global public health preparedness.’ 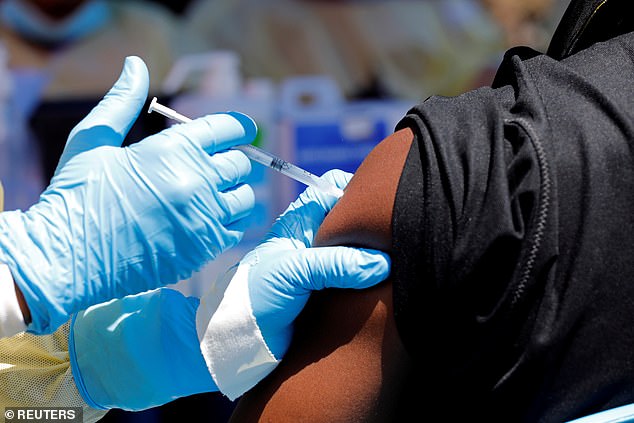 The vaccine, made by Merck, has already saved many lives in the current Ebola outbreak 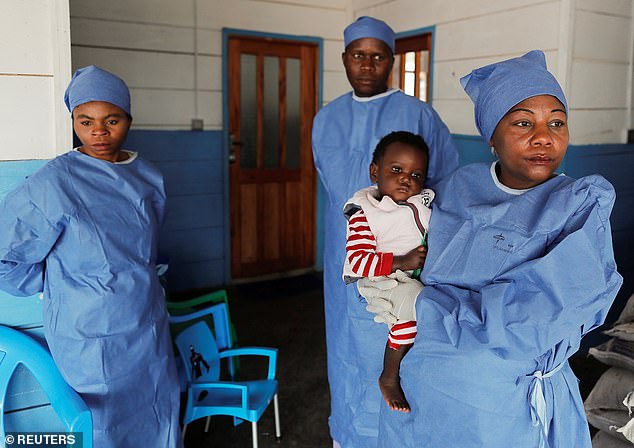 In trials, the Merck-vaccine has been proven to be 97 per cent effective at protecting against the rapidly spreading virus, which is fatal in half of cases 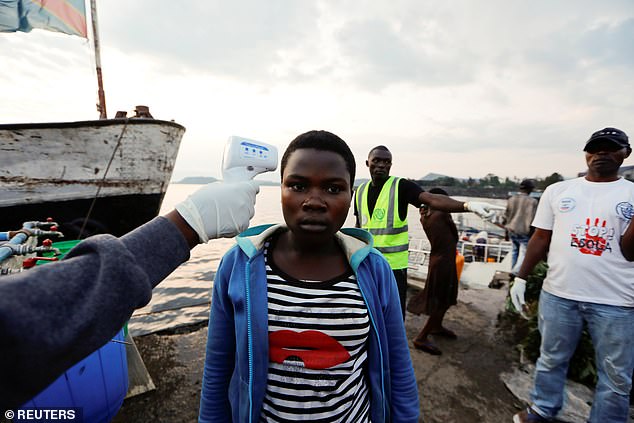 A second experimental second Ebola vaccine will be administered from the beginning of the month. Pictured, a health worker checks the temperature of a citizen at a crossing point

The shot is also being reviewed under a fast-track system by regulators in the United States, with a decision expected in the first quarter of next year.

Last month, the World Health Organization (WHO) came under fire for restricting supplies of the shot to a fraction of the population.

The aid group Doctors Without Borders, also known by its French acronym, MSF, slammed there had been ‘largely insufficient’ vaccination rates.

A second experimental second Ebola vaccine, developed by drugmaker Johnson & Johnson, is planned to be introduced in the Congo.

The J&J vaccine had been rejected by DRC’s former health minister Oly Ilunga, who cited the risks of introducing a new product in communities where mistrust of Ebola responders is already high.

The new Ad26-ZEBOV-GP vaccine will arrive in the eastern city of Goma, in North Kivu province, on October 18 and be used from the beginning of November.

Ebola virus causes haemorrhagic fever and spreads from person to person through direct contact with body fluids. It kills around half of those it infects.

There are currently no licensed treatments for the deadly infection, but scientists said in August they were a step closer to being able to cure it.

Two experimental drugs showed survival rates of as much as 90 per cent in a clinical trial in Congo.

WHAT IS EBOLA AND HOW DEADLY IS IT?

Ebola, a haemorrhagic fever, killed at least 11,000 across the world after it decimated West Africa and spread rapidly over the space of two years.

That epidemic was officially declared over back in January 2016, when Liberia was announced to be Ebola-free by the WHO.

The country, rocked by back-to-back civil wars that ended in 2003, was hit the hardest by the fever, with 40 per cent of the deaths having occurred there.

Sierra Leone reported the highest number of Ebola cases, with nearly of all those infected having been residents of the nation.

WHERE DID IT BEGIN?

An analysis, published in the New England Journal of Medicine, found the outbreak began in Guinea – which neighbours Liberia and Sierra Leone.

A team of international researchers were able to trace the epidemic back to a two-year-old boy in Meliandou – about 400 miles (650km) from the capital, Conakry.

Emile Ouamouno, known more commonly as Patient Zero, may have contracted the deadly virus by playing with bats in a hollow tree, a study suggested.

HOW MANY PEOPLE WERE STRUCK DOWN?

Figures show nearly 29,000 people were infected from Ebola – meaning the virus killed around 40 per cent of those it struck.

Cases and deaths were also reported in Nigeria, Mali and the US – but on a much smaller scale, with 15 fatalities between the three nations.

Health officials in Guinea reported a mysterious bug in the south-eastern regions of the country before the WHO confirmed it was Ebola.

Ebola was first identified by scientists in 1976, but the most recent outbreak dwarfed all other ones recorded in history, figures show.

HOW DID HUMANS CONTRACT THE VIRUS?

Scientists believe Ebola is most often passed to humans by fruit bats, but antelope, porcupines, gorillas and chimpanzees could also be to blame.

It can be transmitted between humans through blood, secretions and other bodily fluids of people – and surfaces – that have been infected.

IS THERE A TREATMENT?

The WHO warns that there is ‘no proven treatment’ for Ebola – but dozens of drugs and jabs are being tested in case of a similarly devastating outbreak.

Hope exists though, after an experimental vaccine, called rVSV-ZEBOV, protected nearly 6,000 people. The results were published in The Lancet journal.

Nearly 500 people in 15 states have contracted ‘explosive diarrhea’ from...