A mother was left in agony for five years, suffering seizures and barely able to walk, after having a contraceptive implant fitted.

Amy Speers, 34, from County Down, Bangor, Northern Ireland, was 28 when she felt her family of four children with husband Chris, 42, was complete and decided to have an Essure sterilisation implant.

However the procedure, which was carried out in January 2014, instantly left Amy in chronic agony, despite being told she could have the implant – a flexible coil inserted into the fallopian tubes – inserted in her lunch break without any pain.

At one point in desperation, she begged A&E staff for a scalpel so that she could cut it out, when strong painkillers failed to do anything to ease her symptoms.

The stay-at-home mother, who also has cystic fibrosis, was finally put on an urgent list for a hysetercomy at Ulster hospital and had the procedure carried out in July this year.

Amy has now launched a campaign against Bayer Health Pharmaceuticals, who took over Essure back in 2004, to ensure that the discontinued coil is permanently banned so that it will never resurface again.

Amy Speers, 34, from County Down, Bangor, Northern Ireland,  was left in agony after having an Essure sterilisation implant in 2014 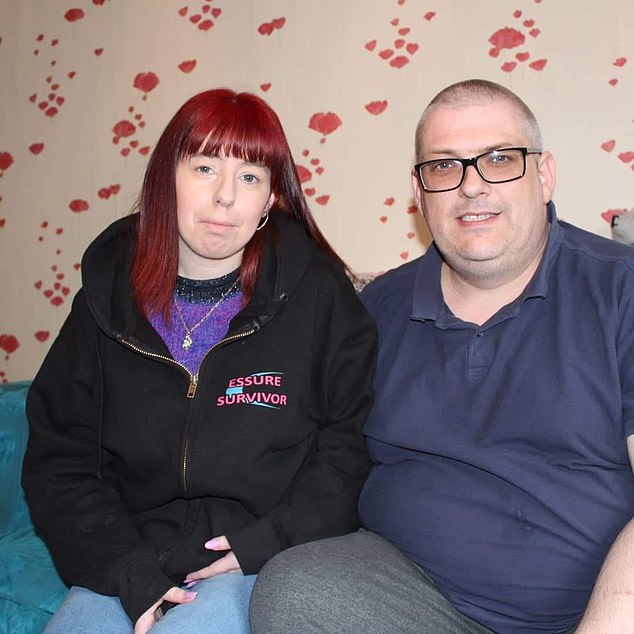 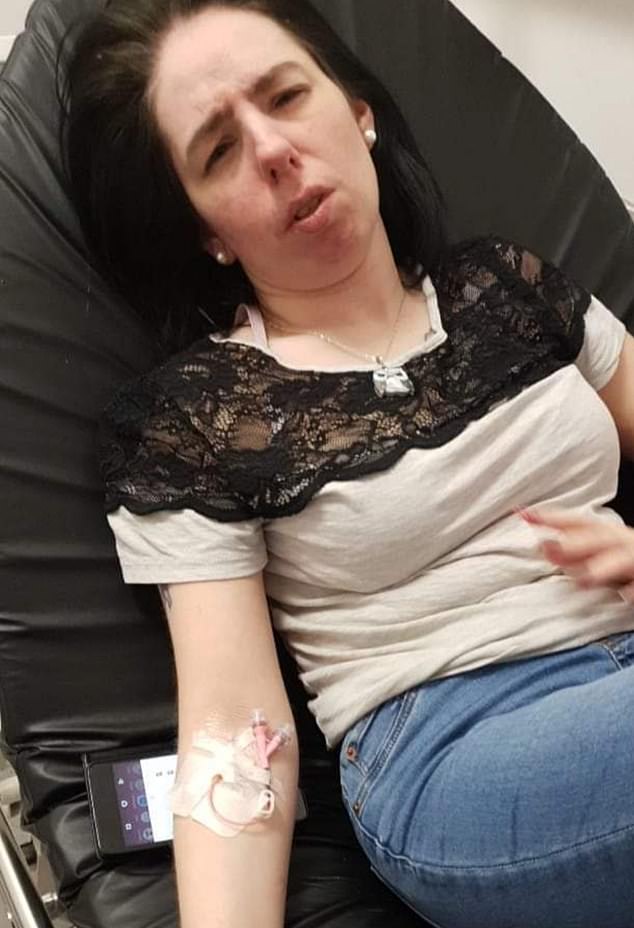 She said: ‘It was awful I knew I had to go through with it but I couldn’t hold out any longer.

‘I was in chronic pain I couldn’t even walk and I was having to call an ambulance out to my house every night every other night.

‘It was bizarre just because the pain was overriding my pain medication. I was on Tramadol at the start then moved to a very strong painkiller called tapentadol, paracetamol, co-codamol and even morphine. They couldn’t do anything for me.

‘I actually had to end up going to the human right commission here in Northern Ireland just to get something done.’

In July this year, after more than five years of chronic pain, Amy underwent a hysterectomy at Ulster hospital (pictured)

Prior to the hysterectomy, Amy, was left in agonising pain in the aftermath of her procedure and was in and out of hospital with seizures.

She continued: ‘I was in chronic pain for five years leading up to that and I was in and out of hospital with seizures and chronic pain in the pelvic area and just really really sore.

‘I was sore, I was getting cramps. I walked out and honestly it was awful I was walking like a duck. I got home and had to go straight to bed. I couldn’t fix the pain.

‘We left it a few weeks and got to the doctor because we were told you might have a few pains but my pains got worse and worse so I phoned the doctor.

‘I was in the gym a couple of days after the procedure and I collapsed in the gym.  I thought it was low blood sugar or just that I’d overdone it in the gym but we did not know at the time that it was Essure that caused this and it got so bad that I couldn’t move off the sofa.

Prior to having the implant fitted, Amy said she was unaware of what the consequences might be, and said the pain eventually became so severe that she pleaded with her husband to take it out.

She continued: ‘I’ve actually begged him and the A&E staff for a scalpel and a Stanley blade to take it out of me.

‘I wasn’t aware of anything. All I was told – and it actually makes me feel sick even today – was that it was so easy you could have this done in your lunch break, pain-free.

‘That’s what I was told and when I was having the procedure done it wasn’t pain free and I was absolutely in agony.’

She said: ‘The error lies with Bayer Health Centre because they knew what the complications were.

‘They knew what this was causing to a woman like myself and they let it be on the market, and then obviously now they just take it off saying it was the reduction in sales. But everybody knows it wasn’t a reduce in sales and it was because it was causing this significant pain in patients. 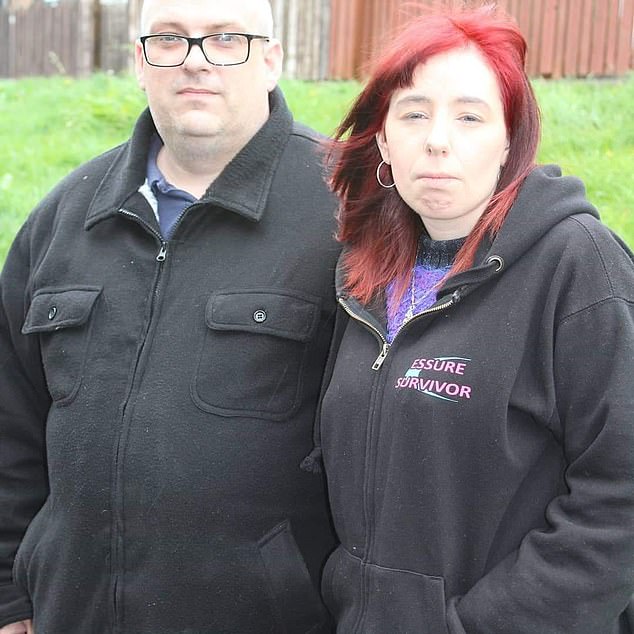 Prior to having the implant removed, Amy said the pain would be unbearable and she once asked Chris (left) to take it out 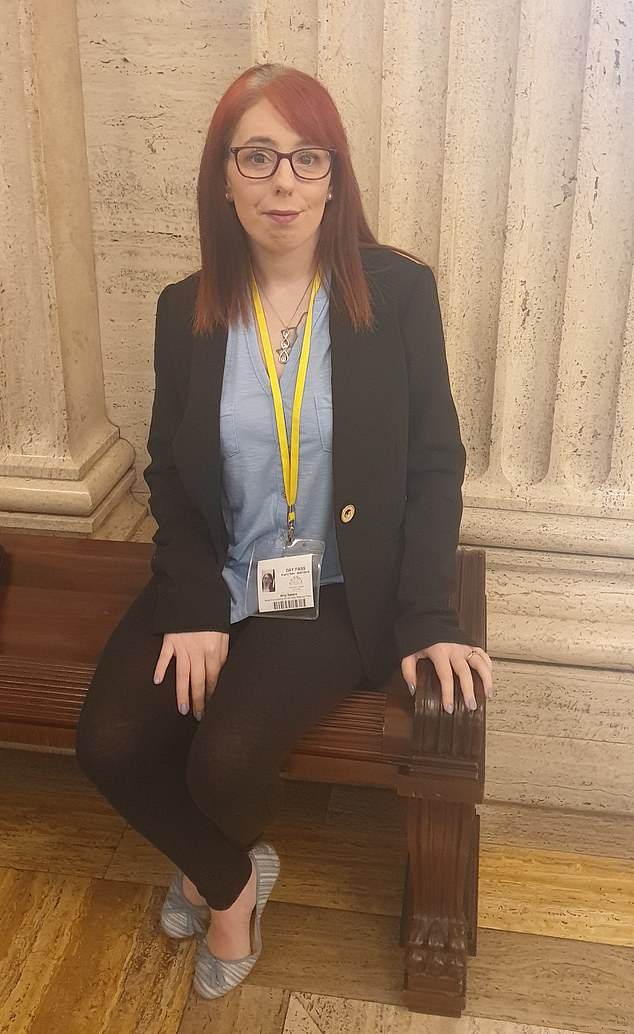 The determined mother has now launched a campaign against Bayer Health Pharmaceuticals, and hopes to never see the coil surface onto the market again

‘The stuff that is in the coil is aluminium and cooper and it’s awful what’s in that coil. It’s like the mesh story and that’s what we’re having to deal with.

‘It’s not just me, there are a lot of girls from America or Canada and a lot of girls in Northern Ireland who are having the same problems with Essure.

‘Nobody has apologised to me. Not one and I’ve asked for an apology.

‘It’s horrifying because with the coil you cant pull it out you have to take the whole tube out or have hysterectomy. If you pull them out there are fragments lieft and it can cause more damage. There are people I know who have perforated other organs.’

What is an Essure implant?

-The coil is a permanent implanted birth control device for women

The Essure coil, which was approved by the FDA in 2002, is a permanent birth control procedure that involves a soft flexible coil being placed in the fallopian tubes through the vagina and cervix.

Over the course of three months a barrier begins to form around the insert, which are made of materials that include polyester fibers, nickel, titanium, platinum, silver-tin and stainless steel and stops sperm from reaching the egg.

However in 2017, the coil was removed from the UK market by its manufacturer, Bayer Healthcare Pharmaceuticals, who said the decision was for commercial reasons.

Sales of the coil were later halted in America in 2018 by the U.S. Food and Drug Administration (FDA).

Now, Amy, who found support on the Facebook group Life After Essure UK and Ireland, has launched a campaign against Bayer and wants reassurance that the device will never make an appearance again.

She added: I want reassurance and for this not to happen again and let it be banned. It is banned in America and we need to have it completely banned in the UK. I can’t afford it being available for my own kids and watching all that unfold again. 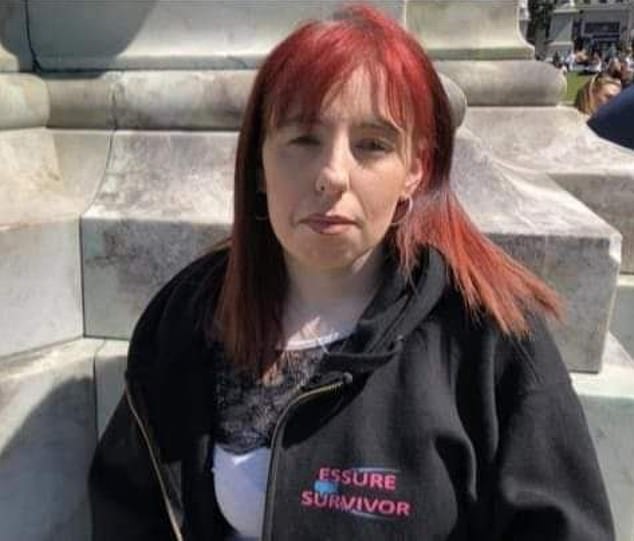 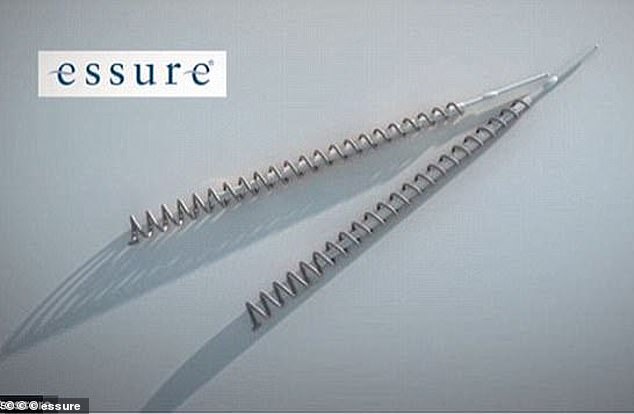 ‘Bayer can renew it again and therefore it will be back on the market but we can’t afford that to happen.’

‘ I also think hospitals need to be more aware of it. The Department Of Health need to realise what this has caused patients instead of just sweeping it under the carpet.’

A Bayer spokeswoman said: ‘Patient safety is the greatest priority at Bayer and we investigate reports of side effects of all our medicines or medical devices thoroughly. We stand behind the positive benefit risk profile of Essure, which continues to be supported by more than a decade of science and real world clinical experience.

‘Bayer would like to emphasise that recent independent expert reviews of Essure carried out by medical devices safety authorities have each addressed the safety of Essure in detail and have each concluded that Essure has a positive benefit / risk profile. The review by the US Food and Drug Administration (FDA) is available on the FDA’s website.

‘It is Bayer’s policy not to comment on pending or threatened litigation. Nevertheless, we would like to make clear that Bayer does not share the views or accept the claims expressed in the complaint.’

The South Eastern Health Trust said they do not comment on individual cases.

MailOnline has contacted the Department of Health for comment.

Nurse, 51, has both legs and her left arm amputated after...