A bonkers conspiracy that heralded rapper Eminem, 47, died years ago and is actually now a clone has been further fuelled with the release of an artist’s sensational Cloned Rapperssong.

The outrageous theory suggests that, in 2006, the Lose Yourself superstar died and was replaced by an android.

Among the supposed evidence that conspiracy theorists use is footage of Eminem “glitching” on a live ESPN report back in 2013.

It exploded once again in 2016 when rapper B.o.B posted a series of cryptic tweets claiming human cloning had been around for years.

And now, “conclusive proof” has emerged with the release of Tom MacDonald’s Cloned Rappers music video.

He claims in his song that the “Illuminati took bone samples to clone rappers” and then put the real beings in prison to “silence their vision”.

“If they can’t control you they erase the old you,” he continues, before listing some of the names that have been cloned. 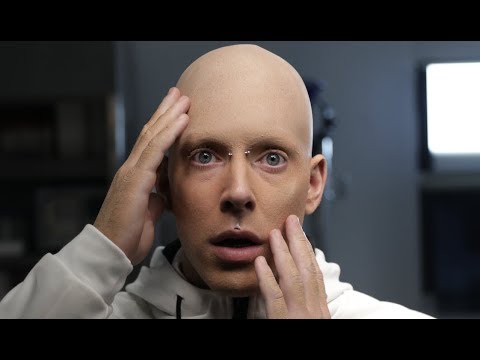 The setting of the music video looks like a scene straight out of Frankenstein – adding to the sense of “clones” being created in a lab.

The camera also cuts to showing newspaper cut-outs of Tom supposedly being in a car crash – hinting that he had been brought back to life as a clone just like the bizarre Eminem conspiracy.

More than 1million people have seen the video since it was posted to YouTube on September 27.

“He looks different plus he’s been gone too long especially before kill shot,” one commented.

Another said: “It’s true, Eminem is not the same.”

A third agreed, saying: “All this has been a move for a long time…I just hope the ignorant will finally understand.”

But some viewers had a different interpretation of the lyrics, suggesting it was, in fact, metaphorical for rappers now not being able to express themselves.

They claimed Tom was actually suggesting the music industry has forced them to conform to what sells money – cloning them.