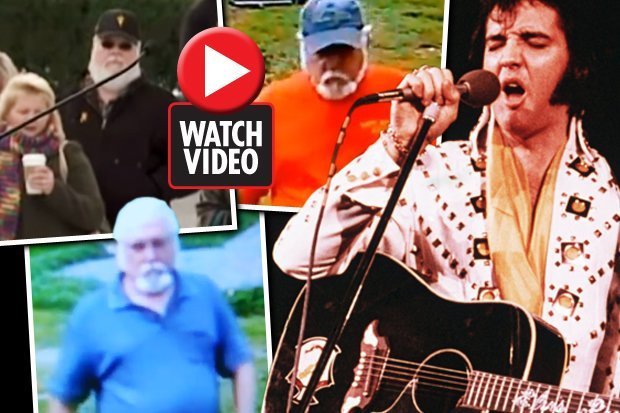 On January 16 1977, the King of Rock and Roll was found dead in the bathroom of his Graceland home aged 42.

While medical professionals credited the Hound Dog singer’s death to his relationship with prescription drugs, a series of sightings reported after the King’s passing led some to believe Mr Presley faked his own death in order to escape from the clutches of fame.

Of these sightings, three clips in particular have managed to stir conspirators into a frenzy, re-igniting long-standing claims Elvis may not have left the building after all.

In light of what would be the rock legend’s 84th birthday, here are the videos behind one of the largest conspiracy theories of all time.

On May 24 2016, conspiracy theorists were shocked to find a man – who looked suspiciously like Elvis – strolling across the green at Graceland mansion.

In the video, the man (who is wearing a blue polo shirt) stares at the camera briefly before tending to the garden.

The YouTube channel behind the strange video – known as “TheShadow” – is certain the man in the video is an 81-year-old Elvis Presley, caught visiting his former home.

THE KING? Theorists believe this man could be Elvis Presley (Pic: YOUTUBE/THESHADOW)

Speaking of the video, they said: “We confirmed with a few sources that used to work at Graceland that it’s [Elvis].

“As soon as they saw the images we sent, they wrote back and said it’s him, just as they remember him, with the exact same pony tail.

They continue: “One said he had gained weight, but to be fair Elvis loves food and always had a problem with gaining weight so this should not be a surprise.

Just one week later, the same man was spotted working in the garden of Elvis’ world-famous Graceland mansion.

In the footage a man – wearing an orange Elvis top and a blue hat – can be seen working with a hose in the garden, before pointing his two fingers at the camera.

However, TheShadow believes the man’s crude hand gesture may really be a hint of the King’s survival after all these years.

A SECRET MESSAGE? Some believed the man’s gesture was really a clue (Pic: YOUTUBE/THESHADOW)

On the topic, they explain: “In Chaldean Numerology the numerical value of V sign in Numerology is nine – proof of life.

“He is giving us a clue that he knows we are all there watching him and to his most loyal fans that he is indeed with us. “

Further, the YouTuber speculates Elvis was visiting the area in order to admire the motorcycles at a Harley Davidson rally, which comes to Memphis each year for a Elvis-themed photoshoot.

Elvis famously loved motorbikes, buying his first Harley Davison in 1956 after earning a regular income as a performing artist, and buying a series of fancier models as he rose to fame.

ELVIS IS DEAD? Elvis reportedly died at the age of 42 (Pic: GETTY)

However, a man later came forward claiming he was the man in the video – but conspiracy theorists weren’t buying it.

“That is not the same man,” one person remarked.

Another concluded: “Elvis is the groundsman that appears in Graceland.”

A third added: “This is very suspicious to me,” as the conspiracy continued to gain momentum online.

While hope of Elvis’ survival began to dwindle, fans spotted a familiar face in the background of nineties classic Home Alone.

In the clip, a man wearing a jacket and black turtle-neck jumper stands beside Kevin’s mum as she speaks to airport staff in hopes of returning home to her son Kevin (played by Macaulay Culkin).

And viewers were awestruck by the man, who looks remarkably similar to The King of Rock and Roll.

One person wrote: “If this isn’t Elvis, then you have to admit this guy looks like what you would expect him to look like in his mid 50s.”

Others weren’t convinced that someone would fake their death, only to appear as an extra in the background of a middle-of-the-road Christmas movie.

But before his reported death, Elvis appeared in at least 34 Hollywood Blockbusters, including Blue Hawaii and Jailhouse Rock.

And while no-one stepped forward as the actor in the film, the search for Elvis Presley continued online.

Last year, Elvis fans encountered the most compelling footage to date after a man was spotted visiting the singer’s Graceland estate on what would have been The King’s 82nd birthday.

In the video, a white-haired man can be seen standing behind a clear-glass podium at Graceland mansion.

He wears a pair of dark-tinted sunglasses as he looks around the estate, which is packed with adoring Elvis fans celebrating The King’s birthday.

HAPPY BIRTHDAY? A man was spotted in the crowd at Elvis’ birthday (Pic: YOUTUBE/INSIDEEDITION)

The video became a viral sensation on social media after gaining momentum on a Facebook page called “Elvis Presley is alive”.

One stunned viewer wrote: “I did notice that man at a few points during the video and wondered if it was him.

“I thought, he’s hiding in plain site again – the people next to him probably have no idea.”

Another added: “I knew it was Elvis straight away – so happy he got to spend his birthday celebration with his fans.”

42 year since the death of rock and roll, fans are still searching for evidence that Scouting For Girls were right after all: Elvis ain’t dead.

Some even believe The King left a message on his gravestone hinting at his survival – with others citing a long-lost audio tape as proof that Elvis’ death was a hoax.

After all these years, the “Elvis is alive” theory has maintained its status as one of the most famous conspiracy theories of all time, standing alongside the ranks of long-dead musicians such as Tupac, Biggie Smalls and Kurt Cobain.

Who knows? Maybe 2019 will be the year Elvis makes his grand return… but don’t hold your breath.