An eczema sufferer endures double takes from strangers after ditching her steroid creams left her with broken, flaking skin.

Laurie Williams, of Birmingham, always suffered from eczema on her arms and legs, but things took a turn for the worse in December 2016 when the condition spread to more than 70 per cent of her body, including her face.

While the 26-year-old once self-treated her flare-ups with E45 cream and a bit of sun exposure, she was soon relying on harsh steroid creams twice a day.

Although the lotions helped at first, Miss Williams was baffled as to why they became less effective over time.

After doing some online research, she decided to ditch the creams on January 20 and has been battling topical steroid withdrawal ever since.

The ordeal has left Miss Williams shaking, unable to stay warm and waking in the night sweating.

Laurie Williams endures double takes from strangers after ditching her steroid creams left her with broken, flaking skin (pictured left). Pictured right before her condition worsened, she used to be able to control her flare-ups with E45 cream and a bit of sun exposure 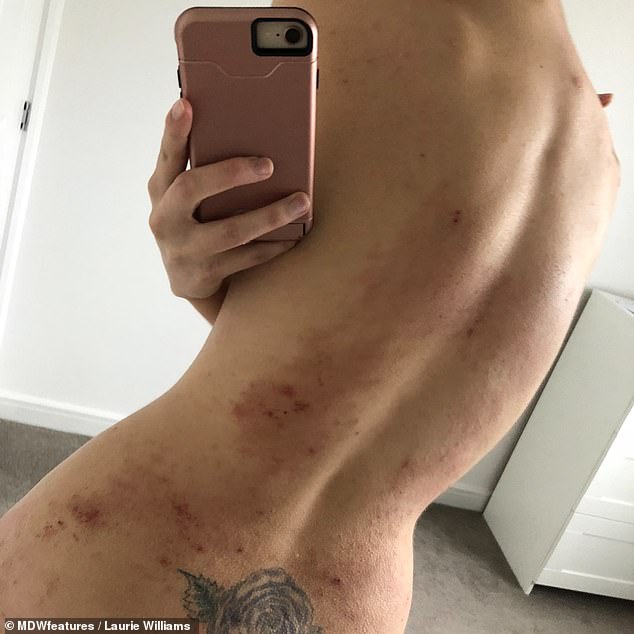 Speaking of her skin condition, Miss Williams said: ‘I’ve had eczema since I was little, but it’s always been manageable with flare ups mostly [being] in winter.

‘The furthest back I can remember is when I was about eight years old, and I just had it in the creases of my arms and legs.

‘When I was younger, I used E45 cream to successfully treat it.

‘The eczema went away quickly in the sun as my skin has always been best in the summer months.’

But at the end of 2016, Miss Williams was prescribed Eumovate for her face, neck, and the crases of her arms and legs.

She even started applying the steroid cream Elidel to her eyelids.

‘I also used Metosyn, the strongest steroid I used, on my trunk and limbs twice a day before reducing down to using Elocon upon improvement,’ Miss Williams said.

‘I would also use Betacap on my scalp as that got really flaky.

‘I found that with each steroid cream I used, it would work wonders in the beginning, then I would use it again with every flare and the creams became less effective over time.’

Miss Williams began to take matters into her own hands last summer.

‘At that point, I’d had eczema on my body for about two years, it had never fully gone away,’ she said.

‘I thought it was unusual that my eczema hadn’t cleared up in the lovely summer we had, so I began researching, [and] then came across TSW and the Instagram community.

‘I went back to the doctors four times over the next six weeks as I was concerned about using steroids and was given different plans each time, each continuing the use of steroids.

‘I decided to take matters into my own hands, and I stopped applying the steroids completely on January 20 2019.’

Years of scratching has left Miss Williams with scars but she still refuses to use steroid creams any time soon and is instead turning to alternative methods of healing.

‘I’ve stripped everything back to basics and I’ve been vegan since the new year, I have oat baths every two days and no longer slather my body with moisturiser,’ she said.

‘I am also taking daily vitamins, D3, zinc, selenium and acidophilus and drinking lots of juice.

Although Miss Williams is determined to stay positive, the effects of TSW have gotten to her.

‘My sleep was disrupted every night without doubt as I’d wake up and scratch for about 30 minutes, five times a night,’ she said.

‘I have never been a sweater, but I am sweating like mad through the night.

‘When I first came off steroids, I couldn’t get warm. I’d sit at work with a cup of tea, my coat on all day and a heater by me and I’d still be cold and shivering.

‘My skin was so broken, so it wasn’t retaining heat. I’d also feel weak and my legs would shake.’

As well as her symptoms, Miss Williams also has to endure the judgement of others.

‘People double take when they see me now, but that’s only natural, and some ask me what’s happened to my face and skin,’ she said.

‘I was a lot more self-conscious at the beginning than I am now, partly because my face is better and partly because I’m so used to looking the way I do.

‘However, there was one incident where I was travelling home on a train from London and it was my stop to get off.

‘I brushed down my clothes – as skin flakes fall off naturally – before I stood and shifted past the lady in the aisle seat.

‘I reached above her to grab my bags from the top luggage rack and some skin flakes fell on her.

‘She brushed them off politely, but I was mortified and rushed off the train as quick as I could.’

Miss Williams – who has become vegan in the hope it will speed up her healing – is speaking out to raise awareness of TSW.

‘There’s a huge support network for everyone going through it,’ she said.

‘It’s been great to hear people say they used to look like me because it means there’s hope and I can one day have skin like them.

‘I’ve learned that time is the biggest healer.

‘My strength is other people’s TSW success; it’s what keeps me going.’

More than one MILLION patients could face long waits in A&E...