Dynamo Kyiv 0-4 Barcelona: Visitors ease into last 16 of Champions League despite absence of Lionel Messi with Antoine Griezmann and Martin Braithwaite on target

By Pete Jenson for MailOnline

No Lionel Messi, no problem – Martin Braithwaite assisted one and scored two as Barcelona qualified for the Champions League knockout stages with a 4-0 win over Dynamo Kiev.

The former Middlesbrough and Leganes forward, who was a shock emergency signing last February for Barcelona after injuries to Ousmane Dembele and Luis Suarez has been given little game time by Ronald Koeman.

The departure of Suarez has left him as Barça’s only centre-forward but before the trip to Ukraine he had played just 44 minutes.

But making his Champions League debut with Griezmann starting on the bench and Messi watching from home in Barcelona he led an almost unrecognizable team to an easy victory.

Sergino Dest got the first becoming the first United States player to score for Barcelona with the goal on 52 minutes.

He surged forward and, playing off of first Pedri and then Braithwaite, he sent the ball across Kiev keeper Georgi Bushchan and into the far corner.

The 20-year-old full-back who signed from Ajax in the summer was only making his third start but he made history with the second half strike. 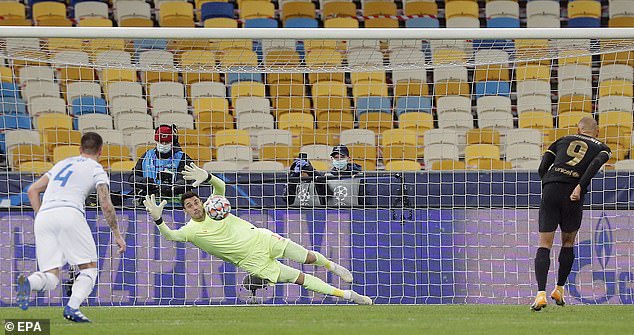 Braithwaite made it 2-0 by scoring from close range at the back post after Oscar Mingueza had flicked the ball on with a clever header. The 21-year-old B-team centre-back was in the team to replace the injured Gerard Pique and was impressive in the win.

Koeman had Braithwaite making his first start of the season up front with Francisco Trincao, Pedri and Philippe Coutinho playing behind him.

Griezmann was soon warming up after the restart because Barcelona had failed to get a shot on target in the first 45 minutes. Coutinho’s shot wide was their best effort.

There was little more from Dynamo Kiev. Carlos de Pena raced away and almost scored with the last kick of the first period but Marc-Andre ter Stegen saved well. 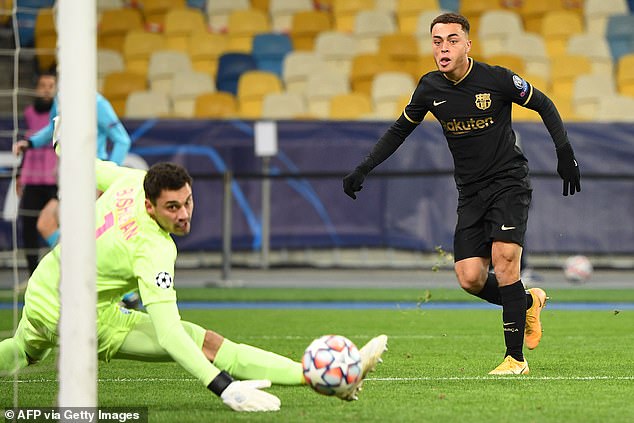 But as Greizmann cranked up the intensity of his warm-up in the second period Barcelona got their goals and the game was as good as won when on the hour the French forward came on with Jordi Alba and Riqui Puig.

Braithwaite got the third when, diving for a header, he was pushed in the back by Denys Popov. The Dane had no doubts that he wanted to take the spot kick and he put it in the corner past Bushchan.

Koeman made the most of such an easy win by giving Riqui Puig a Champions League debut and then giving first ever first-team starts in competitive games to Konrad de la Fuente and Matheus Fernandes. 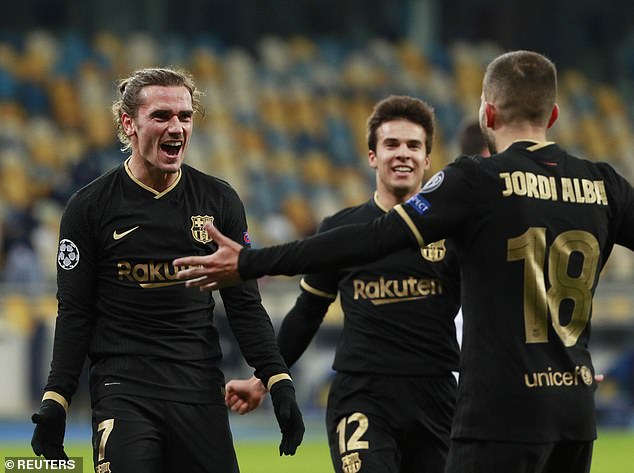 In injury time Griezmann scored the fourth after Carles Aleña and Jordi Alba had worked an opening down the left.

This was supposed to be a potential slip-up for Barcelona but Koeman can board the flight back to Spain satisfied that he has shown that his squad does have strength in depth and that the absence of Pique and the fatigue of Messi are not insurmountable problems for his team.

Barcelona are in the last-16 once more. Now to the league and remedying that 13th place in the table.