Never pay to park again! Autonomous cars will drive aimlessly around a city until their owners finish shopping instead of pulling up (but experts warn it could cause gridlock chaos)

Driverless cars will cruise around city centres while their owners shop instead of parking to avoid extortionate parking fees, according to new research.

The influx of the controversial vehicles meandering around the roads would likely increase congestion and cause huge traffic jams, scientists claim.

During this time they will also save petrol by going slow to ‘kill time’ – amplifying the issue.

Driverless cars will cruise around city centres while their owners shop instead of parking to avoid extortionate parking fees, according to new research. The influx of the controversial vehicles meandering around the roads would likely increase congestion and cause huge traffic jams, scientists claim (stock)

Adam Millard-Ball, an associate professor of environmental studies at the University of California, Santa Cruz, said: ‘Parking prices are what get people out of their cars and on to public transit.

‘But autonomous vehicles have no need to park at all. They can get around paying for parking by cruising. They will have every incentive to create havoc.’

Chancellor Philip Hammond expects ‘fully driverless cars’, with no safety attendant on board, to be in use in just two years – by 2021.

The study, published in the journal Transport Policy says the nightmare of ‘robot-fuelled gridlock’ is right around the corner.

Professor Millard-Ball says self driving, or autonomous, vehicles are likely to become commonplace in the next five to 20 years.

He carried out the first analysis of its kind into the combined impact of parking costs and the vehicles on city centres where the expense and availability of space restricts car travel.

It found, under the ‘best-case scenario,’ the presence of just 2,000 self-driving cars in downtown San Francisco will slow traffic to less than two miles per hour.

He said: ‘It just takes a minority to gum things up. Drivers would go as slowly as possibly so they wouldn’t have to drive around again.’

But cities will be hard-pressed to provide remote parking areas for driverless cars at rates lower than the cost of cruising.

Professor Millard-Ball estimates this at just 50 cents an hour – about 30p in English money. 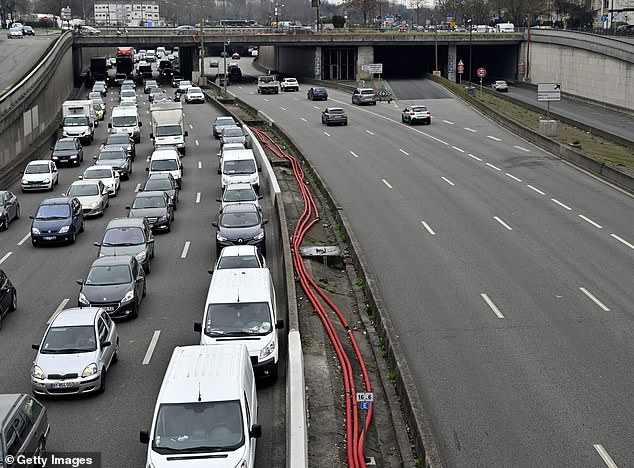 Chancellor Philip Hammond expects ‘fully driverless cars’, with no safety attendant on board, to be in use in just two years – by 2021. They may worsen congestion, a study has found

WHAT ARE THE SIX LEVELS OF SELF-DRIVING AUTOMATION?

Level Zero – The full-time performance by the human driver of all aspects of the dynamic driving task, even when enhanced by warning or intervention systems.

Level One – A small amount of control is accomplished by the system such as adaptive braking if a car gets too close.

Level Two – The system can control the speed and direction of the car allowing the driver to take their hands off temporarily, but they have to monitor the road at all times and be ready to take over.

Level Three – The driver does not have to monitor the system at all times in some specific cases like on high ways but must be ready to resume control if the system requests.

Level Four – The system can cope will all situations automatically within defined use but it may not be able to cope will all weather or road conditions. System will rely on high definition mapping.

Level Five – Full automation. System can cope with all weather, traffic and lighting conditions. It can go anywhere, at any time in any conditions.

Tesla’s Model 3 Sedan – one of the world’s most advanced road-legal cars with autonomous elements – currently operates at Level Two autonomy. It is equipped for Level Three autonomy, which may be introduced in a future software update

The solution, according to the researchers, lies in ‘congestion pricing’ to charge people for entering densely populated areas.

In London’s city centre, motorists pay a flat fee of £11.50 (about $15) to enter. Singapore and Stockholm employ similar models.

Professor Millard-Ball said: ‘Congestion pricing is difficult to implement. The public never wants to pay for something they have historically gotten for free.

‘But no one owns an autonomous vehicle now, so there is no constituency organised to oppose charging for the use of public streets.

‘This is the time to establish the principle and use it to avoid the nightmarish scenario of total gridlock.’

Lightning mostly strikes Florida and Texas in US

Efforts to suck carbon from air must be ramped up