In a little over a day the verified account has amassed 55,860 followers.

The channel has so far been used to broadcast Trump’s campaign rallies, including footage of his speech at a rally in Minnesota on October 10th.

This week Donald Trump launched a Twitch channel (pictured above) to broadcast 2020 campaign events and fundraise.

The channel’s home page has links to Trump’s merchandise store, as well as options for those who either want to donate or, volunteer for, his campaign.

A number of political figures have appeared on the service that was first popularized by video game players, including Cory Booker, Matt Gaetz, and Suzan DelBene.

The clips feature allows other Twitch users not officially connected to Trump to isolate their own small excerpts from the video and label them. 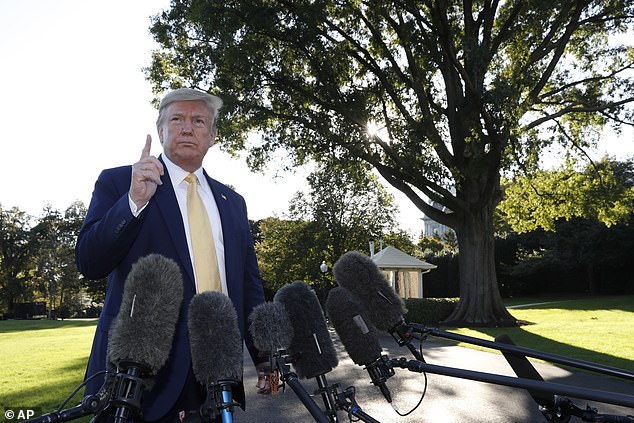 Donald Trump’s Twitch channel has drawn more than 55,000 followers in a little over a day.

The feature provides a look at his audience on the platform.

The channel has selected a number of short clips from the rally, including Trump telling a protester in the audience to ‘go home to mommy.’

Twitch is a platform that allows users to stream live video footage of themselves.

The service was launched as Justin.tv in 2007.

The site founders recognized the people were using the site to stream themselves playing video games more than any other activity, and so in 2011 they created Twitch as a  standalone brand that would focus on games.

An estimated 15 million people will watch streams on Twitch every day.

Another clip is labelled ‘KEK,’ a term the Southern Poverty Law Center says is commonly used by white nationalists as a reference to a fictional god of chaos.

One clip is labelled ‘pepelaugh,’ another reference to Pepe the Frog, another once popular figure in white nationalist troll lore.

Trump has been an outspoken critic of Jeff Bezos, who bought Twitch in 2014 for an estimated $970 million.

‘If I become president, oh do they have problems,they’re going to have such problems.’ Trump said of Amazon and Bezos in 2016.

Twitch has been the center of a number of controversies in recent years.

Earlier this week, an active shooter at a German synagogue broadcast his killing spree over Twitch.

Over the summer, a woman’s stream was shutdown for breastfeeding her child.

World’s permafrost gets warmer; Siberia rises the most