Supporters of a builder who complained he had not been paid his £600 wages before driving a 2.5-ton digger into a Travelodge have raised £5,000 on a GoFundMe.

The driver, known has John, drove into the reception area of the hotel at Liverpool Innovation Park on Edge Lane shortly before 3pm Monday.

He claimed his wages had not been deposited into his account on Friday, however co-workers alleged there had been a glitch and the money did not arrive until Monday morning. 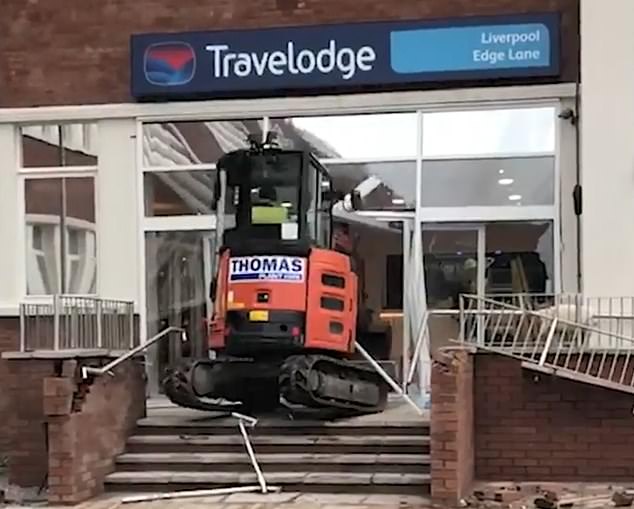 The digger smashes into the Travelodge hotel in Liverpool, breaking the front doors

One worker at the site told The Sun: ‘The money was supposed to go into his bank on Friday.

‘But there was some kind of glitch and it didn’t go in until Monday.

‘He didn’t check his bank account and didn’t realise he’d actually been paid. That’s why he went mental and wrecked the place.’

Merseyside Police said they had located the man and will interview him as part of their investigation. ‘Detectives investigating an incident yesterday (Monday 21 January) at a hotel under construction in Liverpool have located a man who will be interviewed.

‘A report was received shortly before 3pm that a digger was being driven into the entrance of the Travelodge building in the Liverpool Innovation Park.

‘The driver then left the vehicle and made off on foot in the direction of Edge Lane.

‘A man has since been located and will be interviewed as part of the ongoing investigation.’

After getting up the steps leading to the entrance, the digger tears through the entrance and white parts of the doorway can be seen falling to the ground.

A few seconds later, the digger rolls back out of the entrance and down the steps but the determined operator heads back up and through the front door. 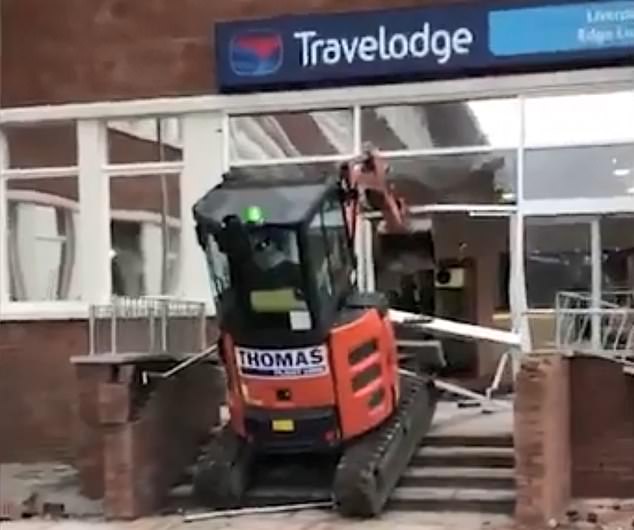 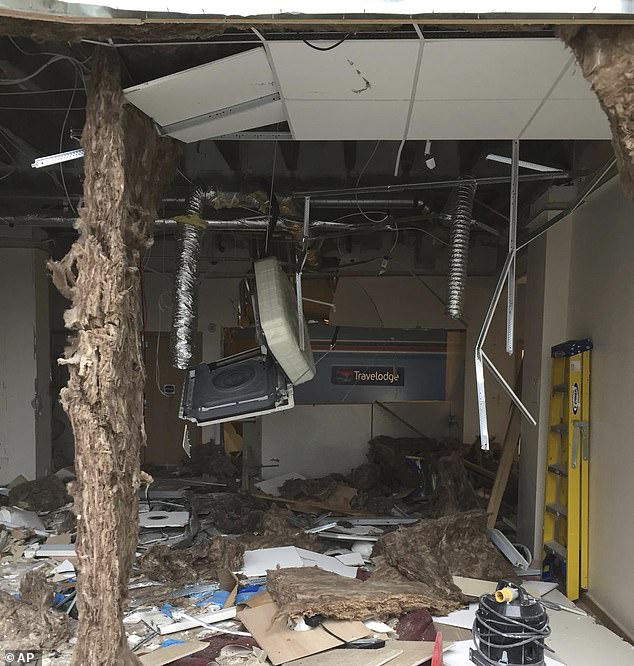 The destroyed reception of the Travelodge on Edge Lane, Liverpool, pictured yesterday

The arm of the digger is well inside the reception and the driver, who works for MF Constructions, proceeds to crash into walls and the front desk.

A number of workers can be seen cheering on the driver while videoing the incident on their phones – with others appearing to try to stop him.

One person can be heard shouting on the footage, saying: ‘That’s what happens when people don’t pay your wages, mate.

‘You just don’t s**t on the job. He’s a sick man, mate. Right through the building.’

On the Travelodge website, the hotel is listed as ‘opening soon’, but the extensive damage could set back their plans.

The driver of the digger was angry over a pay dispute said to involve £600, according to claims made on social media. 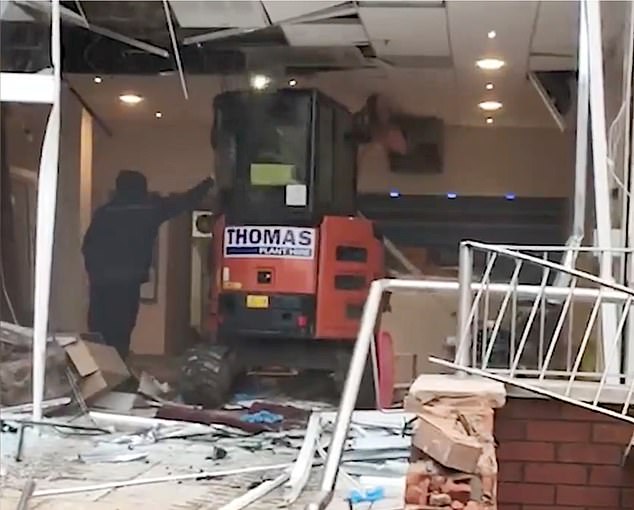 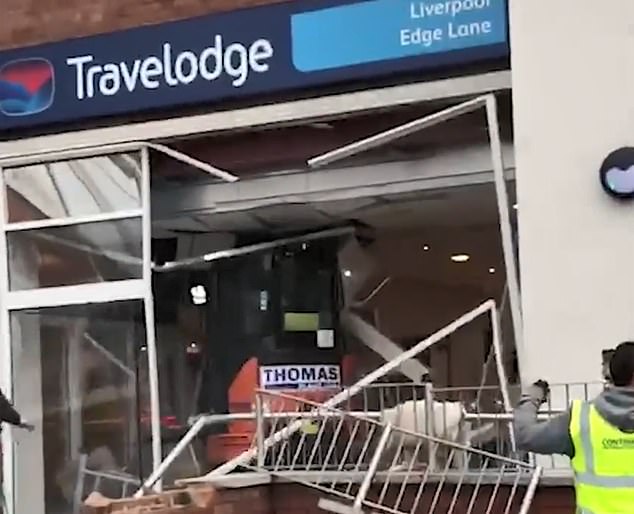 Police were called to the scene but the digger driver had already left the vehicle and ran from the area, towards Edge Lane.

In a statement, the force said: ‘We are appealing for information after damage was caused to a hotel under construction in Liverpool.

‘A report was received shortly before 3pm that the digger was being driven into the entrance of the Travelodge building in the Liverpool Innovation Park.

‘The driver then left the vehicle and made off on foot in the direction of Edge Lane.

‘One man experienced eye irritation due to exposure to diesel and was treated at the scene by North West Ambulance Service.

‘It is not believed anyone else was injured during the incident.

‘Merseyside Fire and Rescue Services and contractors attended to ensure the site was safe.’

Pictures taken at the Travelodge show extensive damage caused to the building, including broken glass and fallen debris, with the digger still outside the hotel.

Workers had erected metal fencing at the scene, around the destroyed hotel front, while officers carried out enquiries at the hotel.

Thousands of people have now seen the footage on social media, with saying he was right to take drastic actions if he hasn’t been paid. 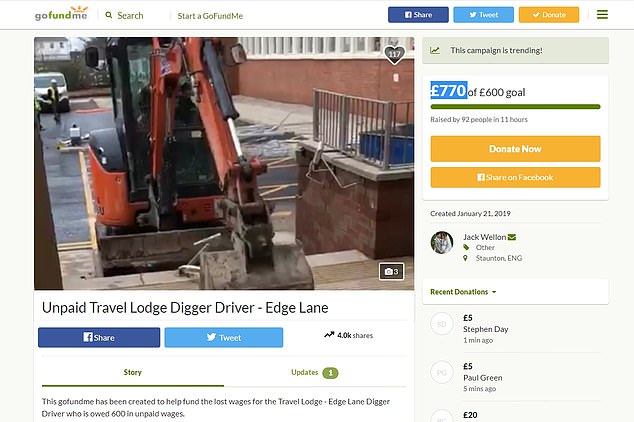 A GoFundMe page to cover the driver’s ‘lost wages’ – and apparently also his legal bills – has now hit £760, with some online commenters hailing him as a ‘legend’ 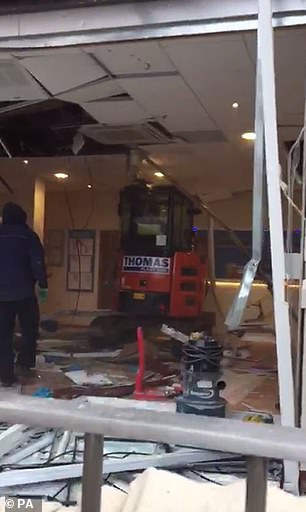 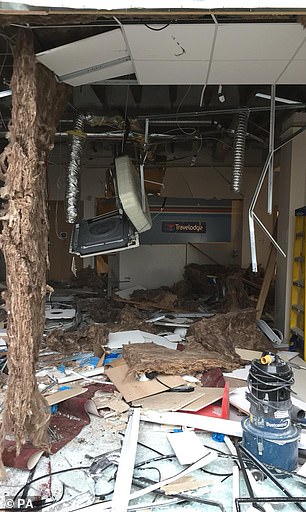 Some of the ceiling panels are ripped off during the incident, left and pictures of the damage, right, show the extent of the damage

Another said: ‘Can’t not pay people happens to much in construction. The man probably had bills to pay children to support. If you do the work you should be paid on agreed day end of.’

Adam Hughes wrote: ‘Pay a man his wages so he can put food on the table and he won’t put a digger through a building, pretty simple business model isn’t it.’ 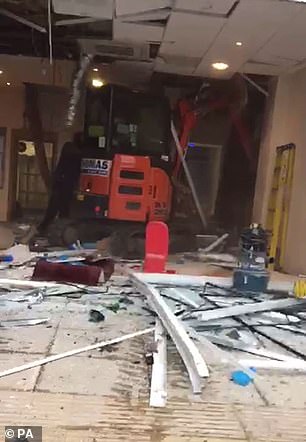 Karen Johnstone commented: ‘100% respect for this guy. He obviously was pushed to the brink to act this way.

‘Shocking how the big companies fail to pay wages to the contractors. I know good, hardworking, honest men have lost their companies, livelihood, employees livelihoods, homes through big companies not paying them for completed jobs. No care at all!!!! Shame on you all!!!!’

Amanda Rhodes said: ‘My heart goes out to him, that he felt this was the only way left to make a stand doing something that drastic knowing he might have huge consequences. Shame on those who haven’t paid the workers.’

In another video taken from inside the hotel building the scale of the damage caused by the digger can be clearly seen.

Parts of the ceilings are collapsed around the machinery, while walls and structural beams also appear to be affected by the vehicle.

A number of other workers in high-vis jackets can be seen inside the hotel watching the carnage.

One man even walks over to the digger and tries to reason with the driver.

He grabs onto the vehicle and another man, who has walked to a safe distance away from the reception, shouts: ‘You’re going to break your leg!’ 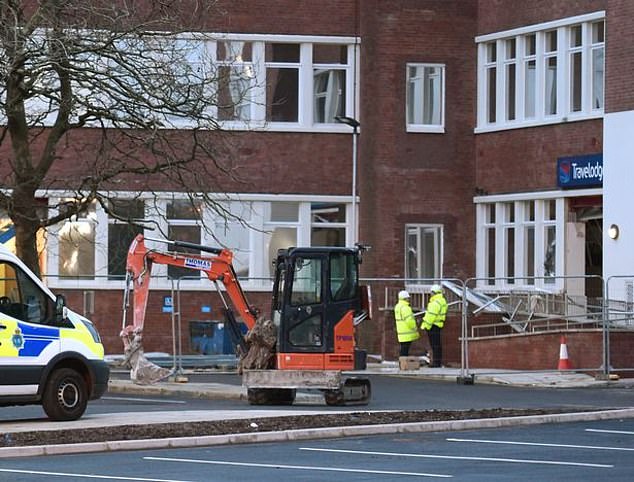 Travelodge declined to comment as the police investigation is ongoing.

A spokesperson for Triton Construction, the main constructor on site, said there understanding is that a labourer who works for another groundwork constructor couldn’t find his boss who was due to give him his wages.

They said: ‘At approximately 3.00pm the labourer took it upon himself to drive a small mini excavator through the entrance screen of the hotel and subsequently caused damage to finishes within the reception.

‘Fortunately there appear to be no structural damage so repairs can be undertaken relatively quickly.’

Sorry we are not currently accepting comments on this article.

The Koenigsegg Jesko is the world’s first 300MPH road car