Destroying life-ending asteroids headed for Earth will be tougher than we thought: Space rocks are stronger and harder to blow apart than previously believed, computer simulations suggest

Apocalyptic asteroids heading for Earth may be harder to destroy than the Hollywood sci-fi films would have us believe.

Scientists studying just how easy it would be to blow up a life-threatening space rock found they are stronger and more resilient than previously imagined.

They say the discovery could aid in the creation of asteroid deflection weapons and for designing efficient asteroid mining techniques.

Researchers found the fallout from the enormous collision would be split into two different stages. This image shows frame-by-frame how gravity causes asteroid fragments to re-accumulate in the hours following impact

‘We used to believe that the larger the object, the more easily it would break, because bigger objects are more likely to have flaws,’ says Charles El Mir, a recent PhD graduate from Johns Hopkins University, who led the study.

‘Our findings, however, show that asteroids are stronger than we used to think and require more energy to be completely shattered.’

A rock’s strength and its physical properties are known on the small-scale but researchers have had difficulty scaling up the research for asteroids capable of wiping out humankind.

The research, due to be published in the journal Icarus later this week, analysed a specific scenario.

It looked to find out what would happen if an asteroid about a kilometre in diameter collided head-on with another space rock measuring 15 miles (25 km) across and was travelling at an impact velocity of 0.6 miles per second (five kilometres) per second.

Previous studies found this would completely obliterate the asteroid but Dr El Mir and his team added extra information to the test.

They discovered previous research had neglected to include the limited speed of cracks in the asteroids. 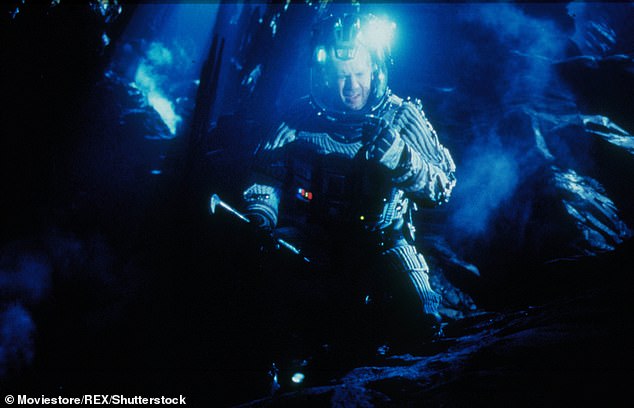 Asteroids heading for Earth feature heavily in the plot of Hollywood Sci-fi films, such as the Bruce Willis 1998 blockbuster Armageddon (pictured), but scientists say they may be harder to destroy than the movies would have us believe (file photo)

‘Our question was, how much energy does it take to actually destroy an asteroid and break it into pieces?’ says Dr El Mir.

They found the fallout from the enormous collision would be split into two different stages.

The first would see millions of cracks form and ripple throughout the asteroid and there would be significant damage to the core.

But the entire rock would not be fragmented and it would remain largely intact.

The largely surviving rock would then exert significant amounts of gravity on the discarded remnants from the collision and eventually pull them back in.

WHAT ARE THE DIFFERENT TYPES OF SPACE ROCKS?

An asteroid is a large chunk of rock left over from collisions or the early solar system. Most are located between Mars and Jupiter in the Main Belt.

A comet is a rock covered in ice, methane and other compounds. Their orbits take them much further out of the solar system.

A meteor is what astronomers call a flash of light in the atmosphere when debris burns up.

This debris itself is known as a meteoroid. Most are so small they are vapourised in the atmosphere.

If any of this meteoroid makes it to Earth, it is called a meteorite.

Meteors, meteoroids and meteorites normally originate from asteroids and comets.

For example, if Earth passes through the tail of a comet, much of the debris burns up in the atmosphere, forming a meteor shower.

Patterns and understanding how the damaged core would be covered up by the second stage would allow future space miners to more accurately target a specific region of the asteroid.

‘It may sound like science fiction but a great deal of research considers asteroid collisions,’ Dr El Mir said.

‘For example, if there’s an asteroid coming at earth, are we better off breaking it into small pieces, or nudging it to go a different direction? And if the latter, how much force should we hit it with to move it away without causing it to break? These are actual questions under consideration.

‘We are impacted fairly often by small asteroids, such as in the Chelyabinsk event a few years ago,’ added K. T Ramesh, director of the Hopkins Extreme Materials Institute.

‘It is only a matter of time before these questions go from being academic to defining our response to a major threat. We need to have a good idea of what we should do when that time comes—and scientific efforts like this one are critical to help us make those decisions.’

WHY DO SCIENTISTS WANT TO MINE ASTEROIDS?

Several start-ups have begun to explore the idea of mining near-Earth asteroids for precious resources.

The celestial objects are made of carbon, silicon or metal, but it is metallic asteroids that mining companies are most interested in.

These rogue blocks of minerals are teeming with precious metals, including pricey platinum, which could be worth quadrillions on Earth.

Nickel, iron and gold are also found in abundance within metallic asteroids.

Nasa estimates the total value of resources locked in space rocks is £522 quintillion – equivalent to £75 billion ($100 billion) for each person on Earth.

A company could send a small space probe to intersect with asteroids as they pass near Earth, and mine them for these resources.

Experts have warned that doing so may destroy commodity prices and cause the world’s economy to collapse.

Fossil reveals how ancient reptiles had limbs and cheekbones for 100million...