Mice with dementia had their memories restored after receiving an injection to suppress a certain enzyme, a new study reveals.

Researchers say the finding could have groundbreaking implications for humans, potentially making it possible to reverse memory loss, a hallmark of the disease in its late stages.

The findings, published in the journal Brain, suggest that by focusing on gene changes caused by influences other than DNA sequences – epigenetics – it was possible to reverse memory decline in an animal model of Alzheimer’s. 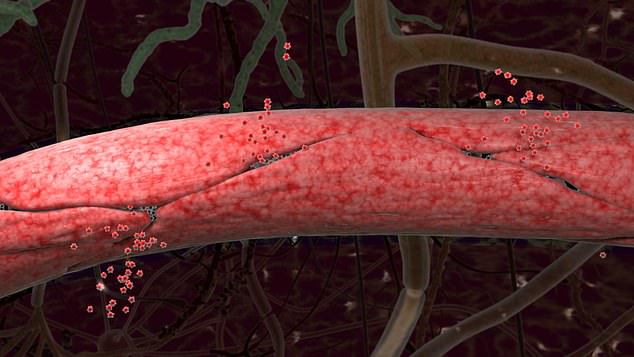 Alzheimer’s results from both genetic and environmental risk factors, such as aging, which combine to result in epigenetic changes, leading to gene expression changes, but little is known about how that occurs. This new study offers some possible answers

Senior author Professor Zhen Yan, of University at Buffalo, said: ‘In this paper, we have not only identified the epigenetic factors that contribute to the memory loss, we also found ways to temporarily reverse them in an animal model of Alzheimer’s Disease.’

The research was conducted on mouse models carrying gene mutations for familial Alzheimer’s – where more than one member of a family has the disease – and on post-mortem brain tissues from Alzheimer’s patients.

Alzheimer’s results from both genetic and environmental risk factors, such as aging, which combine to result in epigenetic changes, leading to gene expression changes, but little is known about how that occurs.

Dr Yan said the epigenetic changes in Alzheimer’s happen primarily in the later stages, when patients are unable to retain recently learned information and exhibit the most dramatic cognitive decline.

She said a key reason for the cognitive decline is the loss of glutamate receptors, which are critical to learning and short-term memory.

Dr Yan said: ‘We found that in Alzheimer’s disease, many subunits of glutamate receptors in the frontal cortex are downregulated, disrupting the excitatory signals, which impairs working memory.’

The researchers found that the loss of glutamate receptors is the result of an epigenetic process known as repressive histone modification, which is elevated in Alzheimer’s.

They saw this both in the animal models they studied and in post-mortem tissue of Alzheimer’s patients.

Dr Yan explained that histone modifiers change the structure of chromatin, which controls how genetic material gains access to a cell’s transcriptional machinery.

She said: ‘This Alzheimer’s-linked abnormal histone modification is what represses gene expression, diminishing glutamate receptors, which leads to loss of synaptic function and memory deficits.’

Understanding that process has revealed potential drug targets, she said, since repressive histone modification is controlled or catalyzed by enzymes.

Dr Yan said: ‘Our study not only reveals the correlation between epigenetic changes and Alzheimer’s, we also found we can correct the cognitive dysfunction by targeting the epigenetic enzymes to restore glutamate receptors.’

The rodents with Alzheimer’s were injected three times with compounds designed to inhibit the enzyme that controls repressive histone modification.

They saw a ‘dramatic’ shift in the rodents’ memory.

‘We were quite surprised to see such dramatic cognitive improvement.

‘At the same time, we saw the recovery of glutamate receptor expression and function in the frontal cortex.’

The improvements lasted for a week, but future studies will focus on developing compounds that penetrate the brain more effectively and are thus longer-lasting.

Dr Yan explained that brain disorders, such as Alzheimer’s, are often polygenetic diseases, where many genes are involved and each gene has a modest impact.

She said an epigenetic approach is advantageous, because epigenetic processes control not just one gene but many genes.

She added: ‘An epigenetic approach can correct a network of genes, which will collectively restore cells to their normal state and restore the complex brain function.

‘We have provided evidence showing that abnormal epigenetic regulation of glutamate receptor expression and function did contribute to cognitive decline in Alzheimer’s disease.

‘If many of the dysregulated genes in Alzheimer’s are normalized by targeting specific epigenetic enzymes, it will be possible to restore cognitive function and behavior.’

What have been the best-selling funds, trusts and shares since lockdown?