Britain’s bee population is under threat – with one third of species suffering declines, research has shown.

The decline in bees and another key species, hoverflies, could spell trouble for Britain’s farmers in the future as they rely on the insects to pollinate crops.

But gardeners can help bees by letting parts of their lawns grow longer, experts say, and allow patches of wild flowers to grow.

The value of pollinating insects to the UK economy has been estimated at £690 million per year.

So any impact on the ‘services’ provided by bees and hoverflies could have a big financial impact.

Britain’s bee population is under threat – with one third of species suffering declines, research has shown. The decline in bees and another key species, hoverflies, could spell trouble for Britain’s farmers in the future as they rely on the insects to pollinate crops  (stock image)

They found on average, the geographic range of bees and hoverflies declined by about a quarter, with greater losses in the upland areas of northern Britain where species fell by 55 per cent while species in southern Britain fell by 25 per cent.

In general, rarer, more specialist species were being hit hardest by declines, the research suggested.

Dr Gary Powney, from the Centre for Ecology and Hydrology in Wallingford, Oxfordshire, said: ‘A huge proportion of species are decreasing.’

There had been, however, increases in 12 per cent of species – mainly wild bees that act as ‘key pollinators’ for crops such as oilseed rape.

This may have been caused by environmental measures put in place by farmers, such as growing wild flowers in the margins of crop fields to encourage bumblebees, the research suggested.

Dr Powney said: ‘In many respects it is a worrying trend,’ which could have an impact on the UK’s food supply.

Explaining possible reasons for the decline, he said: ‘It is perhaps unsurprising, you have got ever intensifying agricultural systems, loss of key habitats nationally, you’ve got climate change.

‘For some pollinators you have introductions of diseases, you have invasive species, there are a myriad of pressures impacting on these populations.’ 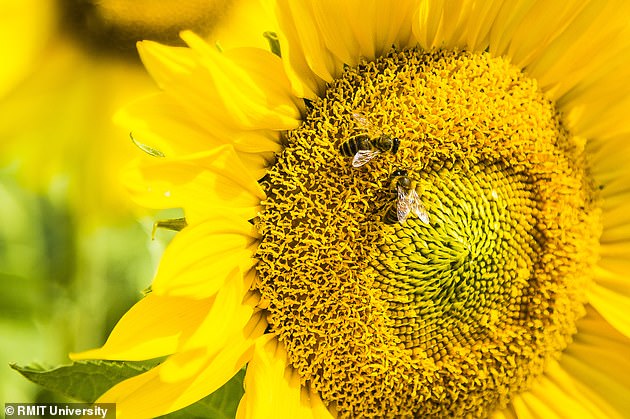 Dr Helen Roy said that gardeners could ‘try to leave part of your garden unmanaged,’ adding, ‘some people will like to have a manicured lawn, but if they can leave a patch of lawn unmown, that would be fantastic.’

Patches of bare earth were also useful for solitary bee species such as mining bees which nest in holes in the ground, she added, and people could also grow lavender in window boxes to help bees.

The scientists said it remained to be seen how pollinators might have been affected by insecticide restrictions brought in since the study was carried out.

In 2013 the European Union introduced a temporary ban on the widespread use of insecticides known as neonicotinoids in light of evidence suggesting they harmed bees.

Last year, the ban on three of the main neonicotinoid types was widened to cover all crops grown outdoors and made permanent.

Matt Shardlow, chief executive of the charity Buglife, said: ‘This new paper provides further evidence, were it needed, that our pollinators are in trouble and that the health of our environment and food supply cannot be taken for granted.

‘Solitary bees, rare bees and bees and hoverflies that live in the uplands are in particular trouble and need urgent help.’

WHAT IS THE HONEYBEE CRISIS?

Honeybees, both domestic and wild, are responsible for around 80 per cent of worldwide pollination, according to Greenpeace.

But bee colony collapses across the globe are threatening their vital work.

Bees are dying from a combination of pesticides, habitat destruction, drought, nutrition deficit, global warming and air pollution among other factors.

The global bee crisis can potentially be solved if dangerous pesticides are eliminated, wild habitats are preserved and ecological agriculture is restored, according to Greenpeace (file photo)

Greenpeace has reported: ‘The bottom line is that we know humans are largely responsible for the two most prominent causes: Pesticides and habitat loss.’

This is important for a number of reasons, chief among them the amount of work bees put into our food production.

Greenpeace has suggested the following solutions to the problem:

What price must Bitcoin reclaim for a renewed bull market in...

How three quarters of 25 to 30-year-olds have used their phones...

Return of the Falcon Heavy: SpaceX will attempt second launch of...