The eagle has FINALLY landed! First sea eagle to fly in England’s skies for 240 years settles on the Isle of Wight after incredible 422 mile tour of his new territory

A sea eagle that took a trip over southern England has completed a 422-mile round trip and now returned home to the Isle of Wight.

Culver, a male, was one of six birds released on the island over the Solent as part of a rewilding programme throughout the UK.

He was released nine days ago and took flight to the north, reaching as far afield as Essex before heading back homeward bound.

The bird has not been seen in England for 240 years but conservationists hope to revive the ailing species.

Culver, a male, was one of six birds released on the island over the Solent as part of a rewilding programme throughout the UK. he has now been spotted back home in the isle of Wight

Rewilding aims to return land to a more natural state – by allowing nature to take its course.

Activists and plans call for rewilding to be encouraged in order to save essential areas and species.

Their site reads: ‘We can give it a helping hand by creating the right conditions – by removing dykes and dams to free up rivers, by stopping active management of wildlife populations, by allowing natural forest regeneration, and by reintroducing species that have disappeared as a result of man’s actions.

‘Then we should step back and let nature manage itself.’

Plans include introducing long-gone or valuable keystone species to a region and preserving natural order.

Having been hatched in Scotland and taken to the Isle of Wight, the other five eagles known as ‘flying barn doors’ for their incredible wingspans of up to eight feet – seemed content to scout out their new home.

Culver’s journey saw him fly over central London, including iconic landmarks such as Big Ben and Westminster.

August 31 at 12.23pm, Culver was tracked flying an incredible 2,300ft in the sky above the capital. His flight was even captured by one eagle-eyed bird enthusiast, although the image taken on Victoria Street, Westminster, shows just a ‘speck in the sky’.

His incredible journey has been detailed by the Roy Dennis Wildlife Foundation, the charity that has been licensed to carry out the historic release of sea eagles by Natural England.

After a week exploring the Isle of Wight, Culver decided to fly further afield on August 29 – setting off across the Solent at 11.21am before soaring to 3,300ft above the New Forest, the highest altitude of his adventure.

The foundation issued an update on his progress, saying: ‘He’s done it!

‘After an extraordinary eight day, 680 km (422mile) flight around southern England, Culver made it back to the Isle of Wight today.

‘What’s more, he made landfall over Culver Cliff – the site of the last known breeding White-tailed Eagles in southern England in 1780; the place he’s named after.’

He added: ‘This morning Culver remained close to his roost site on Thorney Island until just after 09:30. While he was there he was seen by Wez Smith, who sent us this great photo of Culver.

‘Wez saw Culver head-off south-west and, sure enough, at 10:05 he began crossing the Solent. 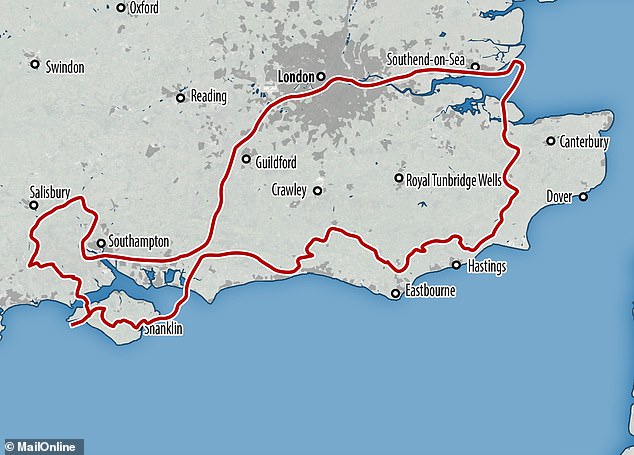 The foundation that watched Culver’s progress issued an update on him, saying: ‘He’s done it! ‘After an extraordinary eight day, 680 km (422mile) flight [pictured] round southern England, Culver made it back to the Isle of Wight today’

‘Once on the Island, Culver showed no sign of letting up. He continued on a westerly heading and at 13:08 was just south of Yarmouth at an altitude of 379 metres and then, twenty minutes later, he was circling over another of the Isle of Wight’s famous landmarks: the Needles.

‘He then turned back east over Tennyson Down – the exact spot he had set-off from eight days earlier. What an incredible flight for a young White-tailed Eagle.

‘It will be fascinating to see what Culver does next. Will he remain on the Isle of Wight, like the other five young eagles, or go wandering again? Watch this space.’

The introduction of sea eagles has not been welcomed by everyone – with some farmers voicing fears that the eagles may attack their lambs.

An earlier plan to reintroduce eagles in Norfolk was rejected – with the potential dangers to livestock cited.