A London couple have successfully used a loophole in child benefit rules to win state pension credits worth tens of thousands of pounds – a victory that could help many other parents.

Christina Fang and Pierre-Jean Noziere made a common error by putting the ‘wrong’ partner’s name down on their child benefit form.

But the couple managed to convince HMRC they were unaware his filling in the form could result in her losing huge sums in state pension in old age, and the taxman has waived the usual time restrictions on correcting the record.

Ms Fang now stands to gain up to £40,000 if she lives for a couple of decades after reaching state pension age.

State pension credits: More than 200,000 families are believed to have put the ‘wrong’ parent’s name on their child benefit form

It’s important a parent who is not working is the one named on the form to get child benefit, as credits are worthless to someone who is employed and already paying enough National Insurance towards their state pension.

More than 200,000 families are believed to have made this mistake on their child benefit form, according to an official estimate.

And it’s likely that most could argue they had not understood the obscure link between who fills it in and the state pension.

This is Money is campaigning on behalf of parents who miss out on credits towards their state pension because they either fail to apply for child benefit or make innocent blunders.

One of our key campaign demands has been for the Government to remove red tape and drop the time limits on credit transfers between couples who put the wrong name down.

Have you applied for a state pension credit swap with a partner?

If you have succeeded in persuading HMRC, failed or are still waiting, email [email protected] and tell us your story.

In this case, HMRC agreed to let Ms Fang swap eight years of credits with her husband, and dropped the time limit on when parents are meant to apply to do this retrospectively

HMRC recently said it would accept late applications from couples wanting to transfer credits, though only if they can persuade it the delay is ‘reasonable in the circumstances’ and meet all other conditions.

If making an innocent mistake qualifies as ‘reasonable’, Ms Fang and Mr Noziere’s win could pave the way for many other couples to gain back state pension.

See the box below for how to make a transfer application.

How did the London couple win their case?

Christina Fang, 49, learnt she could have lost valuable credits towards her state pension after she came across an old article by This is Money columnist and ex-Pensions Minster Steve Webb.

Help! I put my husband’s name first on child benefit form and lost some state pension: Steve Webb says this danger should be flagged more clearly was published on our site last summer.

Ms Fang, a former manager at a pharmaceutical firm, had health issues after giving birth, so her accountant husband, Pierre-Jean Noziere, 35, filled in their child benefit form.

After the article tipped her off to this mistake, she wrote to This is Money saying: ‘I had my first child in 2009 followed by twins in 2014 – I have been out of work since.

‘At the time of filling in the form my husband who is working put his name on the application and, just like that, it seems I have lost 10 years of contribution to my state pension.

‘This is torturing me. The thought that all my work as a mother raising three children is seen as worthless to the Government and they will not lift a finger to allow us to rectify what is essentially an admin error is beyond me.’

Why did HMRC relent on time limits in this case?

HMRC explained the decision to allow the credit transfer as follows:

‘There isn’t a set definition of ‘reasonable circumstances’ – the decision maker will look at each case on its own merits with a view to achieving the best outcome possible for the customer having considered the totality of the case.

‘In Ms Fang’s case, it was clear from her application that she was not aware of the significance of the National Insureance credits, nor that they would as standard be awarded to the individual who made the claim to child benefit, as the form had been completed by her husband.

‘In addition, she had taken the step of correcting the position going forward by transferring the child benefit claim from her husband’s name to her name.’

Ms Fang applied for a transfer of credits to her from her husband, and the couple included an explanation of why they had not asked before – that they didn’t know she should have been the one to fill in the child benefit form to safeguard her future state pension.

She also applied to transfer future child benefit into her name instead from now onwards, which is something that HMRC noted when assessing this case – see the box on the right.

The first year the couple applied for was incomplete due to the timing of their oldest child’s birth, and their application for the 2018-19 tax year can’t be made yet so Ms Fang will have to ask again this October.

If that succeeds, she could end up with nine years of credits in total.

After their win, Mr Noziere, said he and his wife were very happy about the outcome and hoped the details of their case would benefit other couples.

‘There is fairness in the system,’ he said. ‘We didn’t have to fight really hard. We sent three lines of comment. It was about not having had any idea. We didn’t have the full information.’

Mr Noziere said he hadn’t realised the implications for his wife’s state pension when he filled in the child benefit form instead of her.

‘It was lack of awareness. My wife was unwell after giving birth. I decided not to bother her with the details. She was unwell for a few months.’

Steve Webb, now policy director at Royal London, said: ‘I am delighted to hear that Ms Fang’s application has been successful and that at least eight years of credits can be transferred.

‘This will make a huge difference to her eventual pension, and could add tens of thousands of pounds in total over the course of her retirement.

‘The worry is that there are still hundreds of thousands of families where the higher earner is claiming the child benefit and where the lower earner is therefore potentially missing out on these valuable credits.

‘HMRC should end the uncertainty over this issue and make it clear that anyone who can benefit by transferring credits will be allowed to do so.’ 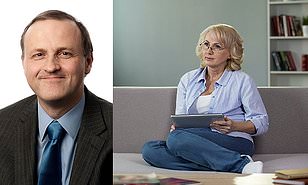 Mr Webb has launched a petition calling for mums to be handed back valuable state pension credits, which they lost by not signing up for child benefit because they didn’t qualify for it. Read more here, and you can find the petition here.

When launching our campaign, we called on the Government to sort out the shambles couples were facing when trying to get the taxman to pass credits between them, and to drop time limits on applications made for years after 2010.

An Essex couple whose case we covered subsequently won 10 years’ worth of state pension credits after spending months fighting the taxman’s baffling red tape on transfers.

Raina Thurgood and Martin Ryott, who were originally refused the right to transfer state pension qualifying years from her to him, eventually had the time limit rules waived.

The 10 years of credits he gained could be worth up to £50,000, if Mr Thurgood lives for a couple of decades after reaching state pension age.

It was unclear at the time whether this would benefit other couples.

But HMRC changed its guidance on time limits in January in a little-noticed update to its website, which was spotted by former Pensions Minister Steve Webb.

This revealed a loophole that means parents trying to fix errors on child benefit forms to boost their state pension can disregard official time restrictions – they are supposed to apply before the end of the following tax year to swap each separate credit – provided they make a strong enough case to the taxman.

HMRC later admitted to This is Money it has always considered late applications in practice, and that it updated its official guidance to make this clear to parents and encourage them to ask for transfers.

Its move came as HMRC figures provided to the Treasury Committee of MPs showed more than 200,000 parents could be missing out on state pension credits due to putting the wrong partner’s name on the form.

Treasury committee chair, Nicky Morgan MP, has called on the Government to do more to inform parents who are missing out on credits about the transfer option.

She said in response to HMRC’s change in guidance: ‘The question that now arises is what does HMRC consider ‘reasonable’ circumstances for not applying for the transfer on time?

‘As many people were, and still are, unaware of this issue, and may have fallen foul of a tight deadline, HMRC appears to now be taking a more pragmatic approach to the time limit.

‘There is still more to be done to improve the process and make parents aware of the need to make a claim.’

What are the rules for swapping state pension credits?

* Couples have the opportunity to transfer child benefit credits received by one parent to the other parent.

* The rules on transferring the National Insurance credit attached to child benefit to a resident spouse, partner or civil partner are here.

* Generally parents should apply for NI credit transfers before the end of the following tax year, but late applications may be considered where there are reasonable circumstances for the delay, according to HMRC.

* HMRC encourages parents to make sure that the where there is a non-working parent, any claim to Child Benefit is in their name to ensure they don’t have to continuously make applications to transfer NI credits

Details of how to swap state pension qualifying years before 2010 are here, and afterwards here.