By Press Association and This Is Money

The UK’s construction output has plummeted at its steepest rate since 2009, as Brexit uncertainty and weaker demand hit all three major areas of the industry.

The Markit/CIPS UK Construction purchasing managers’ index (PMI) recorded a reading of 43.1 for June, down from 48.6 in May.

Economists were expecting a figure of 49.2. A reading above 50 indicates growth, below represents contraction.

Construction output has plummeted at its steepest rate since 2009

It is the steepest reduction in overall construction output since April 2009 and marks the fourth time the sector has contracted in the past five months.

All three main categories declined in June, with commercial work remaining the worst performer and recording its steepest drop since December 2009.

Civil engineering also saw its biggest fall in almost a decade, with the rate of contraction at its fastest since October 2009.

Tim Moore, associate director at IHS Markit, which compiles the survey, said: ‘The latest survey reveals weakness across the board for the UK construction sector, with house building, commercial work and civil engineering activity all falling sharply in June.

‘Delays to new projects in response to deepening political and economic uncertainty were the main reasons cited by construction companies for the fastest drop in total construction output since April 2009.’

Following the delay to the Brexit deadline in March and the announcement that Prime Minister Theresa May would resign in June, uncertainty has continued to hang over several areas of the economy. 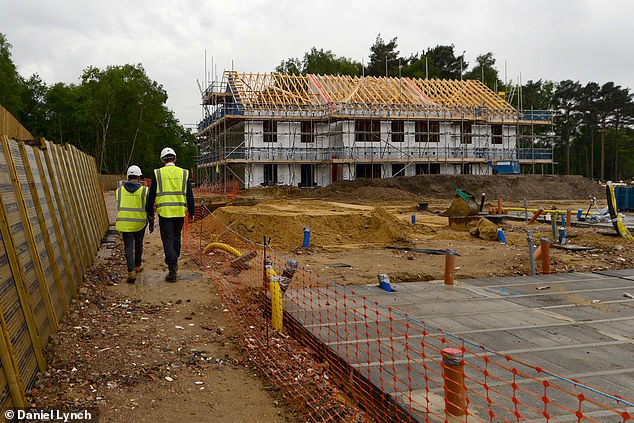 All construction sectors have seen falls in activity, including house building

The report said that firms had adopted a ‘wait-and-see’ approach to spending decisions, putting a dampener on new work for construction companies.

There was one bright spot in employment, as demand for construction staff remained relatively resilient. However this followed a massive decline in May, when the survey showed the steepest fall in hiring since 2012.

Duncan Brock, group director at the Chartered Institute of Procurement & Supply, said: ‘The pain of Brexit indecision was felt across all three sub-sectors but the previously resilient housing sector suffered the fastest drop in three years which is frankly worrying news.

‘However, we are still a long way off the level of entrenchment seen in the last economic crisis, as payroll numbers remained relatively steady as any job cuts were just delays in replacing staff.

‘But with the onslaught of indecision combined with a weakening global economy, this could easily turn into more months of contraction as future optimism remains subdued.’

MARKET REPORT: Travel firms take off as Britons book trips to the Med