‘Nuclear icebreaker’ ship being built by China weighs 33,000-tons, is 500-feet long and can break through ice sheets – but is it a prototype for a military vessel?

An experimental 33,000-ton nuclear-powered ship that could cut through thick ocean ice sheets is being built by China.

The state-owned vessel, dubbed a ‘nuclear icebreaker’,  is designed to cut through the frozen seas north of Russia and North America.

The vessel will be fitted with two 25-megawatt water reactors, allowing the enormous vessel to travel at a max speed of 11.5 knots, or just over 13 miles per hour.

The country does not yet have a nuclear-propelled surface ship but does have a fleet of nuclear fuelled submarines.

Although they have not specified what the ship is for, but experts speculate it could be a testing ground for future attempts to create a fleet of nuclear powered vessels.

An experimental 33,000-ton nuclear-powered ship that could cut through thick ocean ice sheets is being built by China. This graphic compares the Chinese vessel with Russia’s largest icebreaker

These specifications make it fifteen feet (two metres) longer and a around seven thousand tons heavier than Russia’s Arktika-class icebreaker.

The state, however, has not specified how it plans to use the ship once it’s built but suggested that it will be an ‘experimental platform’.

Currently, Russia operates all nuclear-powered icebreakers in the world. With the first one launched in 1957 and the latest put into service in 2007. 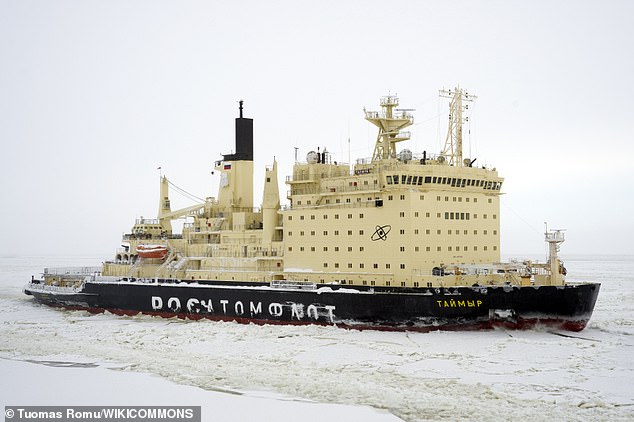 China they have not specified what the ship is for but experts speculate  that it could be a testing ground for future attempts to create a fleet of nuclear powered vessels. Currently, Russia operates all nuclear-powered icebreakers in the world. Here, the Taymyr icebreaker 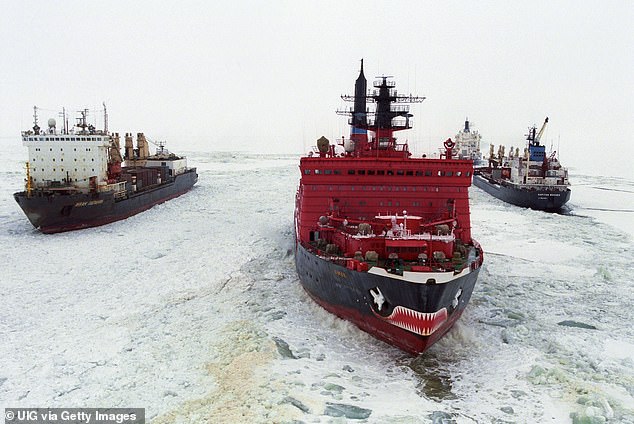 Shipping traffic along the Northern Sea Route shot up by 50 percent last year, to ten million tons. The main benefit of the greater size is not the thickness of the ice it can break though, but the width of the channel it leaves in its wake

He told the South China Morning Post that the the ‘and experience could be used for next-generation aircraft carriers’.

The vessel is too small to be an aircraft carrier but one military expert said the ship would help develop China’s ‘shipbuilding ability’, or that it could be a bid to dominate the Arctic.

The deadline for bids was Wednesday, and no businesses from outside China were allowed to enter the running.

Nuclear icebreaker ships are the example of the latest technology that has been brought into the ice breaking industry.

For Russia, the Northern Sea Route is most importantly a slowly thawing shortcut for its Liquefied Natural Gas (LNG) exports to East Asia, especially China.

The main benefit of the greater size is not the thickness of the ice it can break though, but the width of the channel it leaves in its wake.

Shipping traffic along the Northern Arctic route shot up to 50 per cent last year, to ten million tons.

WHY IS SHIPPING PREDICTED TO INCREASE IN THE ARCTIC?

In August 2016, the first large cruise ship travelled through the Northwest Passage, the northern waterway linking the Atlantic and Pacific oceans.

The following year, the first ship without an icebreaker plied the Northern Sea Route, a path along Russia’s Arctic coast that was, until recently, impassable by unescorted commercial vessels.

In recent decades parts of the Arctic seas have become increasingly ice-free in late summer and early fall.

As sea ice is expected to continue to recede due to climate change, seasonal ship traffic from tourism and freight is projected to rise.

Travel through the Arctic Ocean is already beginning, with the Russian route having the most potential for commercial ships.

More than 100 vessels passed through the Northwest Passage during that time, with more than half being small, private vessels like personal yachts.

Experts say even the North Pole could be passable in a matter of decades.

Seven Airlines Close Billions of Dollars in Loans With Treasury

12,000 savers face wipeout as Wellesley Finance teeters on the brink

The bizarre story of a royal nanny and Prince Charles’s ‘special...

How we are unwittingly drawn to those with a similar life...