Children had milk teeth 100,000 years ago, just like they do today: Ancient human ancestor had the same dental development as modern day infants, scientists find

An ancient child of a long-extinct human-like species from 104,000 years ago in northern China had teeth that grew in a similar way to modern-day humans.

Remains of the ancient six-year-old child, known as the Xujiayao juvenile, were first found in the 1970s and reanalysed.

Evidence found the dental development was very similar to what is seen in young children today.

Both the archaic hominid and modern Homo sapiens have a prolonged period of infantile dependency on others to survive.

Remains of an ancient six-year-old child were studied and experts found the dental development was very similar to what you would find in a child today. The East Asian archaic hominin fossil is known as the Xujiayao juvenile (pictured)

Debbie Guatelli-Steinberg, co-author of the study and professor of anthropology at The Ohio State University, said: ‘The Xujiayao juvenile is the oldest fossil found in east Asia that has dental development comparable to modern humans,’ Guatelli-Steinberg said.

‘It may suggest that these archaic humans had a slow life history like modern humans, with a prolonged period of childhood dependency.’

Growth lines in the teeth were well preserved and these provide a record of dental development.

Modern humans take far longer to develop their adult teeth than our primate relatives and it is believed this is due to a longer period of child dependency.

Researchers used synchrotron X-ray imaging to look inside the fossil to see the internal structure of the teeth and study the rate of tooth development.

Although the teeth resemble modern humans, the rest of the skull does not, scientists say. 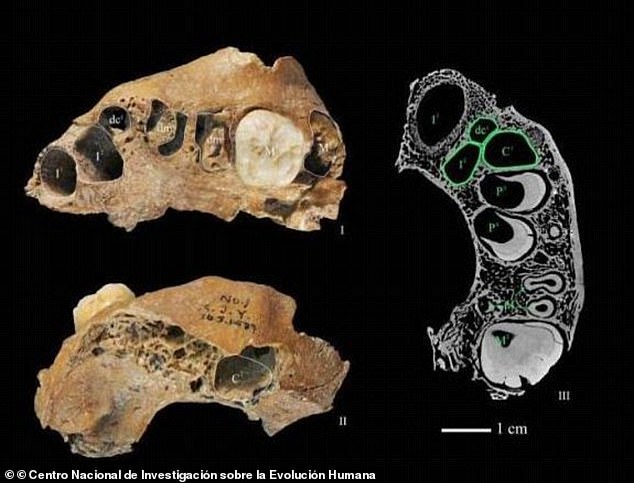 Pictured Xujiayao immature left partial maxilla – or the two bones that form the upper jaw. Researchers used synchrotron X-ray imaging to look inside the fossil to see the internal structure of the teeth and study the rate of tooth development 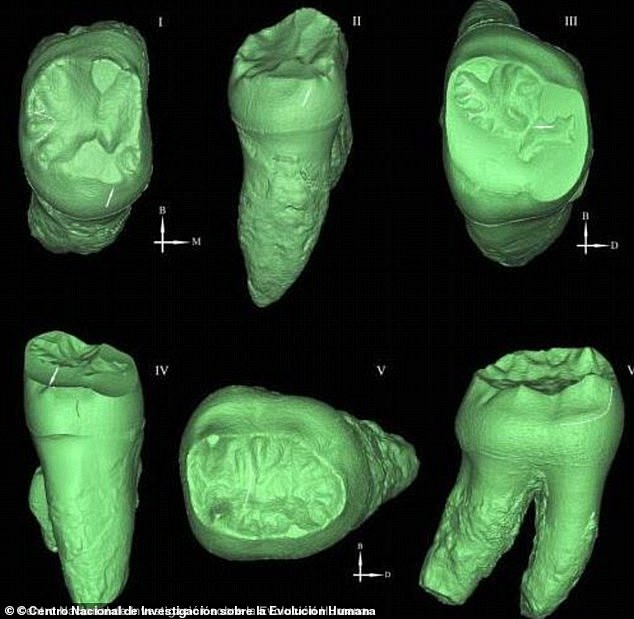 A mysterious ancient creature, resembling both a Neanderthal and a modern human, has been unearthed in China. The fossils, discovered in a cave in the Xujiayao site in 1976, are made up of skull fragments. Pictured are three of the teeth shown at different angles which were again studied by the latest study

‘We don’t know exactly where this enigmatic East Asian hominin fits in human evolution,’ said Song Xing, lead author of the study, who is at the Chinese Academy of Sciences in Beijing.

‘It has some affinities to archaic human relatives like the Denisovans and Neanderthals with, as we found, some more modern features. It is a strange mosaic.’

A molar had just erupted through into the mouth and scientists say this is what is known in modern dentistry as the six-year-molar.

It had erupted a few months before death and had started to wear down slightly and had a root that was about three-quarters complete, similar to humans today.

‘We found that this juvenile was growing up – at least dentally – according to a schedule similar to that of modern people,’ study co-author Mackie O’Hara, a graduate student in anthropology at Ohio State University said.

WHEN DID HUMANS START USING TOOLS?

It is hard for scientists to say precisely when humans started making tools because the more primitive remains look like a natural object rather than a human artefact.

The oldest-known instruments are the Oldowan stone tools from Ethiopia, which date back about 2.6 million years.

The Acheulean tool technology period – up to 1.76 million years ago – featured large stone hand axes made from flint and quartzite.

Towards the end of this period, the tools became more refined and then followed the so-called Levallois technique, which saw the creation of scrapers, slicers, needled and flattened needles.

About 50,000 years ago more refined and specialised flint tools were made and used by Neanderthals and it is believed it was at this stage tools were constructed out of bone.

As human culture advanced, artefacts such as fish hooks, buttons and bone needles were used.

Cut marks have found on animal bones that have been dated to be 3.4 million years old – around the time that a squat ape-like ancestor called Australopithecus afarensis – known as Lucy – roamed Africa.

7 back-to-school gadgets to help you focus