British Airways airoplane Boeing B747-400 in the sky above clouds.

In case the suites and lobster at the front of the plane didn’t give it away, a new ranking shows how high-paying travelers rule the skies.

The routes that make the most money are those frequented by business travelers, where airlines have been scrambling to add high-end seats at both four- and sometimes five-digit prices.

British Airways’ nonstop flights between New York’s John F. Kennedy International Airport and London’s Heathrow Airport brought in nearly $1.2 billion in revenue in the 12 months ended in March 2019, far and away more than any other route in the world, according to data released this week by aviation statistics firm OAG.

Other high-revenue routes include the less than 90-minute hop on Qantas connection between Melbourne and Sydney, which made the largest Australian carrier $861 million over that period, and United Airlines service between San Francisco and Newark. That flight generated $689 million. Following that was American Airlines‘ Los Angeles-JFK route, which  brought in nearly $662 million.

In an industry with slim profit margins that scarcely leave the single digits, airlines pour resources into such high-revenue routes, adding new seating because they know they attract corporate accounts and other high spenders.

“Those airlines who have [those routes] will defend them at all costs,” said OAG executive vice president John Grant. “They’ll fight for those passengers and not cancel them.”

Airlines are also trying to get passengers to pay for premium seats, rather than give them away with free upgrades, and they’re getting much better at it.

Delta Air Lines last month said it is selling more than 60% of its first class seats, up from about 13% in 2011 — bad news for anyone expecting a free upgrade. The airline is also getting less than half of its revenue from the coach cabin, compared with about two-thirds six years ago, it said late last year.

JetBlue Airways plans to start service to London from New York and Boston in 2021, using its Mint class to court travelers away from entrenched rivals on the lucrative routes with cheaper premium-class lie-flat seats.

U.S. airlines have also taken a cue from their international competitors in adding a new class in between standard coach and business class known as premium economy, which for a higher fare gets travelers earlier boarding, a roomier seat, a larger entertainment screen and higher-end food, among other perks. 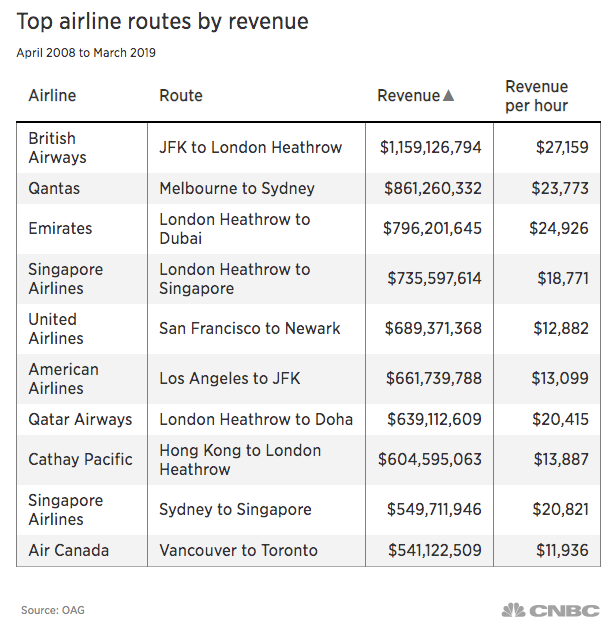 Carnival rally a sign ‘this market is driven by hope,’ says Jim Cramer

A Day in Houston: 3 Meals, 3 Cultures, One City