There are currently around 24,000 electric car chargers spread across 8,000 locations in the UK.

While most are installed at fairly glum service stations, supermarket car parks and residential areas, there are some that a selection that are surrounded by breathtaking views.

Researchers have taken it upon themselves to find the 10 best places electric vehicle owners can charge their cars while take in some of the most stunning scenery the country has to offer.

Picturesque plug-in points: Drivers can enjoy incredible views of the Glencoe Mountains in the Scottish Highlands while they replenish the batteries of their electric vehicle. There’s also a skeletal ski instructor guarding the rapid chargers

Among the incredible locations is a fairly remote charging point buried in the village of Ballachulish in the Scottish Highlands.

The rapid charger not only has incredible views of the Glencoe Mountains but has its own skeletal ski instructor mascot next to the plug-in point.

And it’s not the only faraway charger to feature in the list.

Another of the picturesque plug-in destinations is in Penrith in the beautiful Lake District region.

Located in the car park of the Another Place Hotel, the pair of Tesla Destination chargers offer scenic views of the Ullswater Lake. 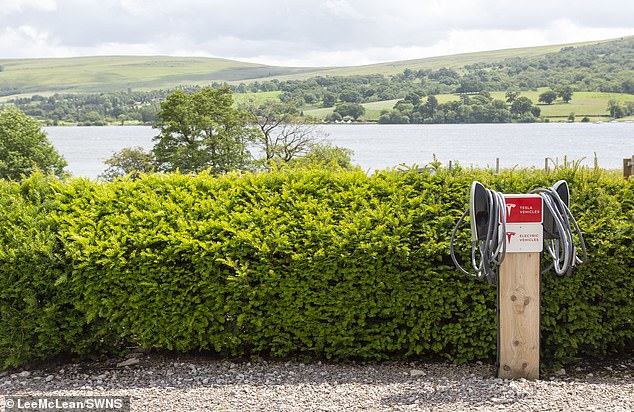 The 10 featured chargers have been hand picked by Go Ultra Low – the government and industry campaign to promote the uptake of electric vehicles.

It commissioned a series of photographs of chargepoints across the UK in a bid to find those with the best surroundings.

Poppy Welch, head of Go Ultra Low, said: ‘From a charging perspective, there has never been a better time to be an EV owner in the UK.

‘Government and private investment in the network in recent years has seen an impressive rise in chargepoint numbers, with a mix of types and providers across the length and breadth of the UK.

‘Many motorists think chargepoints are just found in urban areas like car parks in towns and cities, however, this simply isn’t the case, so we thought the best way to demonstrate this is to show people.

‘These images showcase the significant expansion in charging infrastructure highlighting the hidden gems that exist in the UK’s charging network.’

Other destinations to make the top 10 list includes a twin chargepoint nestled in the Blackdown Hills, near Yarcombe, overlooking the rolling hills of Devon and a hotel in the shadow of Snowdon in Wales. 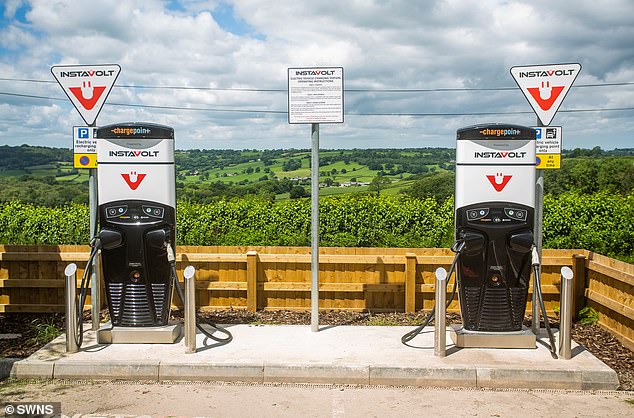 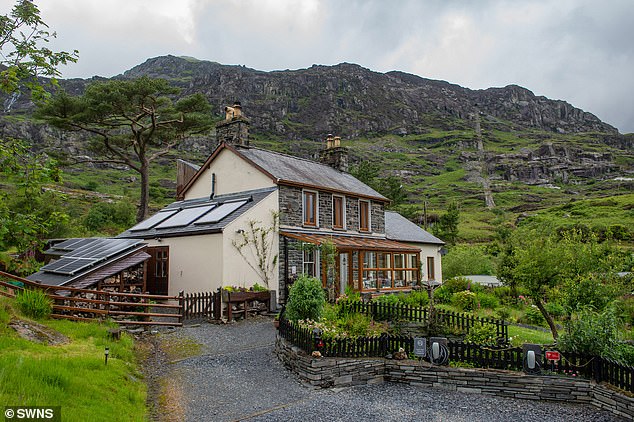 ‘Our three connectors only use electricity from green renewable sources and enjoy the beautiful surroundings of the Moelwyn mountains and a hydro lake, helping electric motorists to enjoy travelling in the Welsh countryside.’

On the East of the UK, in St Leonard’s-On-Sea, there is an EV chargepoint overlooking the English Channel over Hastings beach, while those hiking the tors of Dartmoor National Park can plug in overnight at Bovey Castle.

Bude, in Cornwall, is also home to a sea view spot to plug in. 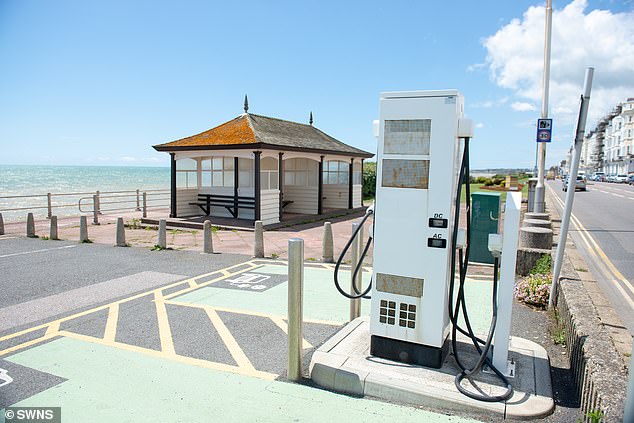 Want to catch some rays while your car gets some volts? This sea view in Hastings should fit the bill 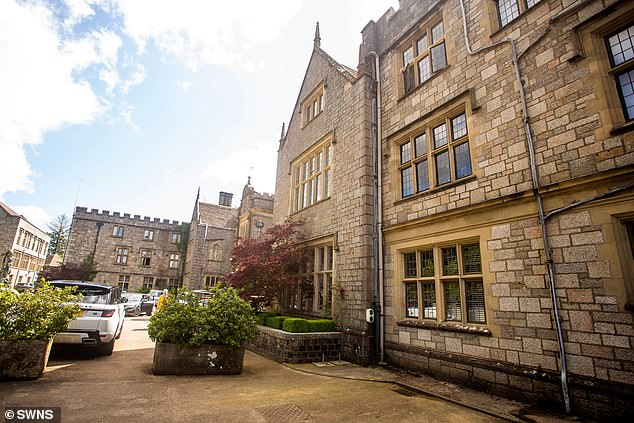 The electric charging station at the Bovey Castle in Devon 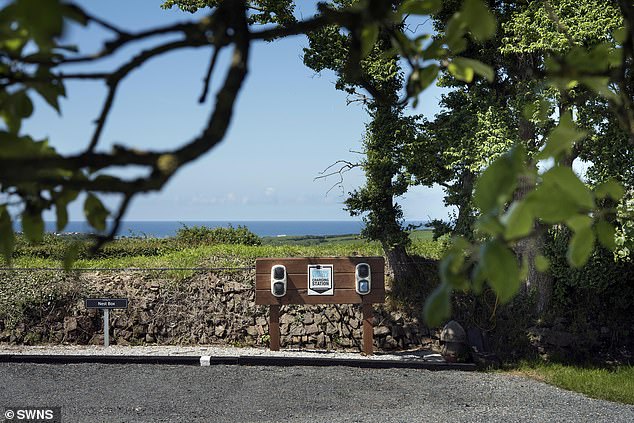 More sea views, this time in Bude, in Cornwall. It proves that the network is extending beyond city centres

However, it’s not just in the depths of countryside which provide the perfect spot to park up and charge up.

Those cruising around the city of Glasgow can make a stop off at Blythswood Square to recharge their car batteries.

Charging points are also appearing across London after the Ultra Low Emissions Zone (ULEZ) has come into force, deterring less economical cars from the heart of the city.

The images captured in the capital show the charging spots which offer views of the 310 metre high Shard building or of the 200-acre Battersea Park.

Investment from Highways England means that by 2020, drivers on motorways and major A roads will never be more than 20 miles from a rapid charger. 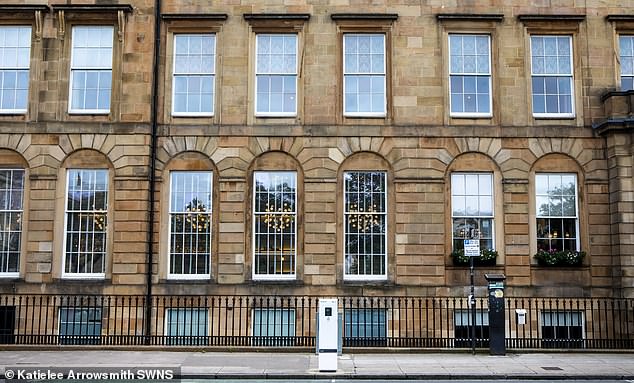 Go Ultra Low, the joint industry and government campaign to promote the uptake of electric cars, sourced the 10 best charging spots in stunning locations. This one is at Blythswood Square, Glasgow 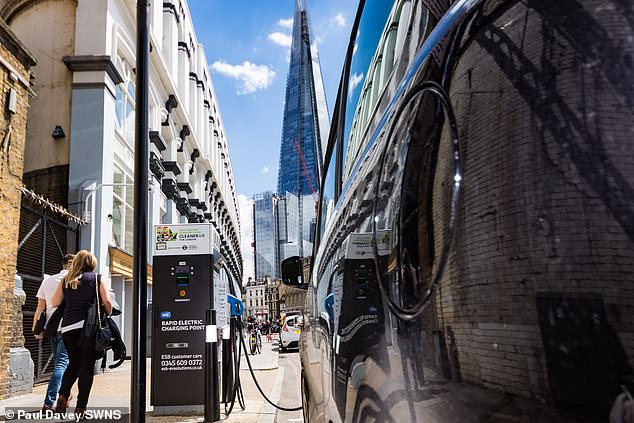 There are hundreds of chargers in London, though this one has a great view of the Shard 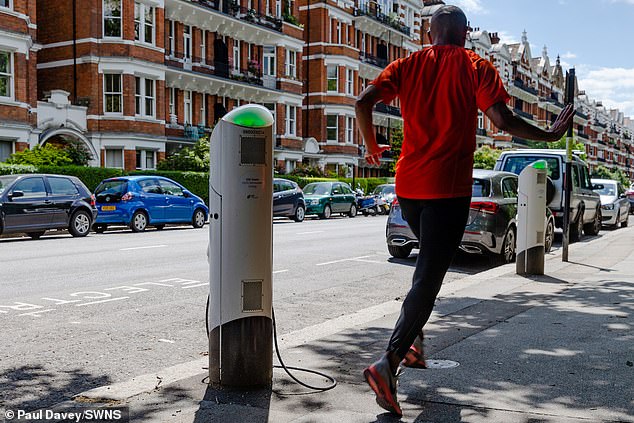 Driving your plug-in car close to Battersea Park? These charge points are handily located near the gorgeous 200-acre green space

Iconic Locations From “Emily in Paris”

Liverpool boss Jurgen Klopp has six undroppables but should sell 10...

Visiting Puerto Rico, and Finding the Up Beat