Don’t be shocked. But German car firm BMW has increased two controversial elements of its new 5-series executive saloon and estate models – the grille and the price – as it also boosts the ‘electrification’ of its range.

But it insists that the growth of the ever-expanding BMW kidney-shaped grille is as ‘modest’ as the rise of its the showroom sticker prices – and that both are accompanied by more equipment as standard for the refreshed version of its big earning autobahn-storming cruiser-bruiser.

As an example of the price rises for the 5-series, BMW said the new incoming 520i SE now starts from £37,970 on-the-road compared to £37,600 for the outgoing model – an increase of £370. Other increase will vary across the range as cars become more expensive.

Is bigger better? Two elements of the latest 5 Series have been increased: prices across the range and the size of its grille

The firm notes: ’The BMW kidney grille has extra width and height , dropping down further into the front apron and framed by a single-piece surround.’

BMW has already come under fire for the big, bold and some would say increasingly cartoonish looking grilles on its cars – particularly on its giant 4X4s – which are seen as an attempt to woo buyers in China, the Far East and Middle East.

The new 5-series range includes five petrol-electric plug-in hybrid or ‘PHEV’ models including – for the first time from November – on its Touring estate variant. Until now that extra electric PHEV option has been restricted to the saloon.

The plug-in hybrid cars include a BMW 530e Saloon and four-cylinder Touring – with and without all-wheel drive – plus the 545e saloon with all-wheel drive xDrive. All will have an electric only range of nearly 42 miles.

BMW notes:’From November 2020, the latest generation BMW eDrive technology will be combined with a four-cylinder petrol engine on the new BMW 530e Saloon and – for the very first time – the BMW 530e Touring.’

In addition, BMW says the use of ‘mild hybrid’ technology with a 48-volt starter generator will be rolled out to nearly all of its models 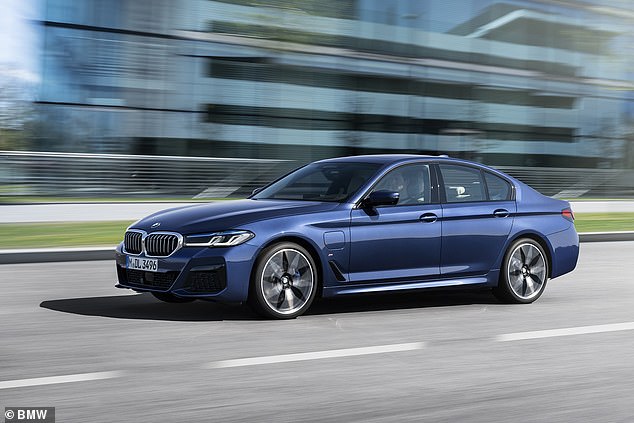 The new 5-series range includes five petrol-electric plug-in hybrid or ‘PHEV’ models including – for the first time from November – on its Touring estate variant. Until now that extra electric PHEV option has been restricted to the saloon

Two key exceptions are the plug-in hybrids and a new motorsport-inspired M Performance M550i xDrive saloon available for the first time in the UK and powered by a brutish 530hp 4.4 litre twin-turbo-charged petrol engine.

The new 5-series range will be launched officially in July and comes as Prime Minister Boris Johnson has announced that car showrooms in the UK can open from June 1 provided proper social distancing and safety measures are in place to combat the corona virus.

Although the biggest-selling BMW 3-series is the ‘bread and butter’ car for BMW, the executive 5-series puts the jam on top and is a heartland car for BMW, seen as a badge of upwardly mobile success, particularly for those climbing the corporate ladder. The Touring estate carries that across by adding greater flexibility for those with an active lifestyle or growing family. More than 600,000 5-series Saloon and Touring models have been sold world-wide since the current generation was launched in 2016.

BMW is flagging up ‘significant modifications’ and a ‘fresh appearance’ to their front and rear ends the 5-series saloon and Touring estate, including headlight upgrades. 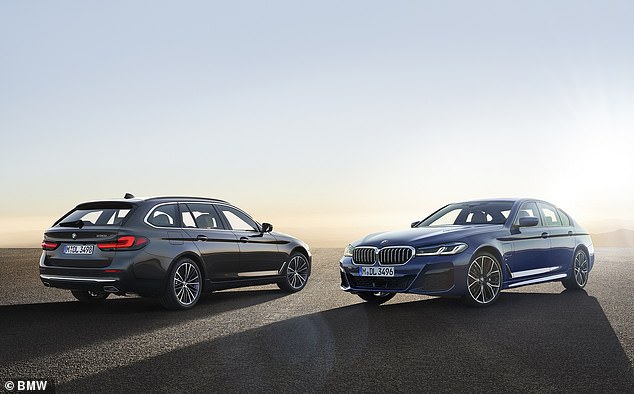 Interior upgrades include new trim surfaces, buttons in high-gloss black, and a hi-tech plus ‘Live Cockpit Professional’ infotainment syatem with a with 12.3-inch control display.

The standard SE trim level includes a choice of 17, 18 and 19 inch wheels, but 20 inch options are available on more expensive models, including the beefy M550i xDrive which has its own ‘exclusive’ version.

For a ‘limited production window’ BMW will offer an M Sport Edition model with exclusive content, available on the Saloon and Touring.

If you like fiddling around with tech, the new 5-series dashboard display is powered by its latest ‘Operating System 7.0’ which includes a digital ‘intelligent Personal Assistant’ you can talk to using Alexa-style voice control, and smart-phone integration.

The range also has the latest camera- and radar-based driving aids, including steering and lane-control and active cruise control.

BMW confirmed that prices for the enhanced and upgraded 5-series range had increased, but that cars had more equipment and technology which accounted for the rises. It could not provide an across the board figure for the increase. 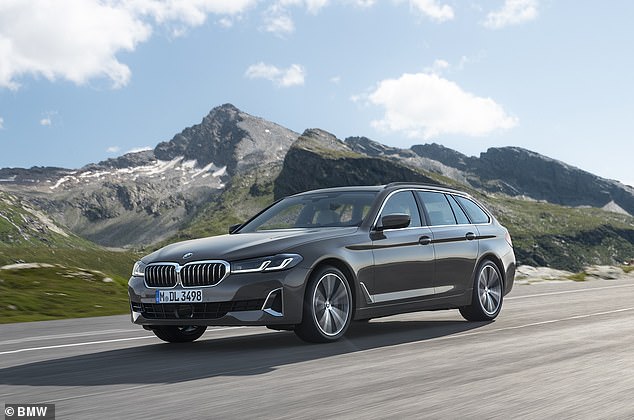 Estate versions of the 5 Series – which BMW calls Touring models – will be around £2,500 more expensive than before

There are plenty of options to push your costs up further.

A humble steering wheel heater may warm your heart at only £270.

But an upgrade to a Bowers and Wilkins surround-sound system will set you back £4,220. 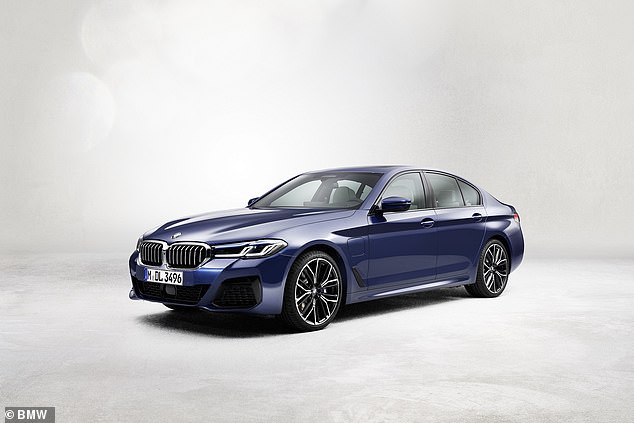 The range also has the latest camera- and radar-based driving aids, including steering and lane-control and active cruise control

BMW said: ‘Alongside the 530hp V8 found in the range-topping BMW M550i xDrive Saloon, the new BMW 5 Series comes with a choice of three additional petrol and three diesel engines producing between 184hp and 340hp.

‘All the engines are complemented with an eight-speed Steptronic transmission as standard. BMW xDrive intelligent all-wheel drive is also offered on select variants including the 520d, 530d, 530e, 540i, 545e and M550i models.’

The company, with its headquarters in Munich, in the independently-minded German state of Bavaria where most big grills involve large sausages added: ‘The market introduction of the new BMW 5 Series is in July 2020 and both models will be produced at BMW Plant Dingolfing in Bavaria. The new BMW 5 Series Saloon will also be built by our production partner Magna Steyr in Graz, Austria.’

How do I drive more traffic to my sales funnel? ClickFunnels Answers

Car Sales Fell in the Second Quarter, Despite Deals and Covid-19 Stimulus

Car Sales Fell in the Second Quarter, Despite Deals and Covid-19...

How To Create a Winning Video Sales Letter (VSL)

Is it any wonder women like Maggie had no idea that...

US can’t crush us with its politically motivated spying claims, says...