Measuring a patient’s blood pressure could one day be as simple as getting them to take a selfie.

A study found using a smartphone to video someone’s face for two minutes could produce a blood pressure reading that was 96 per cent accurate.

Regular monitoring is important for patients with high blood pressure – medically known as hypertension – to help them keep the killer condition under control.

But many patients often cannot be bothered to use the inflatable arm cuffs or other cumbersome devices, scientists say.

They added that, if tests of the ‘exciting’ technique continue to be successful, ‘obtaining blood pressure information with a click of a camera may become reality’.

The British Heart Foundation said the technology could be a ‘game-changer’ if it’s proven to work for everyone and in normal living environments as well as labs.

The software can use an iPhone camera to monitor the flow of blood in someone’s face. Experts said using a phone to measure blood pressure would make it easier for patients who may be reluctant to use more clunky equipment and put their health at risk by avoiding it 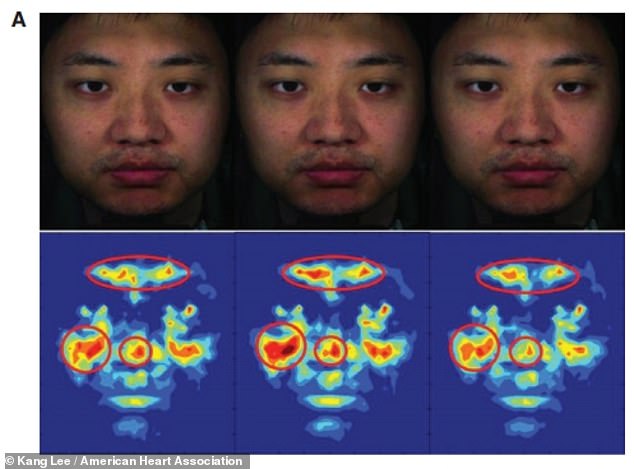 By tracking the intensity and movement of light reflected from blood vessels in the face, researchers used artificial intelligence to work out someone’s blood pressure with 96 per cent accuracy

Researchers at the University of Toronto in Canada tried the iPhone-testing method on 1,328 people with normal blood pressure.

The technology works by picking up light reflected from blood vessels behind the skin in the face and using that to measure blood flow.

Face skin is so thin that light can travel through it and then bounce back off a red protein called haemoglobin, which carries oxygen in the blood.

Phone cameras are sensitive enough to pick up the specific colour of this reflected light and software can be used to track the blood’s movement around the face.

By scanning for the density and motion of blood in the cheeks, nose and forehead, scientists say they can work out blood pressure with 96 per cent accuracy.

‘High blood pressure is a major contributor to cardiovascular disease – a leading cause of death and disability,’ said Dr Kang Lee. 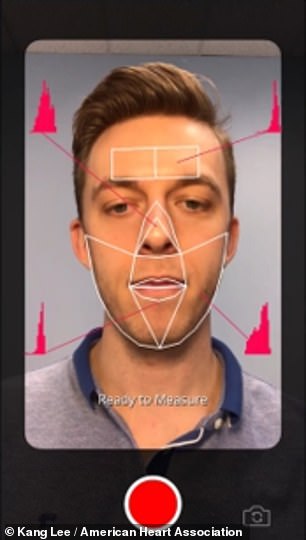 ‘If future studies confirm our results and show this method can be used to measure blood pressures that are clinically high or low, we will have the option of a contactless and non-invasive method to monitor blood pressures conveniently – perhaps anytime and anywhere – for health management purposes.’

Dr Lee’s study required people to take two-minute videos of themselves, but he hopes to be able to cut this down to 30 seconds without losing effectiveness.

The tests were also done in a studio with bright, controlled lighting – less reliable lighting at home or outside may reduce how well the camera works.

Dr Lee said the early tests have shown the technology is accurate enough to comply with international standards for a blood pressure measuring device.

A staggering 16million people in the UK – about one in three adults – have high blood pressure, according to the charity Blood Pressure UK.

And the American Heart Association says there are around 103million people in the US with the condition. 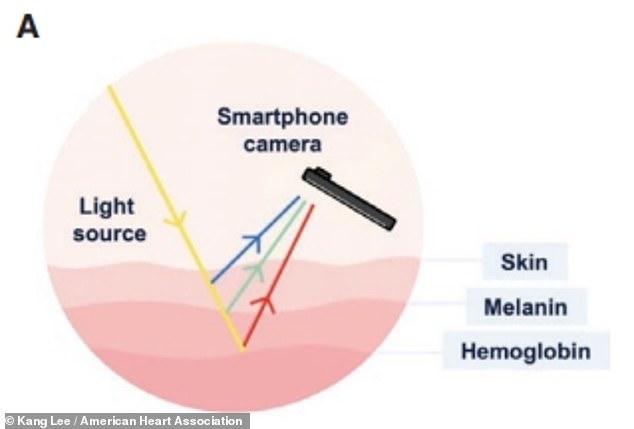 The technology works because skin on the face is so thin that light can pass through it and then reflect back off a protein in the blood called haemoglobin, and this particular light can be picked up by an iPhone camera, the scientists said 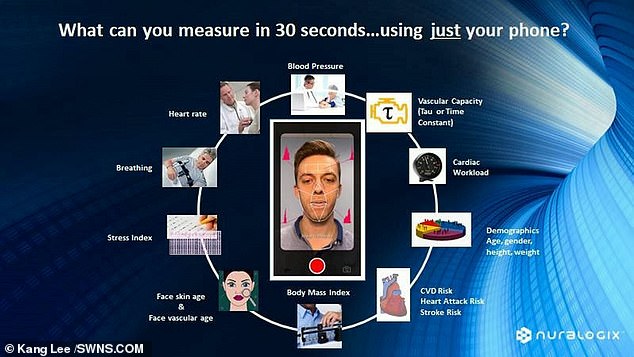 The iPhone app may also be able to measure someone’s heart rate, breathing and risk of getting heart disease or having stroke – all from a face scan, its creators claim 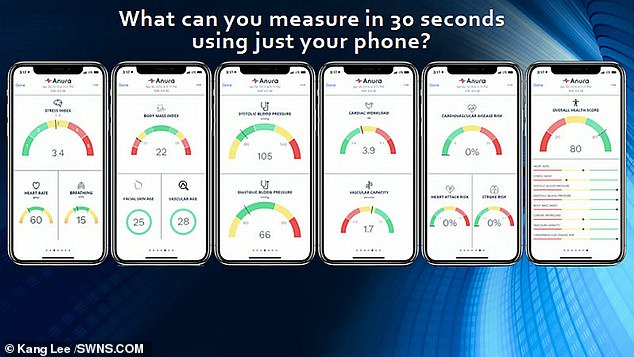 After the user scans their face the app would deliver a customised health report based on what it noticed. The blood pressure function has only been tested on healthy people so far

People who are overweight, over 65, don’t eat enough fruit and vegetables, don’t exercise enough or smoke or drink are at a higher risk of the condition.

Those who fail to reduce their blood pressure by eating healthily, exercising and sleeping may have to rely on medication to keep it down.

Dr Ramakrishna Mukkamala, from Michigan State University, added: ‘If future studies could confirm this exciting result in [high blood pressure] patients and with video camera measurements made during daily life, then obtaining blood pressure information with a click of a camera may become reality.’

Professor Metin Avkiran, associate medical director at the British Heart Foundation told MailOnline: ‘This innovative research is a powerful example of how data from mobile technology can be harnessed and analysed by modern machine learning methods to potentially transform cardiovascular care.

‘If further research can confirm that this new approach works in people with very different skin tones, a range of blood pressures and in standard living environments rather than controlled laboratory conditions, then it could be a game changer in helping doctors diagnose and treat high blood pressure more effectively.’

The research was published in the journal Circulation: Cardiovascular Imaging by the American Heart Association.

WHAT IS HIGH BLOOD PRESSURE?

High blood pressure, or hypertension, rarely has noticeable symptoms. But if untreated, it increases your risk of serious problems such as heart attacks and strokes.

More than one in four adults in the UK have high blood pressure, although many won’t realise it.

Blood pressure is recorded with two numbers. The systolic pressure (higher number) is the force at which your heart pumps blood around your body.

The diastolic pressure (lower number) is the resistance to the blood flow in the blood vessels. They’re both measured in millimetres of mercury (mmHg).

As a general guide:

If your blood pressure is too high, it puts extra strain on your blood vessels, heart and other organs, such as the brain, kidneys and eyes.

Persistent high blood pressure can increase your risk of a number of serious and potentially life-threatening conditions, such as:

Man, 21, SNAPPED four of his front teeth after ‘guzzling six...

Celebrity facialist reveals how you should REALLY get rid of a...