Black just got blacker: Darkest material ever created is ’10 times darker than anything else’ and blocks out 99.96 per cent of light, scientists reveal

By James Gant For Mailonline

Scientists have created the ‘blackest material ever made’ which absorbs 99.96 per cent of light and is ten times blacker than anything made before.

Researchers from Massachusetts Institute of Technology (MIT) covered a £1.6million diamond with the substance in a bid to prove its blackness.

The hi-tech, ‘cloak-like’ material was made from carbon nanotubes (CNT) and grown on aluminium foil, absorbing 99.96 per cent of light – making it the blackest material ever made.

Researchers from Massachusetts Institute of Technology (MIT) covered a £1.6million diamond (pictured before and after) with the substance in a bid to prove its blackness

Vantablack S-VIS was the successor of Vantablack, which was created with low-temperature carbon nanotubes and was developed in 2014.

The spray can typically achieving a reflectance of less than 0.2 per cent.

Unlike other black absorbers, it offers this exceptional performance across a wide-range of viewing angles and wavelengths, which is critical for optical instruments, as well as in many aesthetic applications.

It is, for example, some 17 times less reflective than the super-black paint used for minimising stray light in the Hubble space telescope.

The active element of Vantablack S-VIS is a carbon nanotube matrix.

The coating is applied using a proprietary process that includes a number of pre- and post-application steps to achieve its ultra-low reflectance.

The firm says not to use the spray for ‘applications where it is subject to physical contact or abrasion’.

Vantablack S-VIS was developed for protected objects that are either packaged or behind some type of glass or protective layer, and only on stable surfaces that can withstand temperatures of 212 degrees Fahrenheit.

The scientists are unsure of the mechanics which cause the material to be so dark, but believe it is due to the pairing of carbon nanotubes and chlorine-etched aluminium.

The nanotubes, when assembled into a vertical ‘forest’, can transform almost all light into heat, according to some scientists.

Professor Brian Wardle said: ‘CNT forests of different varieties are known to be extremely black, but there is a lack of mechanistic understanding as to why this material is the blackest. That needs further study.’

It worked to stunning effect, leaving the normally bright gem as a flat, black void.

But the artistic experiment may have practical uses too, giving space telescopes a material for optical blinders to reduce unwanted glare.

It is even darker than vantablack, which was previously thought to be the blackest material in the world.

Professor Wardle said: ‘There are optical and space science applications for very black materials, and of course, artists have been interested in black, going back well before the Renaissance.’ 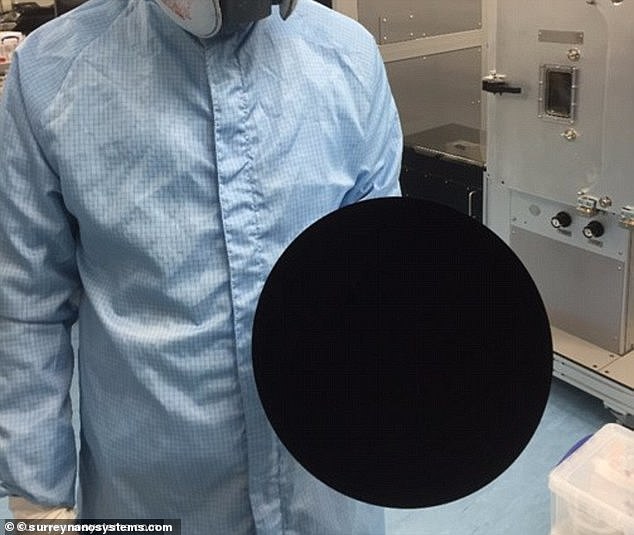 It is even darker than vantablack (pictured), which was previously thought to be the blackest material in the world

He added: ‘Our material is 10 times blacker than anything that’s ever been reported, but I think the blackest black is a constantly moving target.

‘Someone will find a blacker material, and eventually we’ll understand all the underlying mechanisms, and will be able to properly engineer the ultimate black.’

The findings have been published in the ACS-Applied Materials and Interfaces today.

They are also showcasing the cloak-like material as part of a new exhibit at the New York Stock Exchange, titled ‘The Redemption of Vanity’.

Arsenal have already completed a transfer coup after sealing deal for...