BIG SHOT OF THE WEEK: Banking’s certainly had a few iffy chiefs in recent years, but Barclays’ Jes Staley isn’t one of them 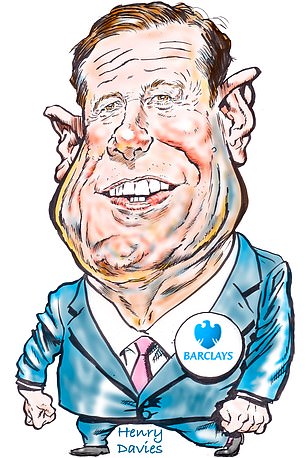 The New York Stock Exchange had never had to be shut down before, which was hardly surprising.

For over 200 years, the imposing, neoclassical building in lower Manhattan has been the proud symbol of America’s global economic dominance.

Short of The White House and The Pentagon, there are few more heavily guarded buildings on the eastern seaboard.

That was until an enterprising young HIV activist breached the main balcony, armed with bogus credentials and a set of handcuffs, and began showering the place with fake $100 bills and angry leaflets which read ‘**** your profiteering.’ Down on the trading floor, amidst the ensuing chaos, JP Morgan broker Jes Staley turned to his colleagues with a puckish grin and announced proudly: ‘That’s my brother up there.’

The year was 1989 and I mention this salty tale because the plight of Jes’s younger brother Peter – gay; HIV; recovering addict – appears to have had a formative effect on the Barclays chief’s career.

He was a big champion of women in the board room and so-called LBGT issues way before it became fashionable.

Last year Staley survived a scandal which would have sunk lesser bankers. When a whistle-blower wrote to the bank making allegations about an employee’s past, wholly unrelated to his professional capabilities, Staley went berserk and launched a witch hunt into the identity of the whistle-blower, a huge no-no in banking.

It was a thoroughly stupid thing to do. But was it motivated by some sort of sense of injustice, an urge to protect a colleague in need of empathy? It’s hard not to think so. Admittedly Staley doesn’t look one of life’s diversity champions. Built like a Dallas Cowboy line-backer, one would assume he was the embodiment of Wall Street machismo. In his spare time he likes sailing on his yacht Bequia.

Born in Boston, raised in Philadelphia, his prosperous father ran a chemicals firm. ‘James’ as he was christened, joined JP Morgan straight out of college in 1979.

As a trainee, he and his peers studied the case of W T Grant stores, the Wal-Mart of its day, which filed for the second-largest bankruptcy in American history in 1976. Awkwardly for Staley, the man responsible for running it into the ground was his grandfather Edward.

Working in the bank’s South American division, the job took him to Brazil in 1982.

It was there that Jes met his wife Deby, an interior designer.

At the end of 80s he was recalled to New York to run the equities department. Stints running the asset management branch, then the private bank division followed. In 2009, JP’s all-powerful chief executive Jamie Dimon handed Staley the keys to the investment bank, effectively making him the de facto number two.

His relationship with Dimon appears to have been strong. But like several execs before him, it became clear to Staley that Dimon was going nowhere. In 2013, after 30 years at America’s largest bank, Staley departed to work for hedge fund Blue Mountain Capital as managing partner. When he arrived at Barclays two years later, replacing the hapless Antony Jenkins, MPs were wary.

After the high octane years of Bob Diamond they were determined to make Barclays a dull, safe-as-houses lender again. Here was another investment banker, they warned, who would want to turn it back into a Las Vegas casino.

Those fears, thus far, have proved unfounded. But last year was rocky. Staley scraped through the whistle-blowing scandal with a £650,000 personal fine, loose change from his £4.5m remuneration, and there was an embarrassing incident when he fell victim to an email prank purporting to be from his chairman John McFarlane.

He has a chance to make amends next week when Barclays announces its yearly results next week. Bob Diamond; Fred Goodwin; James Crosby. Banking’s certainly had a few iffy chiefs in recent years. But Barclays’ Jes Staley isn’t one of them.

Elon Musk, ‘SNL,’ Dogecoin, and Mother’s Day: The Making of a Comic Cocktail

Earth can ‘shortcut to future’ by stealing alien tech from cigar-shaped...

CDC Shares Guidance to Allow for Cruising to Restart

Does the Boris bounce have legs? This is Money podcast