By Jamie Nimmo For The Mail On Sunday

The investor made famous by the Hollywood movie The Big Short has placed bets against British banks Standard Chartered and HSBC in a bid to cash in on the Hong Kong crisis.

Steve Eisman, who was played by the actor Steve Carell in the Oscar-winning film about the sub-prime mortgage meltdown, was one of several managers who ran a fund at Neuberger Berman that ‘shorted’ Royal Bank of Scotland, Lloyds and Barclays.

But now he is in charge of his own fund at the New York firm, and is targeting two more British banks – Standard Chartered and HSBC – both of which have a focus on Hong Kong.

Eisman, who made his name betting that the US housing market would crash just before the financial crisis of 2008-9, said both were bets on the ‘risks in Hong Kong’ and rising violence in the former British colony.

His newly formed Absolute Alpha Fund has taken out a short position worth about £1.4 million against Standard Chartered, according to analysts at short-selling expert Breakout Point.

It is one of the fund’s largest short positions – a trading tactic where investors borrow shares from another for a fee, sell them, and hope to buy them back later at a lower price, pocketing the difference before they are returned to their original owner.

Standard Chartered is the only British company listed among the fund’s major positions. However, in a video update posted on the firm’s website earlier this month, Eisman also revealed that he was shorting HSBC.

Hong Kong has been shaken by huge anti-government protests in the past few months, triggered by a controversial extradition bill. 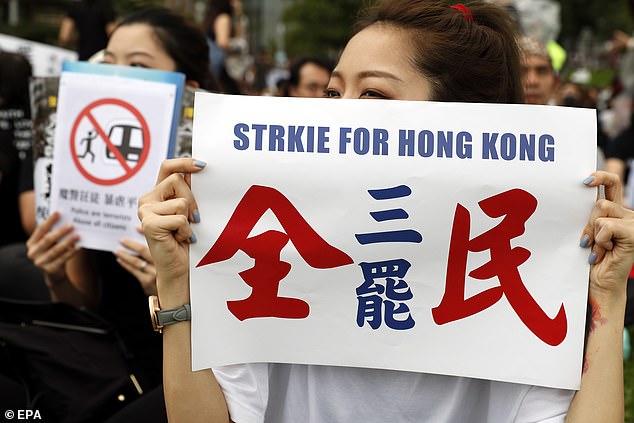 The protests, which began peacefully, have escalated into violent clashes between protesters and police

The protests, which began peacefully, have escalated into violent clashes between protesters and police. Last month, Standard Chartered and HSBC both spoke out against the violence and took out newspaper adverts calling for a peaceful resolution.

Eisman said: ‘The new risk in the marketplace is Hong Kong. There are tremendous fears that this will not end well, that it will end in violence, and that will have bad ramifications for the global economy.’

His fund’s short position in Standard Chartered is far larger than that his previous fund took out against the other trio of British banks. Together, those three positions were worth just £1.1 million.

Eisman, who was given the name Mark Baum in the 2015 movie, also revealed he had raised his bets against other UK banks because of the rising risk of a No Deal Brexit.

He said he doesn’t own shares in a European bank because of the state of the economy.

‘When European bank analysts come to see me, there’s a contest of who can convince Steve Eisman to buy [shares in] one European bank,’ he said. ‘No one’s won that contest yet. The way things are going it’s not going to happen for a while.’

More than half of drivers in Britain exceed 30mph limits, says...