Meat has successfully been grown in space for the first time using a 3D bioprinter.

Bovine cells taken from cows on earth were transported to the International Space Station before being grown into muscle-tissue to create a small strip of steak.

The experiment led by 3D Bioprinting Solutions on September 26 saw the cells provided by Aleph Farms bio-printed into a muscle-tissue structure.

German ESA astronaut Alexander Gerst took this image of the Earth reflecting light from the sun whilst aboard the International Space Station (ISS), where the beef was made

A natural regeneration of the tissue was then encouraged by mimicking conditions within cows’ body.

HOW DOES EATING MEAT AND DAIRY PRODUCTS HURT THE ENVIRONMENT?

Eating meat, eggs and dairy products hurts the environment in a number of different ways.

Cows, pigs and other farm animals release huge amounts of methane into the atmosphere. While there is less methane in the atmosphere than other greenhouse gases, it is around 25 times more effective than carbon dioxide at trapping heat.

Raising livestock also means converting forests into agricultural land, meaning CO2-absorbing trees are being cut down, further adding to climate change. More trees are cut down to convert land for crop growing, as around a third of all grain produced in the world is used to feed animals raised for human consumption.

As well as this, the nitrogen-based fertiliser used on crops adds to nitrous oxide emissions. Nitrous oxide is around 300 times more effective at trapping heat in the atmosphere. These fertilisers can also end up in rivers, further adding to pollution.

Overall, studies have shown that going vegetarian can reduce your carbon emissions from food by half. Going vegan can reduce this further still.

Taking place under micro gravity conditions in the Russian section of the Space Station, 399 km (248 miles) from the grassy cow filled fields of earth, the technique could be used to grow meat for those living on board the station to eat.

Aleph Farms successfully produced a steak strip on earth in December, which took two weeks to grow from cells.

They admitted that they hope to improve the taste of the grown steak strip.

The advancement could see the end of the farming industry as we know it – removing the welfare and environmental issues that currently surround the production of meat using livestock.

Didier Toubia, co-founder and chief executive of Aleph Farms said: ‘We are proving that cultivated meat can be produced anytime, anywhere, in any condition.

Addding: ‘In space, we don’t have 10,000 or 15,000 litres of water available to produce 1kg of beef. This joint experiment marks a significant first step toward achieving our vision to ensure food security for generations to come, while preserving our natural resources.’

This cutting-edge research in some of the most extreme environments imaginable, serves as an essential growth indicator of sustainable food production methods that don’t exacerbate land waste, water waste, and pollution.

These methods aimed at feeding the rapidly growing population, predicted to reach 10 billion individuals by 2050.

Numerous studies have pointed to the reduction of meat consumption by the population as a way to cut greenhouse gas emissions. 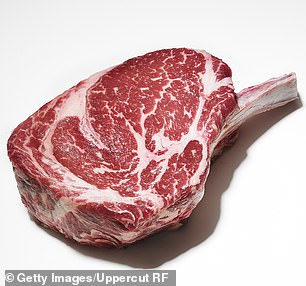 A raw beef steak. Researchers have said cutting meat out of people’s diets is one of the best ways they can reduce their environmental impact (stock image)

They concluded that eliminating consumption of meat and dairy is the single biggest way to reduce your environmental impact on Earth.

Plant-based diets reduce food’s emissions by up to 73 percent depending where you live. The loss of land to agriculture is the leading cause of the mass extinction of wildlife.

They found that even the very lowest impact meat and dairy products still cause more environmental harm than the least sustainable plant-based products.

Meat and dairy provide just 18 percent of calories and 37 percent of protein, but it uses 83 percent of farmland and produces 60 percent of agriculture’s greenhouse gas emissions. 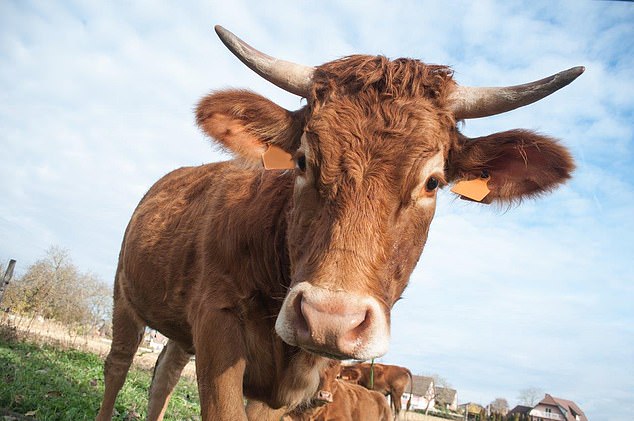 WHAT IS THE INTERNATIONAL SPACE STATION?

The International Space Station (ISS) is a $100 billion (£80 billion) science and engineering laboratory that orbits 250 miles (400 km) above Earth.

It has been permanently staffed by rotating crews of astronauts and cosmonauts since November 2000.

Research conducted aboard the ISS often requires one or more of the unusual conditions present in low Earth orbit, such as low-gravity or oxygen.

The US space agency, Nasa, spends about $3 billion (£2.4 billion) a year on the space station program, a level of funding that is endorsed by the Trump administration and Congress.

A U.S. House of Representatives committee that oversees Nasa has begun looking at whether to extend the program beyond 2024.

Alternatively the money could be used to speed up planned human space initiatives to the moon and Mars.

Miners Are Selling More Bitcoin Than They Are Mining