Dean Smith has vehemently denied claims that he had a tunnel bust-up with his assistant John Terry after Aston Villa‘s loss at Southampton.

Villa were defeated 2-0 by Southampton on Saturday afternoon at St Mary’s, which has left them in a hugely treacherous position just one point above the relegation zone with the business end of the season approaching.

And after the game, rumours circulated online that Smith was involved in a furious row in the tunnel with Terry. 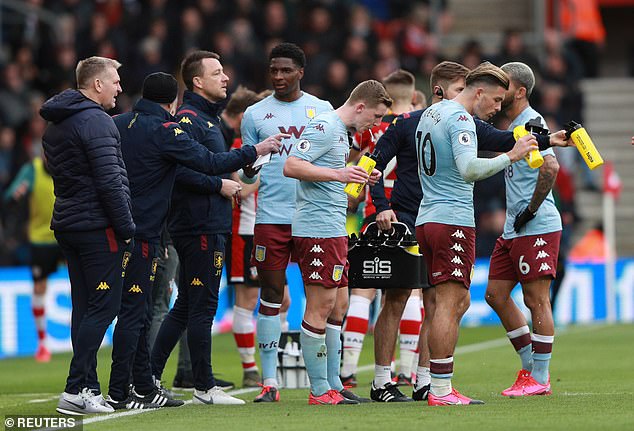 The claim was initially attributed to BBC Radio West Midlands – but the station emphatically refuted starting the rumour.

And Villa manager Smith has now furiously denied the claims – when quizzed about the alleged bust-up in his post-match press conference, he blasted: ‘That is bull****’.

Smith and Terry have enjoyed a successful time together at Villa Park ever since the former Chelsea captain hung up his boots in 2018.

They guided Villa back to the Premier League after beating Derby in the Championship play-off final last season, and have since led the club to this campaign’s Carabao Cup final where they will meet Manchester City next Sunday. However, their biggest task to date is ahead of them as they look to retain Villa’s status among England’s elite after yet another loss on the weekend.

Shane Long opened the scoring for Southampton before Stuart Armstrong wrapped up the three points for the hosts in injury-time at St Mary’s.

Villa currently languish in 17th in the Premier League, just one point above West Ham, who play Liverpool away in their match in hand on Monday night.

And things get no easier for Villa as five of their next six top flight games come against Leicester, Chelsea, Wolves, Liverpool and Manchester United.