A decade on from the financial crisis, you might have imagined the bosses of Britain’s biggest banks would have learned to keep themselves out of trouble.

But earlier this week, HSBC’s chief executive John Flint left the bank ‘by mutual agreement’ just 18 months after he was appointed, as insiders said he had failed to impress high-ranking colleagues.

And just last month, in a rant which stunned the City, Standard Chartered’s boss Bill Winters dismissed angry shareholders as ‘immature’ when a massive 40 per cent of them voted against his pay.

Earlier this week, HSBC’s chief executive John Flint left the bank ‘by mutual agreement’ just 18 months after he was appointed, as insiders said he had failed to impress

The problems at the top have cast a cloud on Britain’s two most internationally focused listed banks, which have long been considered an interesting alternative for investors to the more domestic High Street lenders.

HSBC is now officially without a permanent boss, although Flint’s interim replacement, Noel Quinn, is widely expected to be a shoo-in for the role.

And investor unease with Winters’ pay package, which totalled £4.6million last year and could be even bigger in 2019, may hold back growth in the share price.

Beyond the personality problems, there are worries that the trade war between the US and China and a wider global slowdown could hit both banks.

As Flint left on Monday, HSBC’s chairman Mark Tucker noted that the business environment had become more challenging, and reasoned that a change in leadership was needed to make the most of future opportunities.

He was forced to deny that the boardroom shake-up was anything to do with HSBC’s relationship with China, which has mooted putting the bank on a blacklist of ‘unreliable entities’ after it helped US authorities secure the arrest of the chief financial officer at mobile phone company Huawei. 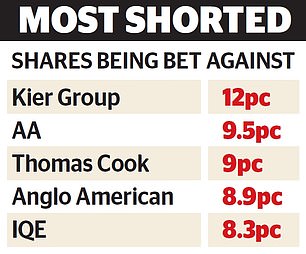 A deterioration in relations between HSBC and China would be alarming for a bank which makes more than half of its income in Asia. Hong Kong, a key market for both banks, could also cause woe as pro-democracy protests show no signs of abating.

And wider fears that tariffs imposed by US President Donald Trump, along with retaliatory penalties slapped on goods by his Chinese counterpart Xi Jinping, could precipitate a global slowdown will weigh on both banks.

So with all these problems in the mix, are HSBC and Standard Chartered still the top international picks that they once were?

Michael Wu, an analyst at financial data firm Morningstar, doesn’t expect any major tremors to reverberate from the leadership issues.

For Standard Chartered, investor anger is mainly confined to pay – particularly the chunky £460,000 paid annually towards Winters’ pension – while HSBC’s operations in the key locations of Hong Kong and the UK seem to be performing well, he says.

But he does forecast other clouds on the horizon, particularly if central banks resume their money-printing programmes to shore up the world economy.

‘Slowing global economic growth will result in a decline in loan growth and banking products as economic growth weakens,’ Wu says. ‘This in turn will lead to more relaxed monetary policies in the lowering of interest rates, and a potential increase in monetary easing.’

Both of these factors, he explains, would push down the banks’ net interest margins – or how much they make from lending compared to what they pay out on deposits.

HSBC boasts of having ‘unparalleled access to high growth markets’ such as China. But Jefferies analyst Joseph Dickerson says: ‘It is unclear how this is paying off.’

Banks such as HSBC and Standard Chartered have used their strong position in fast-growing Asian nations to set themselves apart from more mundane High Street competitors. And, to an extent, there is still some attraction in having that international edge.

China does have a booming middle class, and AJ Bell’s investment director Russ Mould says: ‘Both HSBC and Standard Chartered are, undeniably, options to consider for those investors who are looking to play the themes of growth and demographics in Asia.

Of course, the prospect that Brexit could slow down Britain’s economy has already weighed on the more domestically focused lenders. And for investors worried about a UK-specific slowdown, HSBC and Standard Chartered are much less vulnerable than their London-listed peers.

‘If the banks can prove that they can keep their noses out of fresh regulatory trouble and profit from their strong Asian positions by driving earnings higher, then the doubters may have to come around,’ says Mould.

It has been a tough few years for the UK’s once-mighty asset managers.

With the rise of cheaper online alternatives, tricky markets and growing questions about whether they deserve their hefty fees, stock picking companies have seen a rush for the exits across the board.

And Standard Life Aberdeen has certainly been no exception.

Since the company was formed through an £11billion merger of Standard Life and Aberdeen Asset Management two years ago, shares have fallen more than 40 per cent.

And investors have pulled out a grand total of £56.8billion in the past 18 months.

But there are reasons to think that the industry is finally heading out of the woods.

With markets increasingly turbulent, after a long period of relative stability following the financial crisis, firms that pick the best shares could yet win a place again in investors’ hearts.

And – the argument goes – as one of the biggest players, Standard Life Aberdeen should be able to reap the rewards.

But it would still take a brave trader to look at the stock’s trajectory and decide that now is a good time to buy.