Apple’s Jade is still highly unlikely to run in the Champion Hurdle at the Cheltenham Festival despite slaughtering the opposition in the Irish equivalent on Saturday.

The Gordon Elliott-trained mare is as short as 2-1 second favourite for the feature race on the opening day of the Festival on March 12 after she strolled home 16 lengths clear of 2018 winner Supasundae.

It was a fourth win of the season for the versatile eight-year-old and 10th career grade one success as she became the first mare to win the BHP Insurance Irish Champion since Like-A-Butterfly in 2003. 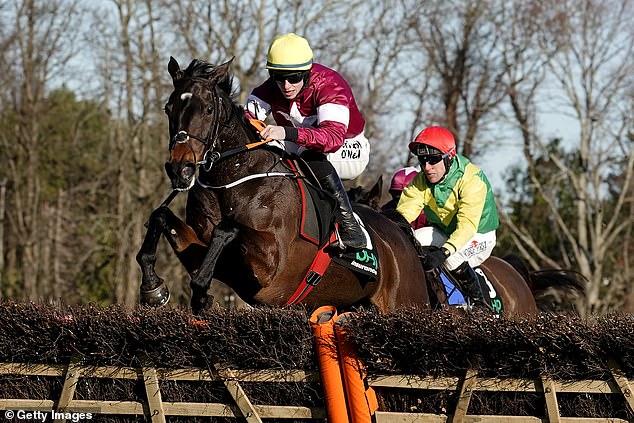 She looks the most potent threat around to dual Champion Hurdle winner Buveur D’Air, who in his final Festival prep-race as he routinely dismissed modest opposition to win the Contenders Hurdle for the third time at Sandown.

But despite Elliott saying all options will be left open, the mare’s owner, Ryanair boss Michael O’Leary and his brother Eddie, are adamant nothing will sway them from their plan to win the OLBG Mares’ Hurdle, a grade one contest which Apple’s Jade won in 2017 but one carrying much less cache than the Champion.

That’s despite their No 1 hope Samcro being ruled out of that race.

Apple’s Jade was beaten in that race last year but physical issues – now sorted – meant she is a radically different athletic specimen now.

She is odds-on favourite for her nominated target which, on yesterday’s showing, will be the nearest thing to a penalty kick as you can get at the most prestigious meeting of the jumps season. 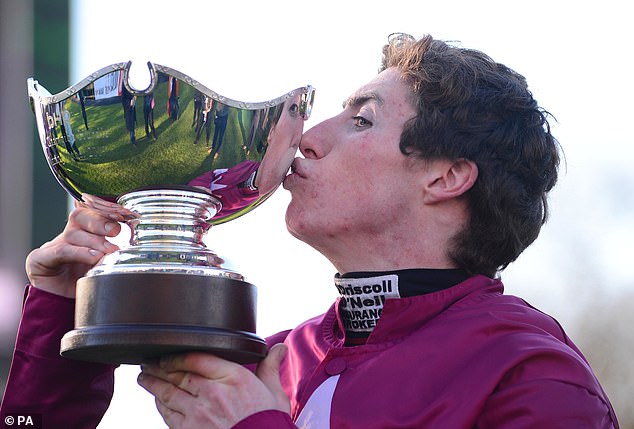 But Eddie O’Leary dismissed suggestions that dodging the Champion Hurdle would a represent a lack of ambition.

Eddie O’Leary said: ‘She qualifies for the Mares’ Hurdle and we haven’t one gelding qualified it!

‘We rule nothing out but, as of now, it is long odds-on she will run in the Mares’ Hurdle. I think people will remember her regardless of what race she runs in. She is a great mare.’

Day one of the Dublin Festival was good for Elliott. He also landed the Grade one two mile, six furlong novice hurdle with Commander Of Fleet, who is now a big contender for the three-mile Albert Bartlett Novices’ Hurdle while Bumper winner Envoi Allen is an equally solid contender for the Festival Bumper.

On Envoi Allen, Elliott said: ‘I have not been concentrating on England but he looks like he is the best (bumper horse) in Ireland. The plan is to go for the Festival Bumper.’ Joseph O’Brien’s Le Richebourg cemented his slot as a Arkle Chase force with a super-efficient seven-length win under Mark Walsh in the Irish equivalent.

Min had an even easier time to land the Grade One Dublin Chase for the second time. The problem for him is that imperious Altior stands in his way in the Queen Mother Champion Chase.