While those last pre-war years might be seen as strait-laced by today’s standards, there were some very racy exhibits at the 39-40 World’s Fair, including naked women billed as “Female Sun Worshippers” posing for photos in the fair’s ‘Amusement Zone’

RISQUE: The ‘Sun Worshippers’ worse little or nothing in special enclosures (Pic: NC)

The robots’ mechanical twerking and provocatively perky nipples seem almost modest compared with the sheer bra-tops and skimpy skirts worn by the ‘Sun Worshippers.’ Salvador Dali’s Dream of Venus pavilion at the fair also featured a surprising level of nudity for the period. 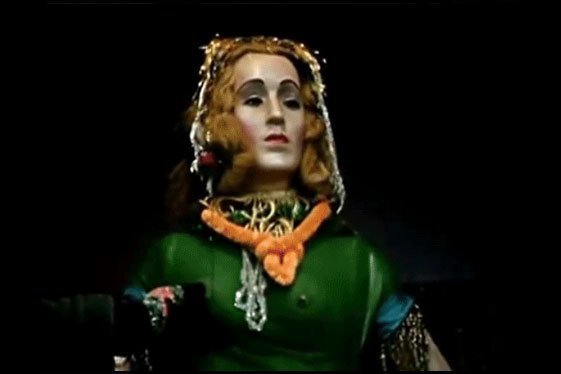 There was also the Bendix Lama Temple, a 28,000-piece full-sized replica of the 1767 Potala temple in Jehol, Manchuria. It wasn’t particularly well-attended at first so creator Vincent Hugo Bendix added a scandalous girlie show featuring young women in sheer bras and panties.

There were a number of protests by prominent politicians over the course of the fair about some of the the “low minded entertainment” on show, and and the NYPD’s Vice Squad raided shows more than once, but the racy displays were generally accepted by visitors.

Alongside the mechanical strippers there was also some other groundbreaking technology. Westinghouse exhibited their own robot called “Elektro the Moto-Man,” a 7-foot monster which could talk, distinguish between different colours, and smoke cigarettes.

Early TV sets were on show, as was a system called Scentovision, which transmitted smells in the same way that radio and TV did sound and picture.

Millennials flocking to become druids as ‘memberships double in decade’