An amateur astronomer in Texas snapping photos of Jupiter this week has captured the moment an object slammed into the side of the planet, creating a brief bright flash in the haze of its stormy skies.

Incredible footage shared on the Chappel Astro Twitter page, where astrophotographers Ethan and George Chappel post their observations, shows a fleeting white spot appear just south of the equator on August 7, before vanishing from sight in an instant.

While scientists have yet to confirm what exactly happened on the surface of our solar system’s largest planet, the photographer notes it ‘looks awfully like an impact flash.’

The discovery comes as NASA released a breathtaking new image of Jupiter as seen by the Hubble Space Telescope, revealing the giant planet’s trademark Great Red Spot and an intense color palette in its surrounding clouds.

Incredible footage shared on the Chappel Astro Twitter page, where astrophotographers Ethan and George Chappel post their observations, shows a fleeting white spot appear just south of the equator on August 7, before vanishing from sight in an instant

Impacts themselves may not be uncommon, but capturing a moment such as this is an incredibly rare feat.

‘After I checked the video and saw the flash, my mind started racing,’ Ethan Chappel told ScienceAlert.

‘I urgently felt the need to share it with people who would find the results useful.’

Though it has yet to be officially confirmed, scientists on social media say it appears to be a bolide – or a meteor that explodes in the atmosphere.

Jupiter’s massive size means it has an immensely strong gravitational presence, consequently pulling in all sorts of objects in its vicinity.

But, these interactions are over and done in a matter of seconds.

Chappel was lucky enough to capture the apparent impact, but didn’t at first realize he did. Instead, the photographer later spotted it thanks to a software called Detect, which is designed for exactly that purpose. 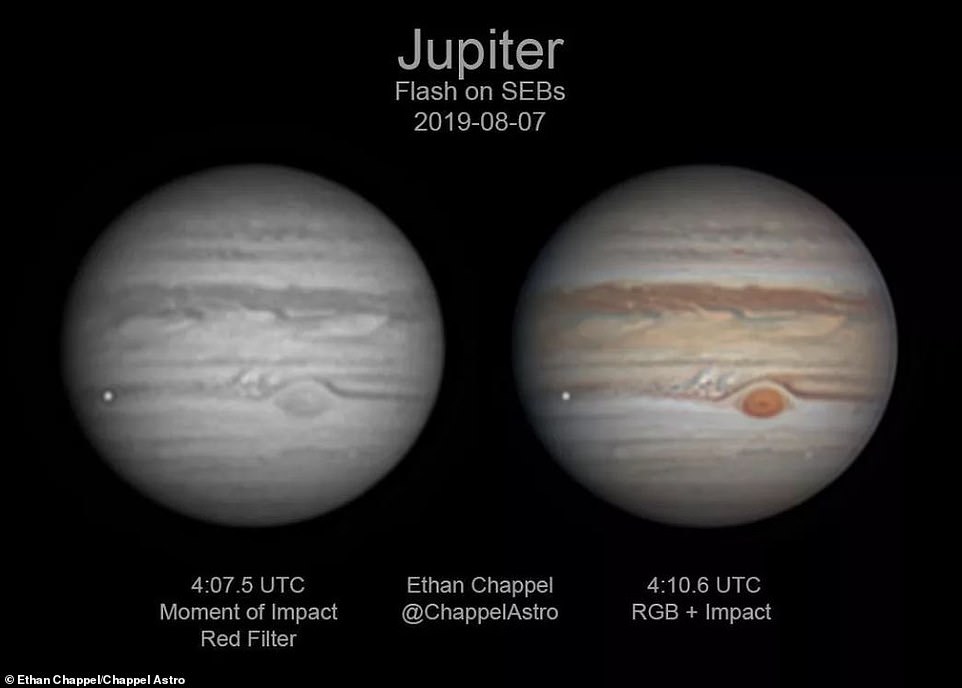 While scientists have yet to confirm what exactly happened on the surface of our solar system’s largest planet, the photographer notes it ‘looks awfully like an impact flash’

Separably, NASA released a new high-definition picture this week that reveals the giant planet’s trademark Taken in visible light on June 27 as part of the Outer Planets Atmospheres Legacy program, or OPAL, it was only publicly released this week.

Hubble’s Wide Field Camera 3 captured the shot when Jupiter was 400 million miles from Earth and almost directly opposite the Sun in the sky.

Among the most striking features in the image are the rich colors of the clouds moving toward the Great Red Spot, a storm rolling counterclockwise between two bands of clouds.

All of Jupiter’s colorful cloud bands in this image are confined to the north and south by jet streams that remain constant, even when the bands change color. 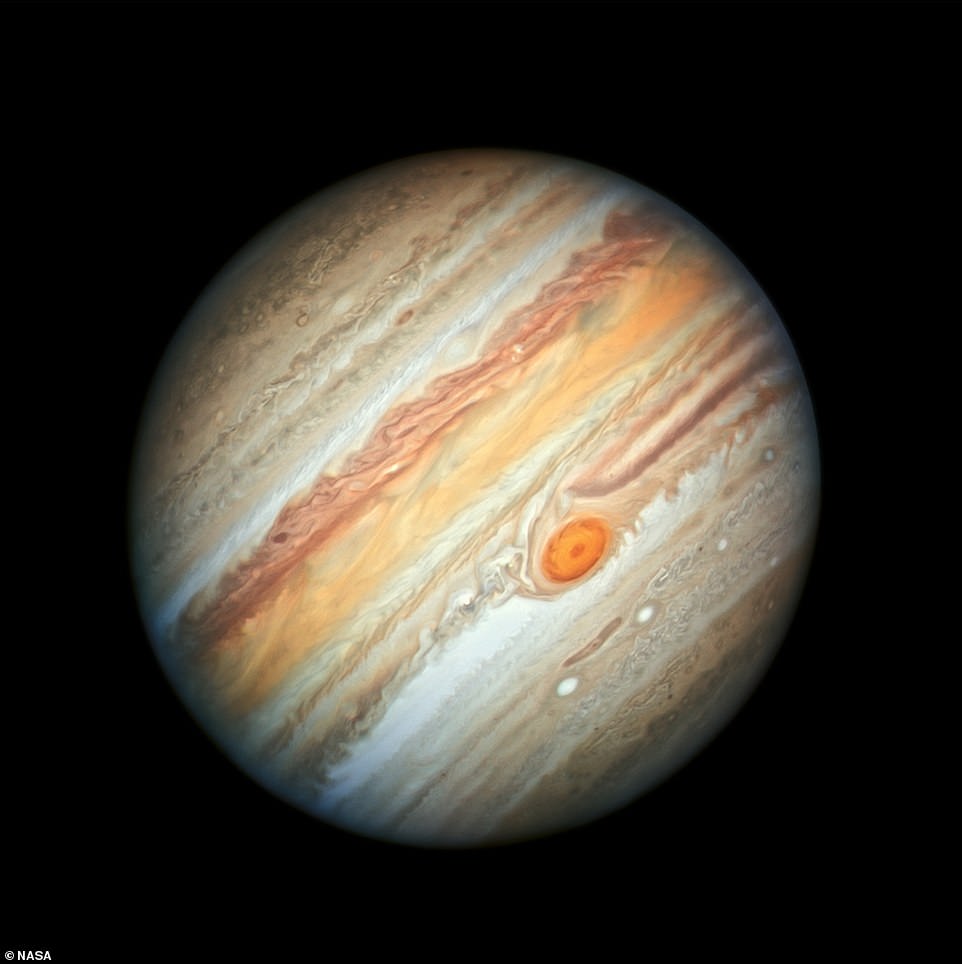 High-definition: Hubble’s Wide Field Camera 3 captured the shot when Jupiter was 400 million miles from Earth and almost directly opposite the Sun in the sky

The bands are all separated by winds that can reach speeds of up to 400 miles (644 kilometers) per hour.

The bands are created by differences in the thickness and height of the ammonia ice clouds.

The colorful bands, which flow in opposite directions at various latitudes, result from different atmospheric pressures. Lighter bands rise higher and have thicker clouds than the darker bands.

On the opposite side of the planet, the band of deep red color northeast of the Great Red Spot and the bright white band to the southeast of it become much fainter.

The swirling filaments seen around the outer edge of the red super storm are high-altitude clouds that are being pulled in and around it. 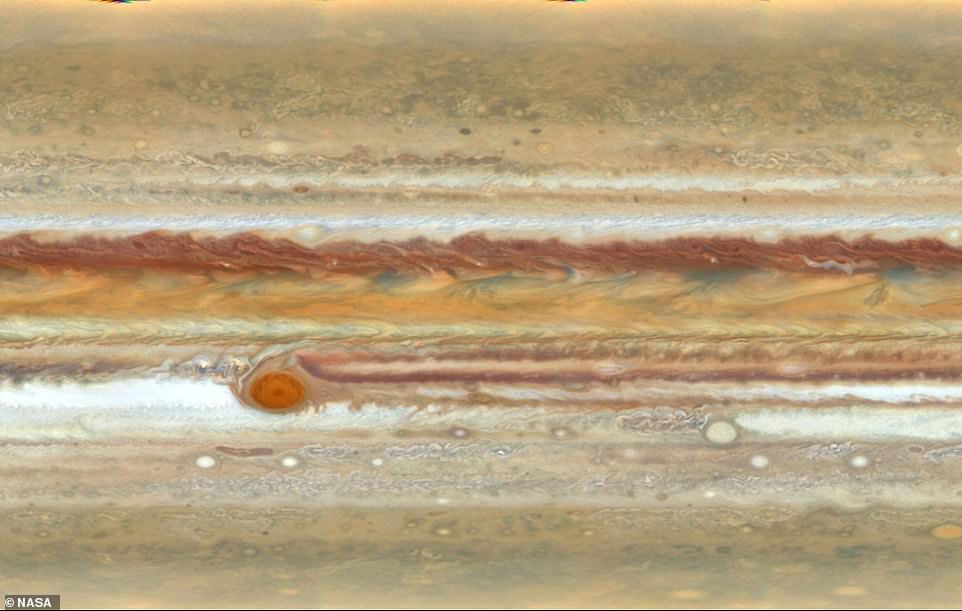 Detail: This Hubble Space Telescope image highlights the distinct bands of roiling clouds that are characteristic of Jupiter’s atmosphere. The view represents a stretched-out map of the entire planet. Researchers combined several Hubble exposures to create this flat map, which excludes the polar regions

Experts have studied recent evidence gathered from Nasa’s Juno spacecraft to reveal the reason why gases form bands on Jupiter.

Clouds of ammonia at Jupiter’s outer atmosphere are carried along by jet streams to form Jupiter’s regimented coloured bands.

Jupiter’s jet streams reach as deep as 1,800 miles (3,000 km) below Jupiter’s clouds, which are shades of white, red, orange, brown and yellow.

The gas in the interior of Jupiter is magnetised, which researchers believe explains why the jet streams go as deep as they do but don’t go any deeper.

There are also no continents and mountains below Jupiter’s atmosphere to obstruct the path of the jet stream.

This makes the jet streams on Jupiter simpler than those on Earth and cause less turbulence in it’s upper atmosphere.

The Great Red Spot is a towering structure shaped like a wedding cake, whose upper haze layer extends more than 3 miles (5 kilometers) higher than clouds in other areas.

The gigantic structure, with a diameter slightly larger than Earth’s, is a high-pressure wind system called an anticyclone that has been slowly downsizing since the 1800s. The reason for this change in size is still unknown.

A worm-shaped feature located below the Great Red Spot is a cyclone, a vortex around a low-pressure area with winds spinning in the opposite direction from the Red Spot.

Researchers have observed cyclones with a wide variety of different appearances across the planet. The two white oval-shaped features are anticyclones, like small versions of the Great Red Spot.

Another interesting detail is the color of the wide band at the equator. The bright orange color may be a sign that deeper clouds are starting to clear out, emphasizing red particles in the overlying haze.

London’s Congestion Charge Zone to have a 20mph speed limit from...

Tokyo launches six-foot robots to help visitors ahead of 2020 Olympic...

Study finds Britons may be falling out of love with Westies