When George Osborne launched the Office for Budget Responsibility in 2010, the goal was to establish independent oversight of economic forecasting and how taxpayers’ money is spent.

It was intended to bolster the Tory reputation for fiscal responsibility.

He might never imagined that nine years later, chairman Robert Chote and his team would produce an excoriating report attacking Tory leadership candidates for fiscal irresponsibility, and fretting over the cost of a No Deal Brexit.

Reckless? Boris Johnson has pledged to cut taxes for higher earners if he becomes Prime MInister while entertaining the possibility of a No Deal Brexit

It must be said that the OBR does not intentionally approach budgets or Brexit with a political agenda.

Forecasts are based on established economic models, and when it comes to Brexit it largely relies on the expertise of the Washington-based International Monetary Fund (IMF).

This has not prevented the OBR from being strongly criticised by Brexiteers for poor forecasting.

It has been lumped in with other so-called experts as an elitist group seeking to undermine the case for Britain leaving the European Union.

As with many forecasting groups, its projections for the economy in the post-referendum period proved wrong.

It underestimated growth in output, the astonishing improvement in the jobs market and the speed at which the public finances would turn around.

But it has been honest and brave enough to adjust and change its forecasts as reality changed. What shines through in the body’s freshly released ‘Fiscal risks report’ is frustration.

The OBR fears that all the hard work, which has seen the budget deficit shrink from £150billion to just £22billion or so in the last financial year, could be destroyed.

Crucially, after years of adding to the national debt – the accumulated borrowing of successive governments – under the current leadership of Chancellor Philip Hammond, debt is finally starting to shrink as a percentage of national output or GDP.

Following almost a decade of tight public spending settlements and austerity, it was inevitable that the dam would eventually burst. 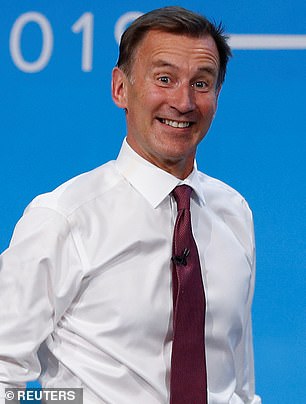 Hammond was effectively dragooned into accepting a new generous settlement for the National Health Service, which has been creaking under the pressure of an ageing population.

The Chancellor agreed to spend an extra £27billion a year on the NHS without precisely saying where the money would come from.

The pledge, made by Prime Minister Theresa May to mark the 70th birthday of an untouchable NHS, was, the OBR says, a break with ‘the Treasury’s usually firm grip on public spending’.

This might not have mattered very much if the country was not careering towards a No Deal Brexit.

After all, higher than expected employment levels, together with rising real wages and robust consumer spending, have meant that tax receipts have been far stronger than forecast.

Along with a tight grip on spending, this yielded the much-talked-about budgetary headroom of £26billion.

It was never really that much anyway, as some £10billion already had been pre-allocated for re-jigging the Government accounts for student loans.

At the time of Hammond’s spring statement, the OBR projections were based on May’s Brexit deal winning approval, and a relatively smooth departure from the EU which minimal fiscal disruption.

The OBR has moved the dial up a notch by basing its future budgetary forecasts on the IMF’s midway Brexit projections, based on a relatively frictionless No Deal where all sides agree to trading relationships outside the EU.

The impact of this on the public finances would be a cost of £30billion a year from 2020-2021 onwards, the OBR estimates, effectively swallowing the headroom more than twice over.

A disruptive, disorganised, unprepared Brexit – which might lead to a severe recession – could open up a crater-sized hole in the public finances.

Given these known unknowns, it might have been thought that the Tory leadership candidates Boris Johnson and Jeremy Hunt would have been circumspect with their tax reduction and spending promises.

After all, they have yet to see the government books and have no idea of how expensive leaving the EU might prove.

Chote and his OBR colleagues can barely hide their contempt for uncosted promises made by the leadership contenders.

They argue that the bills for spending as if there is no tomorrow could ‘increase government borrowing by tens of billions of pounds if implemented’.

They say ‘all the signs point to a fiscal loosening and less ambitious objectives for the management of the public finances’.

The reality is that if the Tories want to have any chance of hanging on to power, they may have little choice but to ease the purse strings.

In the aftermath of the financial crisis it was low interest rates, repairs to the banking system and £435billion of quantitative easing which kept the economy afloat.

But with the labour market close to full capacity, and bank rates at the relatively low level of 0.75 per cent, there is a limit to what monetary policy can do.

Self-financing tax cuts and sensible spending decisions on infrastructure, science and technology may be required to cushion the shock of Brexit.

That is a very different proposition to the unhinged policies of candidates aiming for Number 10.

'It's Not the Economy Anymore, Stupid'