It is exactly a decade since one of the most spectacular public falls from grace ever seen exploded into life with a sensational sequence of events, starting with a minor car crash in a quiet, gated community in Florida during Thanksgiving.

The journey to redemption has been an arduous one for Tiger Woods, a path that took him 10 years to trawl. It was such a long and torturous way down from the top.

The world’s first billionaire golfer – who Nike built their entire golf business on – was perhaps the most famous sportsman in the entire world at this point. A mixed-race man from modest beginnings had taken on the rich, privileged and very white world of golf and beaten it into submission. 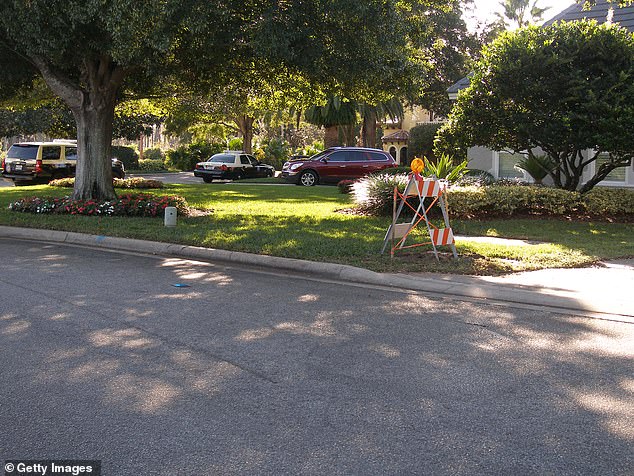 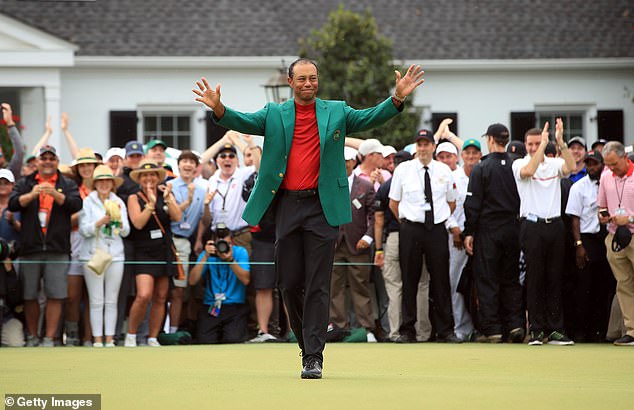 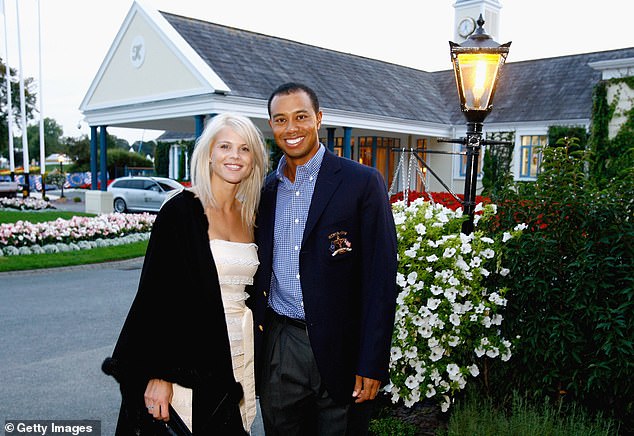 Woods pictured alongside Erin at the K Club in Ireland, for the 2006 Ryder Cup

He became the darling of corporate America, trading off not only superhuman feats on the golf course but also a squeaky-clean reputation as a doting family man. This was to be exposed as a staggering lie.

His wife, Elin, was to be humiliated by the revelations that would follow of his scarcely believable double life, so well had he hidden his secrets from her for so many years.

But he could not hide forever. Elin had become suspicious over his erratic behaviour and her worst fears were confirmed after spotting a text on her husband’s phone while he was unconscious, dosed up on sleeping pills.

She found other texts to the unfamiliar number, including one that read: ‘You are the only one I’ve loved.’

Elin replied, impersonating her husband: ‘I miss you. When are we seeing each other again?’ She received a prompt reply and decided to call the number.

Then all hell broke loose. Elin’s fury woke Tiger – only just – from his painkiller and sleeping pill-induced slumber and, in a daze, he tried to desperately flee her wrath in his SUV.

He was so drowsy and sluggish, however, that he veered into his next door neighbour’s yard, driving over a fire hydrant and colliding into a tree. Elin followed enraged, smashing the windows with one of his golf clubs before police were called and an ambulance arrived.

Woods’ mother Kultida was staying at his home at the time. As she went outdoors to investigate the commotion, she saw her son being taken away by paramedics. According to Jeff Benedict and Armen Keteyian’s comprehensive biography Tiger Woods, his eyes were rolling into the back of his head.

There was now no going back. The National Enqurier soon broke a story of an affair Woods had been having with Uchitel.

The revelations would not abate. At the latest count, it was claimed Woods had cheated on his wife with 121 different women. 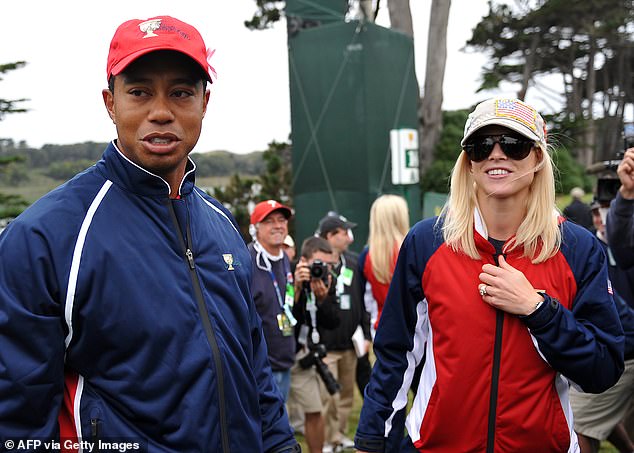 Woods’ wife, Elin (right), smashed the windows of the vehicle he had crashed with a golf club 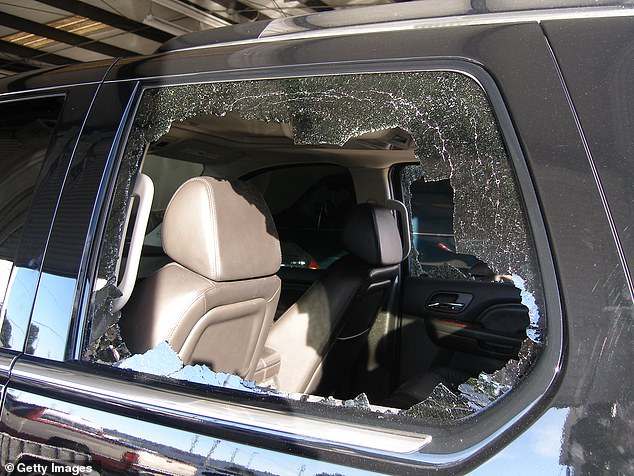 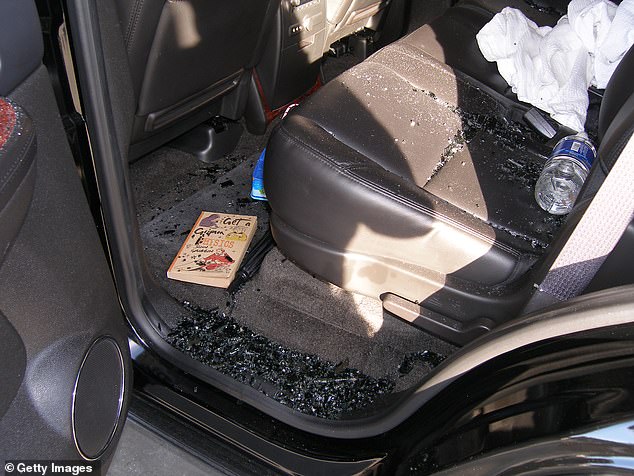 He had been leading an extraordinary double life, winning tournaments so prolifically – including 14 majors – that he was sure to go down as the greatest player of all time, while maintaining a carefully constructed surface image… yet also while behaving promiscuously, relentlessly, away from the public eye.

Who, in his circle, knew the truth? Michelle Braun, who once ran an escort service and claimed to have set Woods up with women, told Vanity Fair that his friend Bryon Bell would usually orchestrate the trysts, but sometimes Woods would call her saying: ‘I’m going up to L.A. for a meeting. You got anybody in Orange County today?’

John Merchant, a former advisor to Woods who was dismissed by the golfer in the early stages of his career after a row with his father, believes meeting people such as Michael Jordan was a mistake and contributed to him being led astray.

Merchant said to Vanity Fair: ‘I told him, “Stay away from that son of a b****, because he doesn’t have anything to offer to the f****** world in which he lives except playing basketball, which he did yesterday.”’

Jordan for his part, has said he thinks Woods regrets his behaviour but has never commented on suggestions that his influence was a bad one.

Woods’s long-serving caddie, Steve Williams, was insistent that he had no idea about the American’s behaviour. It was, in fairness to those who thought they knew Woods well, incredibly well hidden, even from those closest to him. And even when Woods was asked about the morality of what he was doing, remorse did not seem to exist.

Woods spent a lot of time in Las Vegas, where one woman, Jamie Jungers, claimed to have once asked about his marriage after spending the night with him.

Woods claimed it was ‘good’ before later telling her to save his number in his phone under a different name.

‘Every time I would fly out to see him or schedule itineraries or anything, I would always go through Bryon,’ she said. 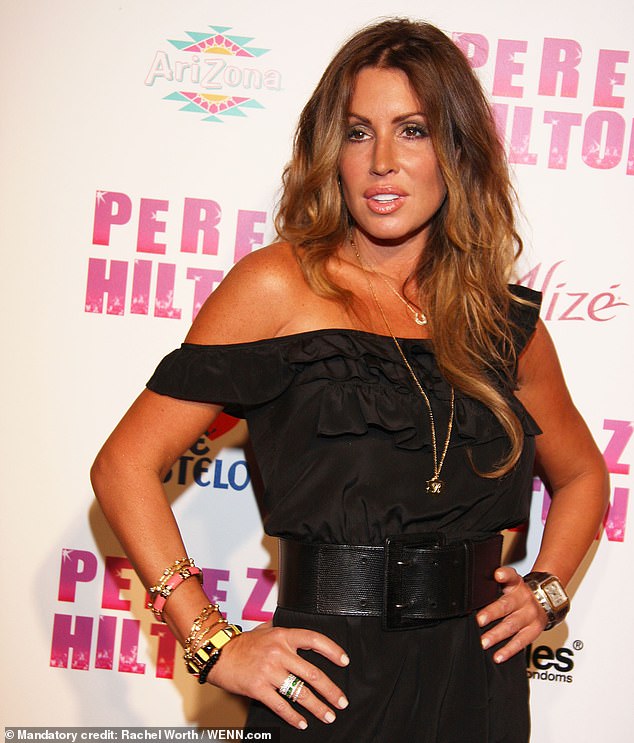 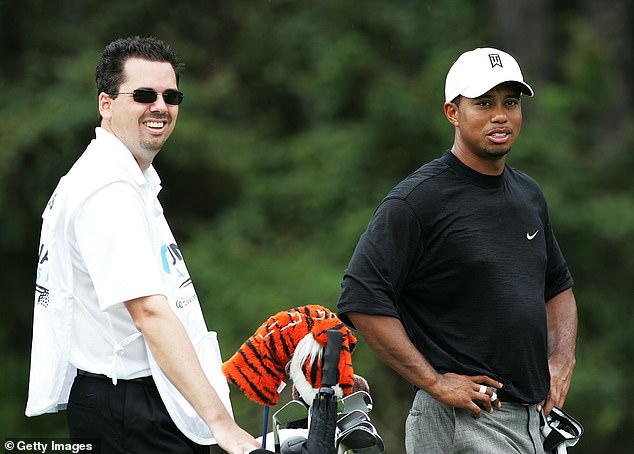 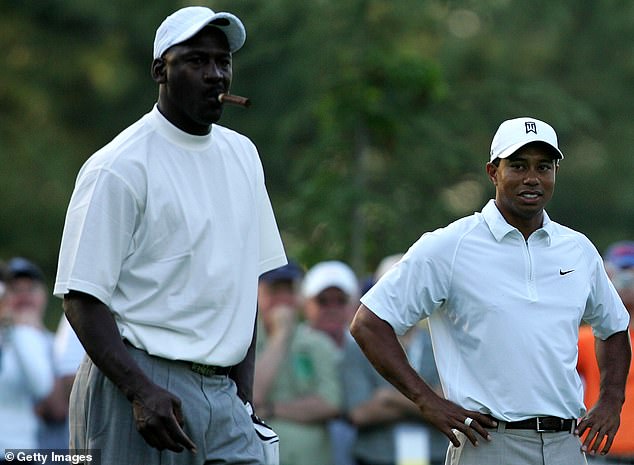 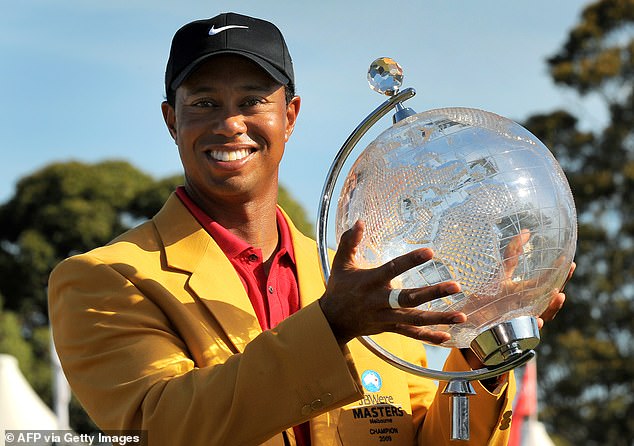 Days before his life was ruined by scandal, Woods won the Australian Open in Melbourne

Only days prior to the first emergence of his infidelities, Woods’ aura of invincibility reached its zenith. He had just won the Australian Masters by two shots and had pocketed a $3million fee just for turning up.

He was handed a gold jacket – traditionally awarded to the victor in Melbourne – and, as he stood in his traditional red shirt and Nike cap, he was handed the trophy; a silver globe. Woods quite literally had the world in his hands.

But away from the tournament at Kingston Heath, the tide was slowly beginning to turn against him. Uchitel had flown to Melbourne to meet Woods in his hotel suite in Melbourne but was followed, and then confronted, by a reporter from the National Enquirer. She fled but when Tiger returned to the United States, he knew a horrifically damaging story was about to break.

Yet the media frenzy that followed in America was unprecedented, beyond what he could have anticipated in his worst nightmare.

According to the BBC, Woods made the front page of the New York Post for 20 days straight as the scandal rumbled on – surpassing a record set by the Post’s coverage of September 11.

On December 2, one woman came forward with proof a 31-month affair with Woods, claiming to have met him shortly after his Masters win in 2007, two months before his first child was born. Woods released a statement hours after that story broke, acknowledging ‘transgressions’ and admitting that he ‘is far short of perfect’.

Woods released a further statement on his website on December 11 announcing his indefinite break from golf to ‘focus my attention on being a better husband, father and person’ but he was eventually divorced by Elin in 2010, costing Woods a reported $100m.

It wasn’t until February 19 that Woods spoke publicly at a press conference in Florida, where his mother was sat in the front row. 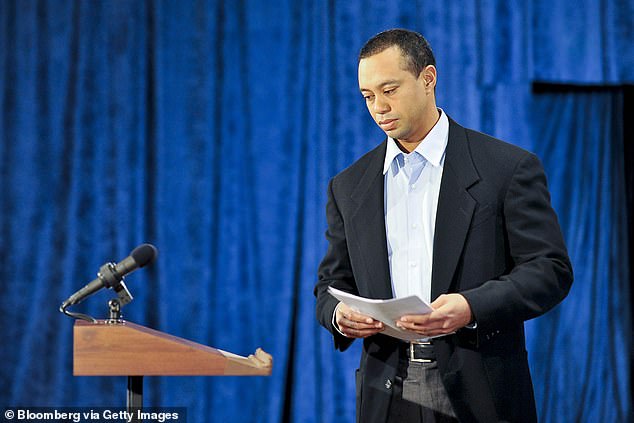 Woods gave a press conference on February 19 2010, owning up to his poor behaviour 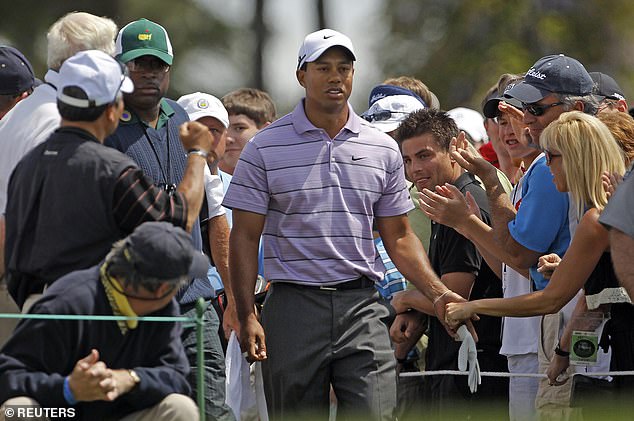 ‘I was unfaithful. I had affairs. I cheated. What I did was not acceptable,’ Woods said. ‘For all that I have done, I am so sorry. I have a lot to atone for. I have let you down and I have let down my fans.’

He eventually returned to golf at the 2010 Masters, where he was berated by the chairman of Augusta National, Billy Payne, for his behaviour.

‘He disappointed all of us,’ Payne said at a now infamous news conference. ‘And more importantly, our kids and our grandkids. Our hero did not live up to the expectations of the role model we saw for our children.’

Remarkably, on one of the most gruelling courses on the PGA Tour, Woods finished fourth in that year’s Masters. A steady return to golf ensued and off the course, he began dating skier Lindsay Vonn in 2013. He also won five times that year and looked back to his best as a player.

Woods had started battling fitness issues off of the course, though. They first emerged during his truly remarkable win at the 2008 US Open, where he triumphed despite suffering from a broken leg and a torn anterior cruciate ligament in his knee. But in 2014 he withdrew from the final round of the Honda Classic with a back problem that required months of rest and, eventually, his first surgery for a pinched nerve. 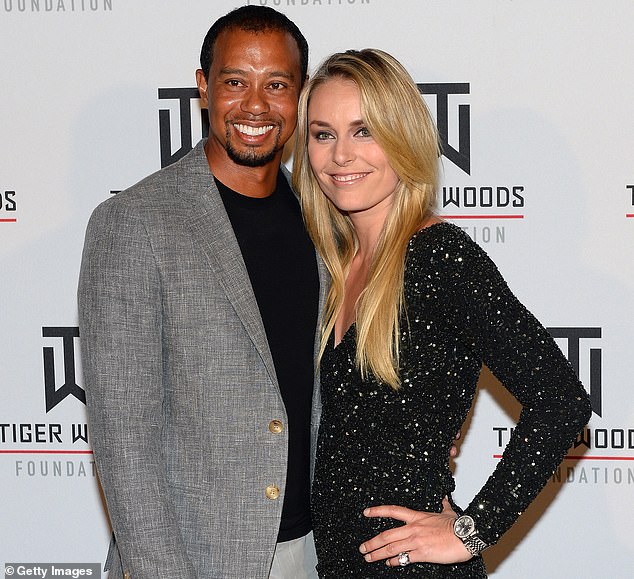 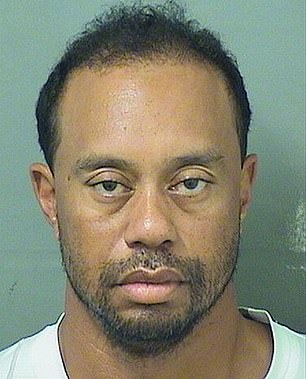 It was the first of four serious operations Woods has had to try and fix the issue, with the last being spinal fusion surgery in April 2017. The last operation meant Woods had to return to taking the painkillers he had become dependent upon years ago. It didn’t end well – police found him asleep at the wheel of a car with his engine running and arrested him. His mugshot went across the world and a police report said he ‘had extremely slow and slurred speech’ and was ‘co-operative’ and ‘confused’. No alcohol was involved.

But Woods fought past the humiliation. He returned to competitive action at the Hero World Challenge in the Bahamas and in 2018, finally and unforgettably, amid delirious scenes and surrounded by fans now rooting for their fallen idol, returned to the winners’ circle when he emerged victorious at the season-ending Tour Championship at East Lake Golf Club.

It set Woods on his way to his incredible triumph at Augusta this year, perhaps the pick of his 15 major titles.

There was a fleeting moment of silence as Woods tucked away a putt a little over a foot long to seal his fifth green jacket on Sunday, April 14. It was almost a moment of disbelief not just that at the age of 43 he had won another major, 10 years after his last, but more where he had fought back from to return to the winners’ circle.

Overcome by a moment and a rush he thought he may never experience again, Woods roared in exultation along with the thousands that had crammed in around the green.

There were so many times during the last decade where that picture and that moment felt consigned to the past and yet when it finally reemerged, there was still a strikingly familiar feel about it.

But what followed was perhaps different. Woods headed straight towards his mother, Kultida, who was with his two children, Charlie and Sam, and his girlfriend of two years, Erica Herman. 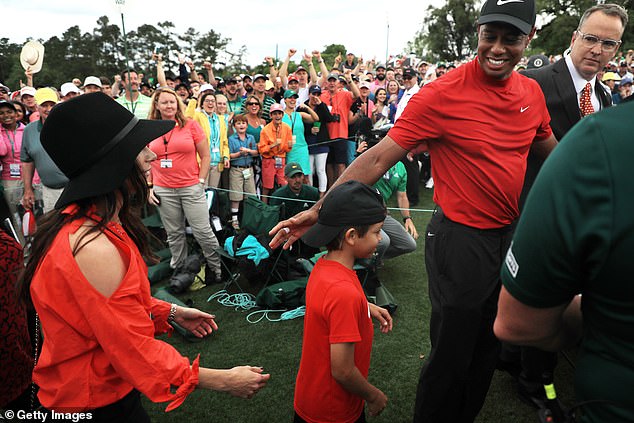 As Woods won the 2019 Masters, he headed straight for girlfriend Erica Herman and his kids 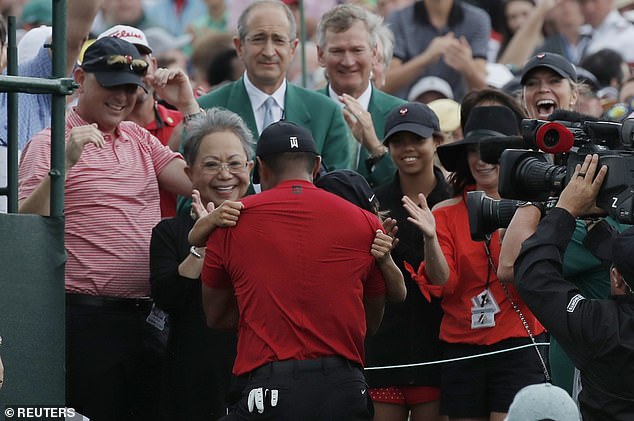 Woods also headed over to his mother, Kultida, after sealing his 15th major triumph 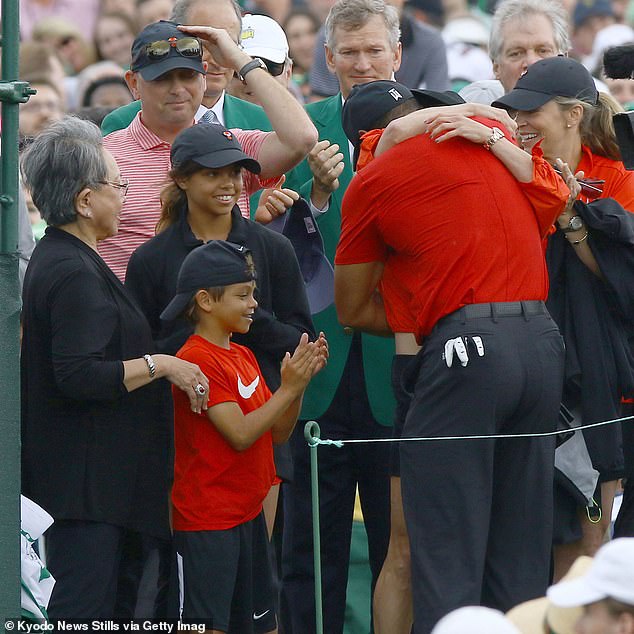 Woods admitted in the aftermath that his victory made him feel that he had come full circle. Redemption had been completed.

‘I think he achieved more as a person in the last decade,’ Rory McIlroy told the BBC. ‘That side of him has really blossomed because of all the stuff he’s had to go through.’

Now, Woods has already been plotting his schedule for the 2020 season up to where he defends his Masters title.

His future is surely a calmer one – another major title may never come his way and his pursuit of Jack Nicklaus’ haul of 18 may fall short – yet despite the events of November 27, 2009, his status as golf’s ultimate ambassador somehow, extraordinarily, remains in place. 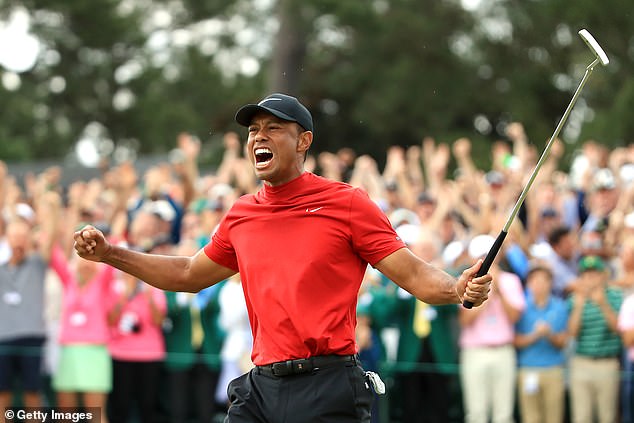 Southampton vs Burnley Premier League LIVE: Follow all the action from St Mary’s as it happens

Southampton tell Charlie Austin he can leave this month amid Leicester...